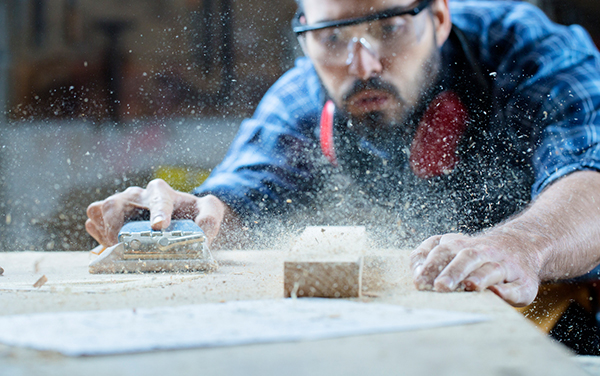 Carpentry is one of the trades with the highest demand for new workers. Photo: File.

There has never been a better time to begin a career as a tradesperson in Canberra, as the construction sector struggles to meet the demands of a growing industry.

Figures released by the Commonwealth’s Department of Employment show that the demand across all construction trades will increase by 9.2 per cent on previous estimates during the next five years.

The figures show the total number of construction trade workers is anticipated to increase to more than 445,000 nationwide by May 2024, compared with the 407,600 construction trades workers estimated to be active during May 2019.

“When you factor in the number of construction trade workers who will retire or leave the industry over the next five years, that means the required intake of new construction trades workers is massive,” Mr Hopkins said.

“In the ACT, the construction sector is the second-largest private sector industry, employing around 20,000 people, but as Canberra continues to grow, we need more qualified tradespeople to meet demand,” he said.

Nationally, more than 37,000 construction trades workers are required to meet projected demand during the next five years.

The figures predict that more than 16,000 carpenters and joiners will be required.

They also predict a shortage of plumbers. In May this year, there were more than 80,000 plumbers; it is estimated a further 7700 will be needed by 2024.

There is a similar demand across other trades, with another 8.7 per cent more painting trades workers required, along with 5.8 per cent more bricklayers and stonemasons.

Mr Hopkins said Master Builders ACT has been training and hiring construction apprentices in the ACT for 50 years and will commence a new cohort of carpentry apprentices in January next year.

“Construction apprentices can enjoy a long and rewarding career with safe and secure employment, skills which can be used internationally, and well-paid employment while they study,” Mr Hopkins said.

“We are calling on anyone looking to start a carpentry apprenticeship in 2020 to contact the MBA and find out how they can join this growing industry.”

Lucy McGarva - 3 minutes ago
Janelle McGarva , what's your pick? View
Danielle Woodhouse - 35 minutes ago
Look at You Suzy! View
Robert Gannon - 2 hours ago
Foot in both camps , live in Wagga Wagga and Suzy is my niece 😎... View
News 104

Matthew Maguire - 8 minutes ago
We will see a similar post to this in 5 years, 10 years and so on. Like the Very fast train, nothing will happen. It never do... View
Michelle Gilbey - 35 minutes ago
Rail from CBR to Yass then to SYD/MEL View
Jack Fowler - 40 minutes ago
High speed rail now View
Breaking 74

Helen Topor - 33 minutes ago
Krystyna Topor a friend thought she was fainting (she was standing at the time). I thought that the shaking might be the begi... View
Anne Barnes - 40 minutes ago
While house shook in Shingle Hill Way Gundaroo View
Sally Asnicar - 54 minutes ago
My bum was plonked in my office chair as usual and I felt nothing. Zip. Nada. On Sydney's Upper North Shore. View
News 33

Speculation around a potential return to Canberra of the Supercars, operating in a circuit around Exhibition Park, has raised the...
News 104

@The_RiotACT @The_RiotACT
As part of Region Media, Riotact delivers news, views and information free to more than 700,000 unique readers every month. We've grown up with Canberra and now we are celebrating with a sleek new look https://t.co/kLK4zpxPwK (32 minutes ago)

@The_RiotACT @The_RiotACT
Chief Minister Andrew Barr said modelling shows #hospitalisations and deaths will increase as jurisdictions begin to reopen, even when the 70 and 80 per cent fully #vaccinated thresholds outlined in the national plan are met https://t.co/XLk2fmaq5q (2 hours ago)