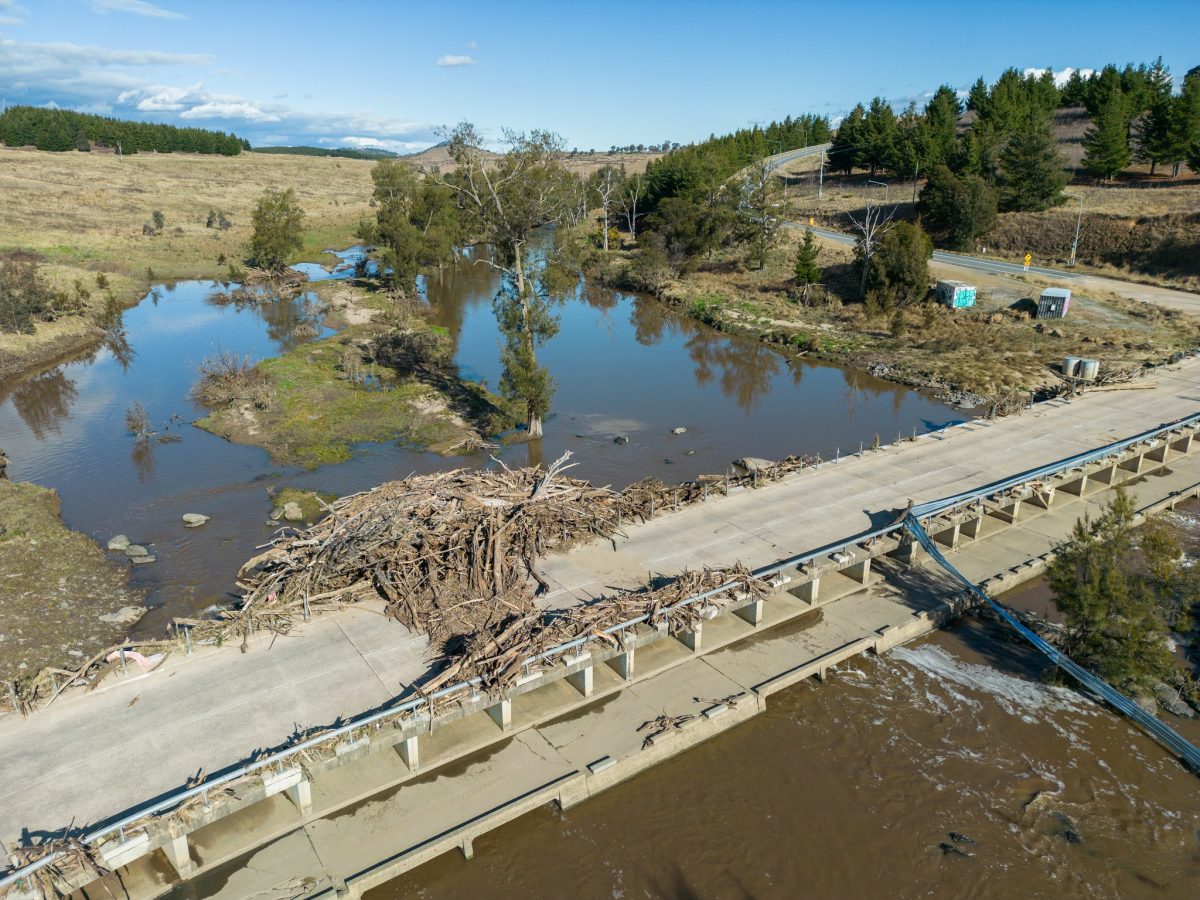 The ACT Government says it has now engaged the services of a specialist contractor to clean up Coppins Crossing and replace the guardrail with concrete barriers. Photo: ACT Government.

Commuters face another one to two weeks of traffic chaos as the government confirms Coppins Crossing will remain closed while a “specialist contractor” comes in and cleans up.

The river crossing, used by around 6000 motorists a day, has been closed since Friday, 5 August, after heavy rain lashed the region.

This led to the flooding of the crossing and huge amounts of debris being swept downstream as water had to be released from Lake Burley Griffin through Scrivener Dam.

It’s frustrating residents in Belconnen and the rapidly growing Molonglo Valley region who now face up to 40 minutes of additional commute time every day.

For families who live in Whitlam and have children who attend the school – which they are zoned for over the river in Denman Prospect – the five-minute school drop-off has become at least 15 minutes.

An exact date has yet to be set for the reopening of the crossing, with the government warning that the seven to 14-day timeline depends on the weather and the bridge passing a safety assessment.

The Territory government says Coppins Crossing will be open in one to weeks thanks to the services of a “specialist contractor”.

It said a “large amount” of debris from the low-level crossing will be cleared by the contractor and the damaged guardrails will be replaced by concrete barriers.

The ACT Government thanked Canberrans for their patience.

But for the 6000 or so motorists who traverse the crossing every day, patience is in short supply.

Residents of both West Belconnen and the Molonglo Valley say they feel as though the government has forgotten them despite its major expansion plans on both sides of the river.

One Belconnen resident described the roads as “archaic” and “unmanageable”.

Others argued that work should have begun on the new bridge well before all of the suburbs and infrastructure were built in the area, not as an afterthought. 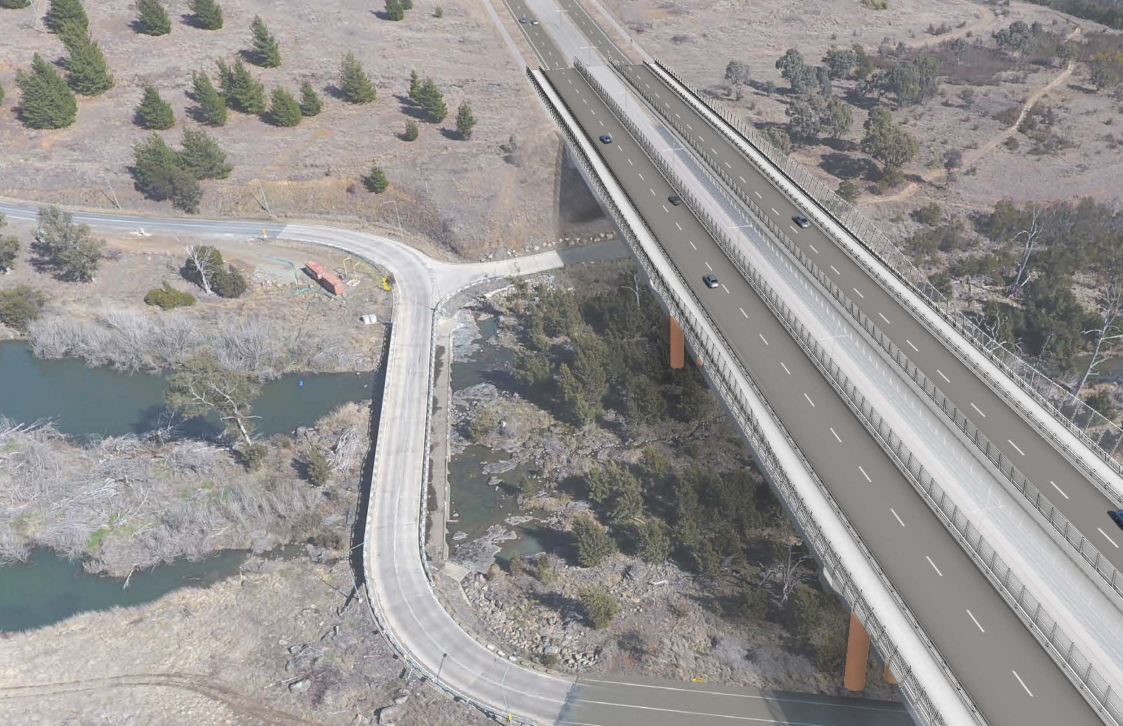 An artist’s impression of the completed bridge will look like in 2025. Image: Supplied.

Yet more locals called for the $175 million four-lane bridge project to be sped up.

But Transport Canberra and City Services officials have already warned there might be delays to the existing timeline due to worldwide materials shortages and supply chain issues.

The bridge is scheduled to be completed and open to traffic by the end of 2025.

Those same officials have sought to stress the current ‘clean-up’ job is complex and will require skilled attention.

The operator of the site Is Coppins Crossing Open, Andrew, who does not want his last name published, isn’t calling for the new bridge build to be sped up. He is, however, renewing calls for better signage so commuters at least know when the bridge is closed before they drive down the hill and are then forced to turn around.

Earlier this year, the ACT Government did put some signage up, but Andrew said more is needed now.

He’s also called on the government to employ workers of its own who would be able to clean up the bridge when it floods.

“It’s really disappointing the ACT Government doesn’t have someone available on staff, on a contractor on a pre-approved list who they can get out to clear the crossing,” he said.

Building infrastructure before piling 10s of thousands of people might be a wise idea. Learnt nothing from Gungahlin, now West Belconnen’s turn….
Ginninderry is the next problem but will they do anyting in advance, don’t hold your breath

While waiting for the new bridge, why can’t a simple rubbish catching fence be installed a few metres upstream?

“Simple”? Probably because it would quickly become part of the downstream litter. A steel barrier attached to the concrete was swept away.

Phydeaux,
It’s funny that there are already numerous “simple” rubbish collection structures along this area, that’s exactly what the bridge and other low river crossings achieve in every flood like this.

The problem obviously being that once the debris is “caught”, the flood waters simply rise higher to get around the restriction.

Any kind of rubbish collection device would need to be mechanised to rake the debris away to the shore in real time during a flood.

A working bee could get it done in a weekend lol

I’m sure the Pedal Power people would be happy to get involved in that.

The greens-labor coalition have been promising a higher bridge/flyover for years. As usual they sweep it under the carpet and hope that no-one notices how they keep promising, yet never deliver

I could have cleaned it up quicker

Just build a higher bridge! It was planned & never happened.
It’s cheaper than constantly cleaning up after flooding!!

As a resident of Wright, we’ve noticed the additional traffic. And with Callum St closed in Woden, it forces everyone onto Cotter, Melrose and Hindmarsh Drives.

There is a serious lack of traffic flow management around the Weston and Western part of Woden, lights are not timed to manage the flow which just makes it worse.

It’s surprising that there is no plan for when this happens, but it seems this ACT Government don’t think they’re needing to do things better.

Tom Adam Claiming to be green whilst causing cars to idle for ages at traffic lights.

James, didn’t think about it like that – but it’s a good point.

We should have a working bee, I’m sure plenty of hands make light work

It has been needed weeks if not months ago!

Marcus Harrington we have over 1m in the region. I can assure you there are many international acts… View

Nic White spot on Nic. Canberra residents have the highest disposable incomes in the country. There… View

Ian Napier but they can't do that in Canberra, because 1, the tram is only from G to City, 2. Action… View 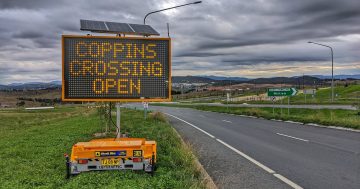