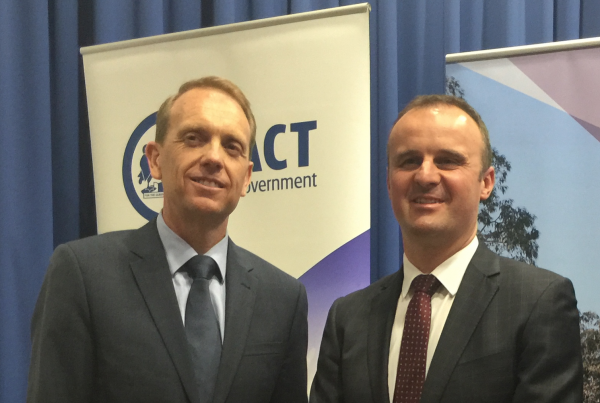 When Simon Corbell and Andrew Barr first met through Young Labor in 1992, they disagreed on just about everything.

Paying tribute to Mr Corbell in reply to the Deputy Chief Minister’s valedictory speech this morning, Mr Barr said that Mr Corbell was secretary of Young Labor when the now-Chief Minister first joined.

The Chief Minister said he had joined the Labor party just after Paul Keating became PM.

“I bounded up to my first Labor meeting with an expectation of finding a group of people who would be passionately behind the Keating prime ministership,” he said.

The then ANU student thought he would present well thought out arguments and engage in debate, before the room would decide that he’d won the day.

“It would be fair to say I think I lost nearly every policy argument in that room at the time,” Mr Barr said.

“In those early days, we didn’t agree on much, but over a 25 year journey, in the Labor Party and the time we’ve spent together in this caucus, I’m not sure whether you’ve become more conservative or I’ve become a little more left wing, but these days I find Simon and I are in agreement on most issues and I am in awe of his record of achievement in this place.”

The Chief Minister said Mr Corbell’s legacy was there for all to see and would be an enduring one.

He wished his longtime colleague well, but said he would probably discourage him from writing letters to the editor in post-Assembly life.

“And if you ever end up writing for City News … ” he warned.

RiotACT asked Mr Corbell afterwards whether he had indeed become more right wing or Mr Barr had become more left wing during their years in the Assembly together.

He smiled, paused, then said, “I don’t think my views have fundamentally changed, but the experience of Government teaches you about how difficult it is at times to achieve reform, and about how there is a need to approach reform sometimes incrementally rather than in an absolute manner.

“So I don’t think my philosophical position or viewpoint has fundamentally changed, but I think my understanding about how change occurs is much better, and I am wiser for how you need to go about realising change, and the patience that is required as part of that, and I hope that perhaps that’s a skill I can take with me to future endeavours.”

@The_RiotACT @The_RiotACT
An array of local and all-star Australian acts will feature at picnic-style entertainment hubs to help Canberra celebrate on Australia Day https://t.co/My7xFBeqRF (5 hours ago)

@The_RiotACT @The_RiotACT
A COVID-19 vaccine program in Australia could roll out as early as next month, but can employees legally refuse to receive it? https://t.co/MCQkZR0IDR (8 hours ago)