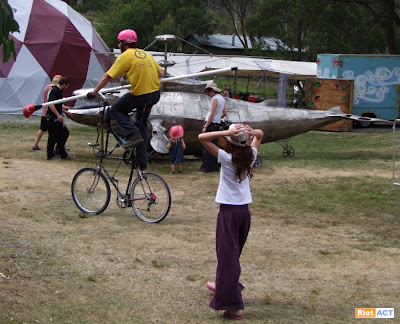 There have been some rumours going around that there wouldn’t be a Corinbank Festival next year.

Fortunately the rumours are only partly true (there will be a hiatus) with a media release hitting my inbox with the following words:

Following the delivery of the third highly successful festival in February 2010, Resonate Pty Ltd has announced that the next Corinbank Festival will take place from 2-4 March 2012.

The Festival prides itself on being at the forefront of sustainable event management. With that commitment to the environment, the need to let the site rejuvenate for a year has become evident, allowing it to regrow and replenish, ready for an amazing year in 2012.

Resonate Pty Ltd will be far from resting on its laurels however, and will use the year to engage in intensive creative development for Corinbank 2012.

“All of us here at Resonate are immensely excited by the opportunity to explore the potential for the next evolution of Corinbank” says Dan Watters, Resonate Director. “We’ve captured some magic in the three years the festival has been running and we’re really looking forward to seeing what we can achieve with a bit of space to be creative”.

I was involved in 2010, it had a great community feel to it as well as being a fabulous music event. Letting the site have a year off for environment reasons sounds like a good idea to me, I’m hoping to be part of the 2012 event.

I was involved in 2010, it had a great community feel to it as well as being a fabulous music event. Letting the site have a year off for environment reasons sounds like a good idea to me, I’m hoping to be part of the 2012 event.

Sad and great news all in one go.
I will miss corinbank next year but i can’t wait to see what they can create with two years of creative development, Very Exciting!!!

Great news….I have only been to one Corinbank and enjoyed it immensely .
It’s a great alternative to the festival norm. And every person I have met that gets involved is proud and passionate about the event, that always says something.

Okay, fine, everyone beat me to it.

Come again? That press release says the exact opposite: that the next festival will be in 2012, and they’re taking a year off…

I read that as confirming the rumour, albeit with the promise that it is coming back the year after.

Yes guys, apologies for my brainfade and thanks for picking it up.

Steven Campbell - 9 minutes ago
Reducing posted speed limit is simply government’s way of running away from their responsibilities. Laws are only as effect... View
Opinion 11

Capital Retro - 15 minutes ago
Nailed it. View
thebscaller - 8 hours ago
So what have you achieved other than self promotion? A message from someone saying that the only hope they have is for a libe... View
Mark Parton MLA - 11 hours ago
Thanks for constructively engaging, but I would reject the characterization of my advocacy for Alex as a media stunt. And I w... View
Opinion 71

Capital Retro - 16 minutes ago
Spot on. What goes on behind the scenes is usually at odds with the "clean & green" propaganda we hear. Just like a wind "far... View
George Watling - 8 hours ago
These things also generate vast amounts of e-waste and carbon pollution. Studies show they last about 9 months before they ar... View
Business 21

Neil Thompson - 21 minutes ago
Andrew Turnbull, great bloke to get on the piss with as well. View
Trevor Hicks - 37 minutes ago
About time 👍 View
Jess Puddick - 2 hours ago
Kimberley love it, so excited for it to be restored! View
Opinion 11

Shane Westmore - 8 hours ago
Absolutely. There’s people voting now who are completely misinformed about anything going on in this country & waste their... View
Nada Krstin - 10 hours ago
oops, meant to say, cannot have it one way! :)... View
Nada Krstin - 10 hours ago
No. And if you think they are mature enough to vote at 16 or 17, then they should be tried for any crimes as adults as well,... View
Opinion 94

George Watling - 8 hours ago
Marc Edwards Spot on Marc. The best way to deal with congestion is decentralize workplaces. If everyone is travelling to a ce... View
Property 1

ACT resident - 10 hours ago
It is unrealistic for the Canberra community to pay for a company’s poor commercial decisions. The risks for CRS, newly reg... View
HiddenDragon - 13 hours ago
"...Capital Recycling Solutions, is in early talks with the government about its costs. It is hoping for an agreeable settlem... View
Lifestyle 1

A major landslide on a regional road between Moruya and Braidwood, in southeast NSW, has virtually landlocked residents, including health...
Business 21

@The_RiotACT @The_RiotACT
Amelia Bidgood ventures off the beaten track to @yarrhwines to try their seasonal Winemaker's Sail ... and can't help but pick up a bottle of their stunning sangiovese https://t.co/vfesq5BVzv (13 hours ago)