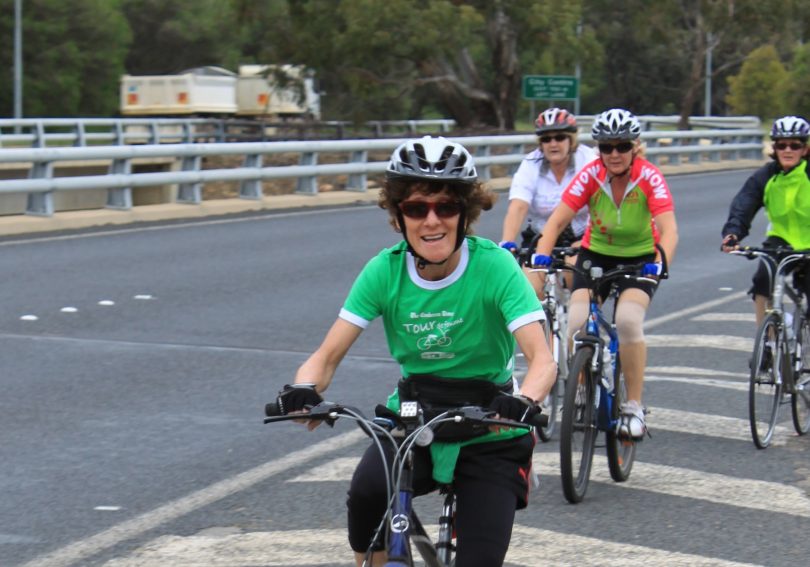 An ACT coroner has recommended that the ACT Government conduct regular safety checks of off-road bicycle paths after it was revealed that it had been warned about a gravel-strewn stretch in Tuggeranong that contributed to the death of a Canberra cyclist.

Chief Coroner Lorraine Walker made the recommendation in her findings about the death in 2018 of Dr Teresa Foce, a psychiatrist working at the Canberra Hospital, who collided with a builder’s trailer on the roundabout at Tharwa Drive and Mentone View in Conder.

Dr Foce had been out riding with her husband, Michael Kearney, when she lost control of her bike while braking to avoid colliding with a utility towing a trailer.

A Transport Canberra engineer’s report after the accident found that gravel had been washed down onto the path from the adjacent nature reserve and the surface was also damaged.

Four years earlier there had been a complaint that the path kept filling up with dirt, and the path had been cleaned in response.

“This makes it incredibly dangerous on a bicycle, since you come down the hill at speed (off the road or the path) are braking and suddenly hit this corner filled with dirt … Could the dirt please be removed and the issue looked into?” the unknown person said.

Since the accident, the path has been repaired and a retaining wall built to prevent debris covering the path.

But Ms Walker said that given the location was previously known to have issues with debris, the ACT Government should institute a regular audit program with frequent inspections of its off-road bicycle paths to ensure that they are appropriately maintained and there are no obstructions or risk of obstruction from the surrounding environment.

Cycling lobby Pedal Power ACT welcomed the recommendation, saying shared paths in the ACT are becoming increasingly hazardous and their condition is deteriorating to the point where complete reconstruction is sometimes required.

Pedal Power CEO Ian Ross said the current level of funding for path maintenance at around $4.7 million a year was not enough to properly manage and maintain the network.

”The ACT Government’s open data portal for cycle crashes shows that hundreds of riders are crashing on our roads and shared paths every year. We must do more to protect riders,” he said.

Mr Ross called for A Path Condition Assessment and a rolling Strategic Asset Management Plan for shared paths, similar to that existing for roads, to be introduced ahead of a rolling program of proactive maintenance.

”Teresa Foce was a valued doctor, a healer in our community. She was a mother, a partner, an athlete and a member of Pedal Power’s cycling community,” he said.

”Her loss is all the deeper because it was avoidable. A well-maintained path network which is regularly and thoroughly assessed for hazards will prevent future crashes.

”The point is well made, it is acknowledged,” he said.