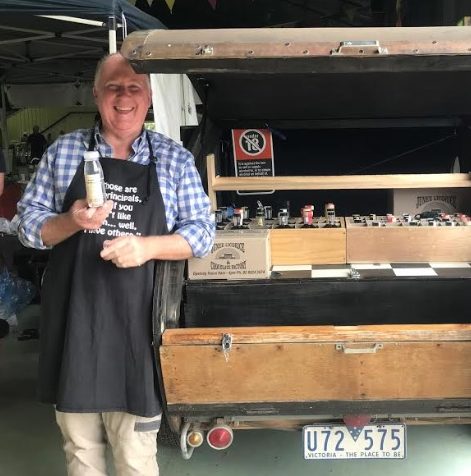 Junee Licorice and Chocolate Factory’s Neil Druce with the hand sanitiser his family is producing to meet demand during COVID-19. Photos: Supplied.

The Druce family of Ardlethan, in southwest NSW, are masters of innovation, and their Junee Licorice and Chocolate Factory is a sweet and lasting reminder of that.

During these times when the health of the nation is challenged due to the COVID-19 pandemic, and many of us are sitting in idle isolation, you’d be forgiven for turning to the immune-boosting, respiratory strengthening properties of licorice.

Or for that matter, whisky.

The Druce family also produces whisky down Corowa way on the Murray River.

But if anyone had stopped them in the street early this year and told them they would be making hand sanitiser, they’d have thought that was crazy.

However, crazy is a term the Druce family has become used to.

Back in the 1960s, when Alan and Jessie Druce started farming organic spelt, wheat, oats and barley on their 1100-hectare Ardlethan property, ‘Green Grove’, there was a view in the local community that they were, possibly, a little bit “out there”.

But, even back then, Alan had become concerned about pollution in the food chain and set about taking steps towards pure food production by eliminating harmful sprays and fertilisers.

Of course, these days “out there” is becoming mainstream and Alan, the advance guard of the international organic grains industry, is now considered more of a master, whom like-minded farmers behold.

And, of course, the innovation didn’t stop with him.

There’s a 20-metre sentinel that stands tall in Junee, which is testament to the drive of his son, Neil Druce.

That sentinel is the historic Junee Flour Mill, which is located just north of the town’s centre – a place constantly bubbling with tourists all year round.

Purchased by the Druce family in the 1990s, it was the first sign that Neil, like his dad, was different. 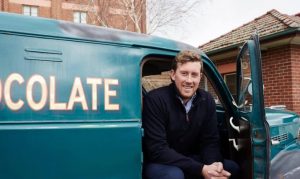 Dean Druce is in the business of chocolate, but he’s also producing whisky and hand sanitiser at his Corowa distillery.

After years working on-farm alongside his parents, it was the loss of their on-site flour mill combined with an excess of grain one year that led them on a search that, for Neil, became a quest to start making licorice from the flour they were producing.

Fate brought them to the old Junee Flour Mill, a landmark local building which had been vacant since the 1970s.

Today, the restored mill is home to the Junee Licorice and Chocolate Factory, which produces 250 tonnes of licorice per year, while acting as one of the town’s major employers and a premier tourist attraction in the Riverina.

So when the Druce family had the opportunity to buy the disused Corowa Flour Mill for $1, it was an opportunity begging for Neil’s son, Dean, who was faced with a surplus of barley and also wanted to try something different.

Today the former flour mill is churning out whisky as the Corowa Distilling Co and it is regarded as one of the top distilleries in the world. It’s also a mecca for the border tourist trade, where visitors enjoy the indoor and outdoor delights in the form of chocolate and fine beverages.

Now the Druce family has answered the call of the community and begun producing hand sanitiser to help meet consumer demand during the COVID-19 pandemic.

In a move that was also considered necessary to keep their teams employed in the face of the tourism downturn, the business repurposed its Corowa distillery to make hospital-grade hand sanitiser that meets World Health Organisation standards.

So while they’re churning out Easter eggs by the dozen in Junee, the operation is making hand sanitiser around the clock in Corowa. 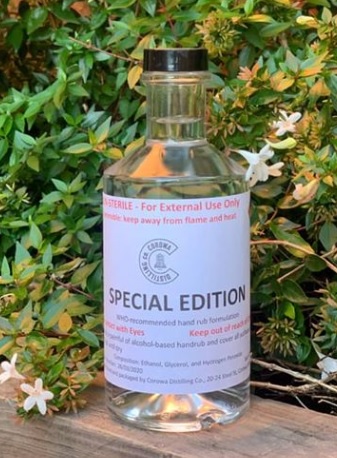 Online demand is exceeding the distillery’s ability to make the hand sanitiser, which is labelled ‘Special Edition’ and being snapped up by individuals and medical organisations throughout Australia.

Neil says making Corowa Distilling Co’s sanitiser has been a challenge, but massive demand from the community emphasises how important the product is.

“In the tourism sector, and as a business person, when you’ve got really good employees and not much work for them, it’s critical to be able to turn around and do something different.

“You’ve got to reinvent yourself and this opportunity has been great for us. But I think for anyone, if you can’t do your normal thing, look at what you can do.”

Tammy, this is the one you, me and ma when to when we visited family in Corowa.

Megan Hume what a good thing to do!

Anja Bolton omg the best!!! Makes me the happiest receptionist when I get to answer these calls multiple times a day 🥰😍🥳

Well done to them:-)

Love their Spelt licorice - but good to see them changing their distillery to meet the current need!

Marcus Markovic oh no no scotch!

Charlotte Barker remember visiting Junee on our trips to Wagga?

Annie May - 3 hours ago
Can't the government even Build tiny houses? So sad .... View
Peter Doyle - 10 hours ago
What has covid done this View
Kelly Emblen - 13 hours ago
Nada Krstin the one in Queanbeyan is for both View
Community 3

assiduous - 9 hours ago
The ACT government is culpable for expensive housing in the ACT. Government spending on support programs is treating the symp... View
Food & Wine 17

@The_RiotACT @The_RiotACT
How do you rate @Channel7’s coverage of the Tokyo Olympics? Given the circumstances, Tim Gavel, who's commentated at seven Olympics, says it's been remarkable https://t.co/YMoHbEE7Md (39 minutes ago)