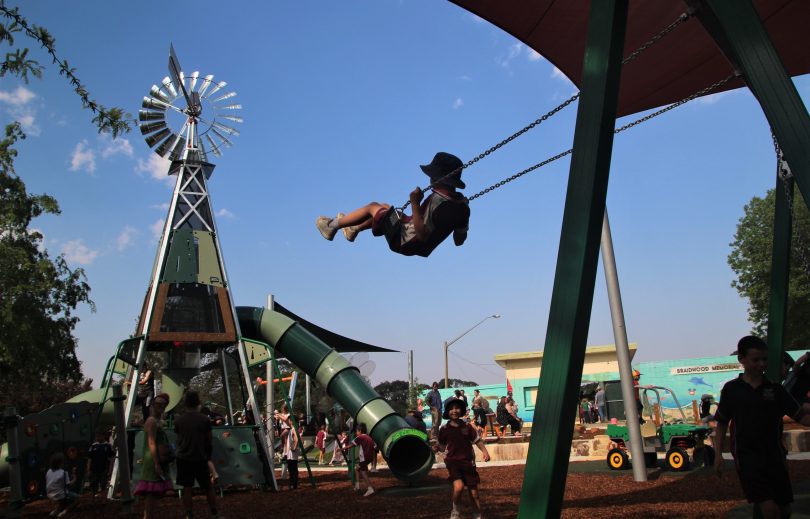 Braidwood welcomed a new playground at Ryrie Park in 2019, and Queanbeyan-Palerang Regional Council is looking to establish a similar play area in Bungendore. Photo: Alex Rea.

Residents of Bungendore are being asked to be like the Braidwood community to establish a major new playground in the town.

Following the success of the Braidwood community’s $400,000 Ryrie Park playground, which opened in 2019, Queanbeyan-Palerang Regional Council is looking to form a community group in Bungendore that will help shape a similar play space in the town.

In its major planning document, the Bungendore Structure Plan 2048, council identified that the town lacks recreation spaces, which has tweaked the interest of the Bungendore Residents Group given council’s proposal to build a $2.5 million car park on the only green space in the heart of the town.

The car park issue is complex for the rapidly growing Bungendore community, which is balancing council’s plan to build the car park with the wishes of many locals who want to retain a green space that will link the town’s two parallel main streets.

“An existing green space, central in Bungendore, is already established and landscaped, complete with buildings, and is scheduled for bulldozing,” the Bungendore Residents Group posted on it’s Facebook page. “You cannot make this stuff up.”

Secretary of the Bungendore Residents Group Kerry Doutch told Region Media they are happy to assist where possible with council’s planning of the town.

Ms Doutch said she was unsure of the need for a playground, but the most likely area for it would be the newer Elmslea estate, near the existing skatepark.

“People in the town with kids are going to want a safe space that is close by,” she said. “There is plenty of room near the skatepark which also has toilet facilities and an area nearby that includes an off-leash dog park.”

Queanbeyan-Palerang Regional Council Mayor Tim Overall has called on the community of Bungendore to join forces with council’s urban landscapes team to explore possibilities for a new playground.

“Young families have limited options when it comes to playgrounds in Bungendore,” he said. “The only significant playground is an ageing one at Mick Sherd Oval.”

Mayor Overall said the council has had great success working with a dedicated group of local Braidwood residents who helped design and fundraise for the new playground at Ryrie Park that opened in November 2019.

“With the community’s support, council was successful in applying for grant funding to deliver a $400,000 project that features a central spinning windmill climbing frame that was how the community wanted the playground to represent Braidwood,” he said.

Council’s urban landscapes team worked closely with the Braidwood Community Association throughout the planning and development of the Ryrie Park playground.

“The project was a true partnership between the community and local government and has resulted in a magnificent outcome,” said Mayor Overall.

“Council would now like to form a working group with Bungendore residents to determine their needs and aspirations and help develop a new playground for the children of Bungendore.

“We are seeking around six-to-eight community representatives willing to volunteer some of their time to share ideas that can guide council’s planning for a new playground.”

Mayor Overall also said the working group will operate informally and will evolve as the project progresses, dependent on the ideas put forward.

Expressions of interest can be emailed to council@qprc.nsw.gov.au before 30 June.

Capital Retro - 4 hours ago
The "science" is yet to be proven. The main "tool" they have is computer modelling which can be contrived and most scientists... View
MERC600 - 6 hours ago
@maya did you receive your free roof insulation from that kind Mr Rudd ? Perhaps now with this insulation your hoose is a lit... View
Futureproof - 8 hours ago
There's science and there's follow the money science, like the great scientific mind of school drop out, Greta Thunberg, alon... View
News 62

Marisa Navarro - 6 hours ago
Linda Navarro i’ll just keep them! View
Bek Clark - 7 hours ago
Lucinda it depends on the category; and while it was a different specialty I can confirm, private specialist consult with a d... View
Paige Johnson - 7 hours ago
Why though? Shortage of staff/surgeon? I’m genuinely curious to know why. View
Community 3

Capital Retro - 12 hours ago
While getting the snow report from Thredbo this morning the ABC 666 presenter was reminded of building a "snowperson" in youn... View
News 40

Mark Hall - 14 hours ago
Didn't even get to first base - mobile number is already registered when I try to sign up even though my e-mail is not regist... View
show more show less
*Results are based on activity within last 7 days

ACT Minister for Transport Chris Steel has rejected suggestions the planned construction of the bridge across the Molonglo River at...

The National Capital Authority has approved early works to support the $500 million expansion of the Australian War Memorial, despite...
Opinion 34

@The_RiotACT @The_RiotACT
The wrestling career of Canberra's @mikey_broderick has taken him around the world. Now he is back in town in a show for the whole family https://t.co/JBxA8ZEQg7 (1 hour ago)