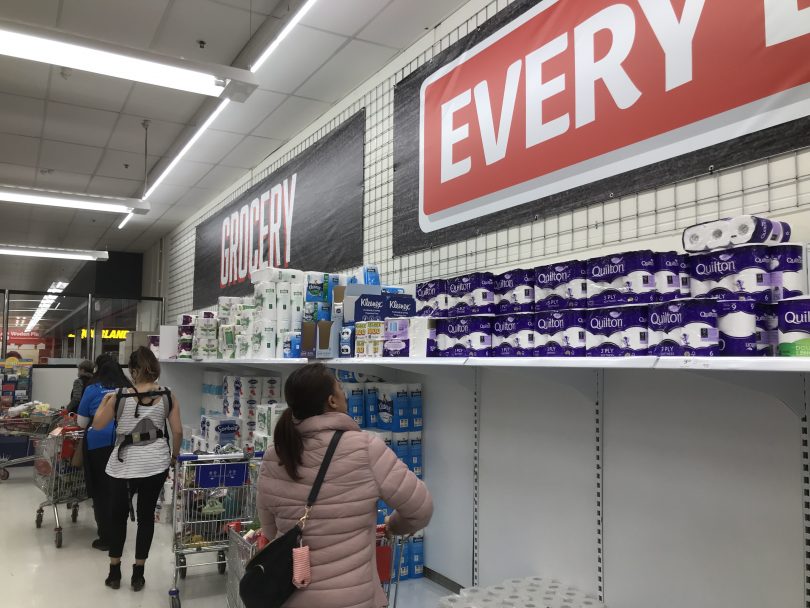 Canberrans rushed to the supermarkets despite being told that supermarkets will remain open throughout the lockdown. Photo: Lottie Twyford.

Canberrans have been urged not to panic buy in response to the seven-day lockdown which commenced at 5:00 pm this afternoon (12 August).

Despite this, images from various locations around Canberra have shown scenes of illegal parking as consumers rushed to their local shops, extensive queues inside and outside supermarkets, and supermarket shelves being stripped bare of bread, toilet paper and milk.

At Westfield Woden, a security and police presence was visible by mid-afternoon.

In both Woolworths and Coles supermarkets, the queues of shoppers snaked down and around almost every single aisle.

Those at the front of the line told Region Media they had already been waiting for upwards of half an hour.

Upon being questioned, shoppers reported only being in the supermarkets to purchase what they needed for the evening or their “normal groceries”. However, almost every second trolley or basket contained a packet of toilet paper and the toilet paper shelves in Coles at Woden were almost bare within hours of the lockdown announcement.

All shoppers seemed calm and only wanted to get to the front of the queue in a reasonable time.

READ ALSO Lockdown 2.0: Students urged to stay home for a week due to COVID lockdown

One woman said she needed to stock up as she was preparing to have her grandchildren at home and had originally gone in to purchase dinner supplies.

“I’m not overdoing it as I don’t want to make things worse, but the way everybody has come out like this is extremely concerning. This isn’t much fun for anybody,” she said. 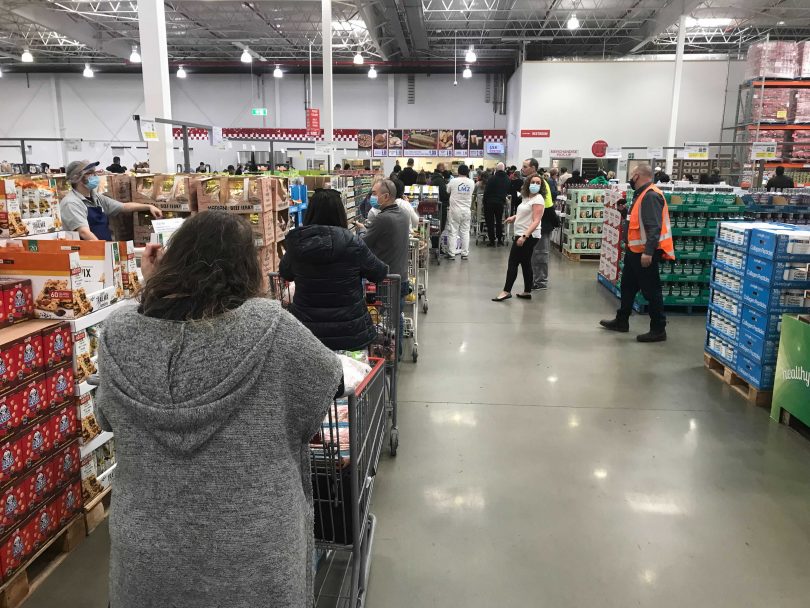 The queue at Costco around an hour after today’s news that the ACT would be going into lockdown. Photo: Thomas Lucraft.

She also reported being unsure about arrangements for children over the next week, but hoped the lockdown would not last any longer than that.

Upon being asked, most shoppers said they weren’t overly concerned about not being able to purchase food tomorrow.

READ MORE Lockdown 2.0: Students urged to stay home for a week due to COVID lockdown

Many shoppers were already wearing masks; however, many were not and social distancing was virtually impossible in the busy supermarkets. 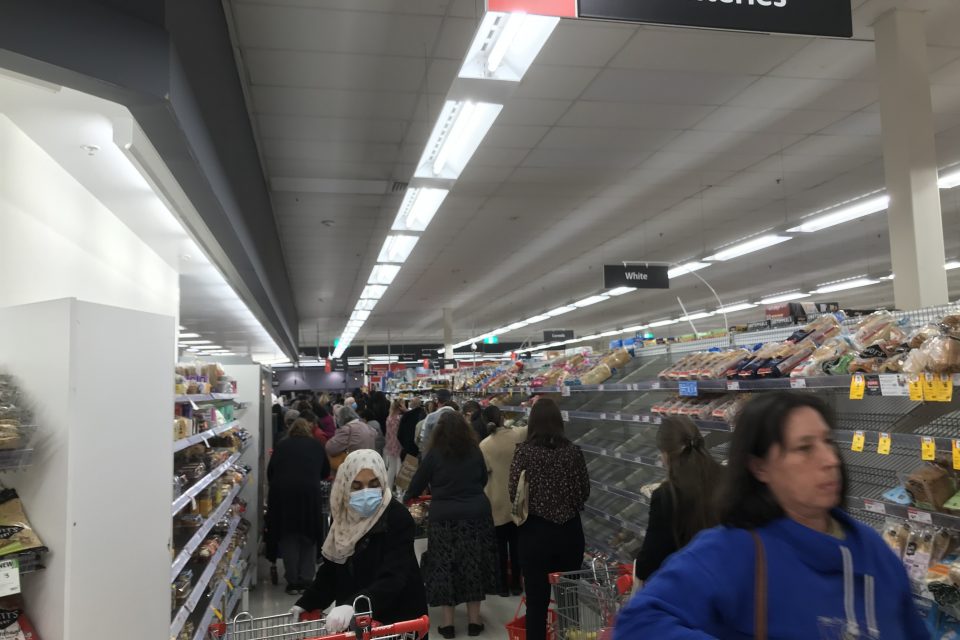 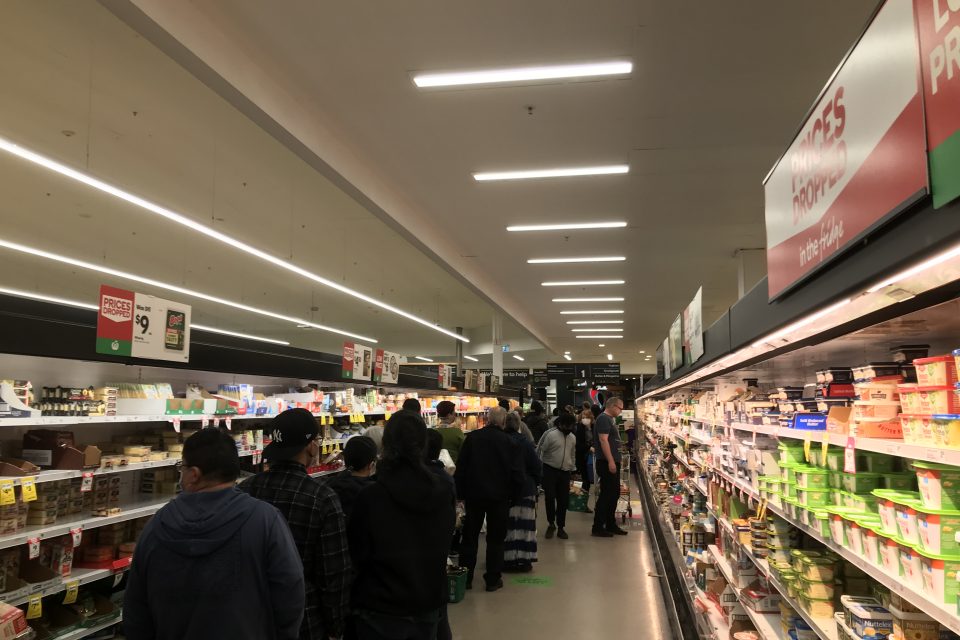 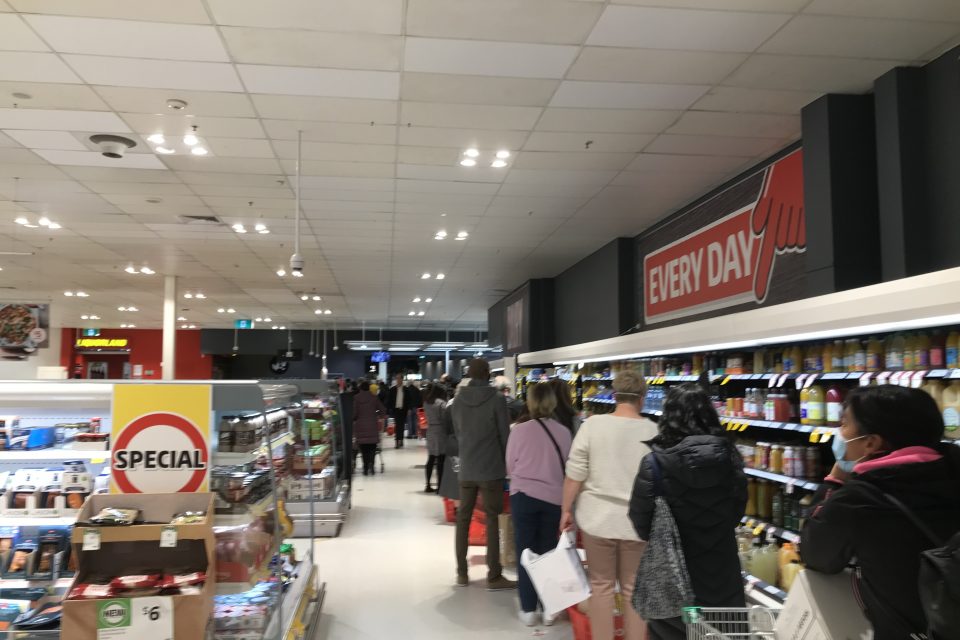 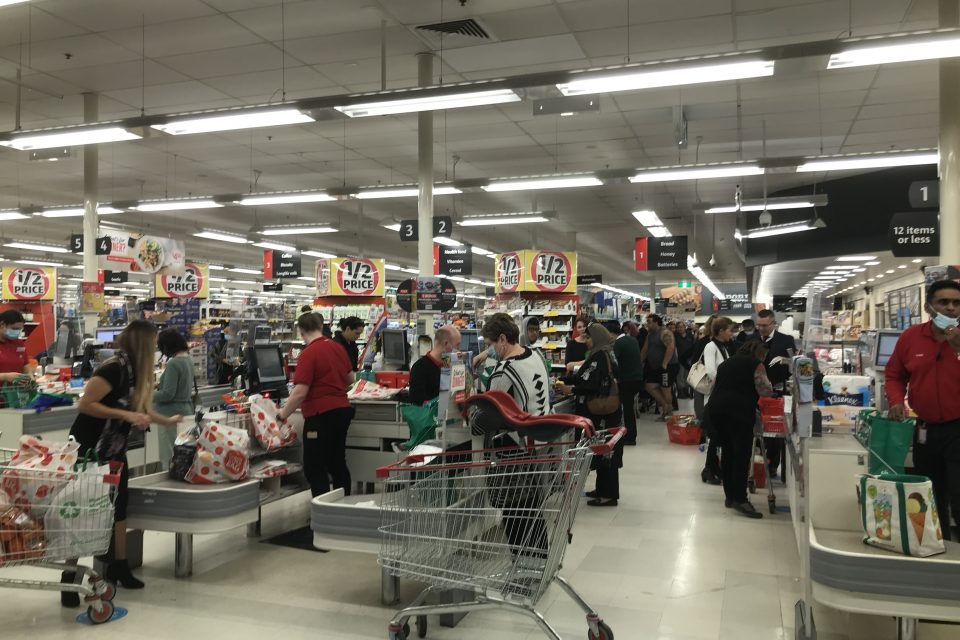 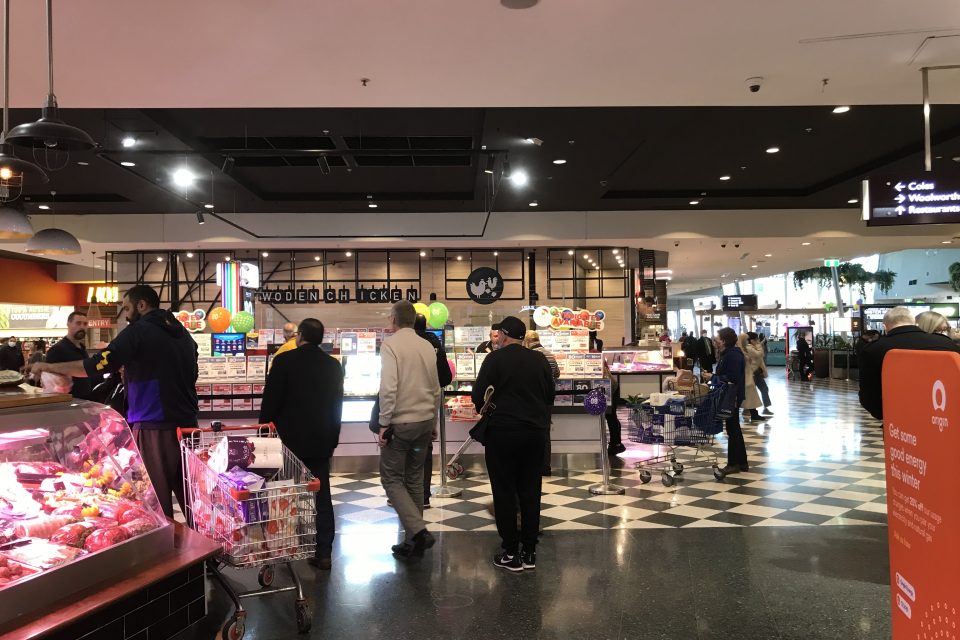 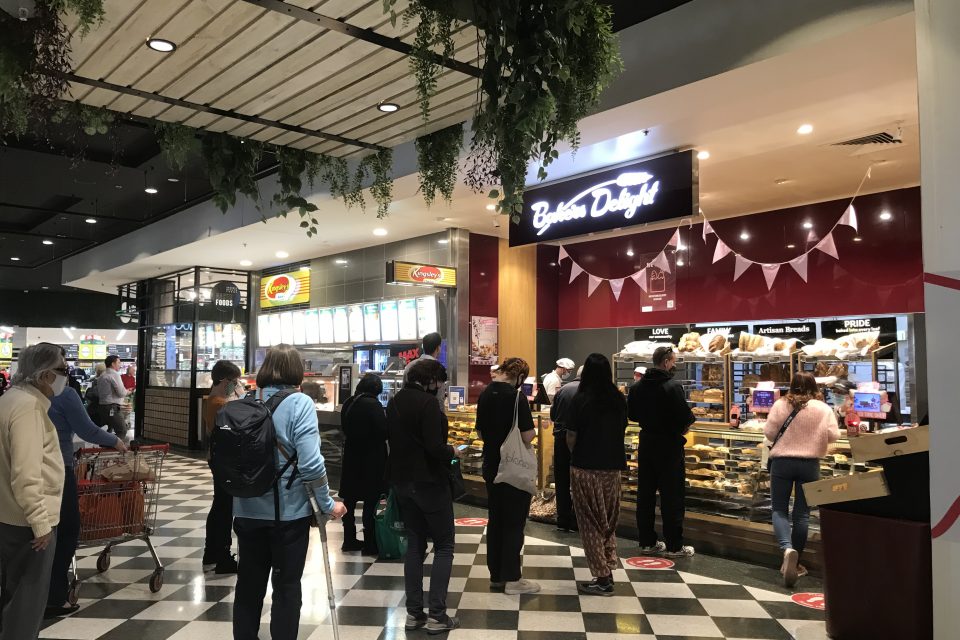 Similar scenes have been reported on social media at supermarkets at Dickson, Erindale and Wanniassa, Curtin and the Canberra Centre, and Costco at Majura Park.

Farrah’s Liquor Collective owner Matt Farrah said things had gone absolutely crazy ever since the news came out this morning.

“As soon as people knew, things have been out of control with both online and in-store orders,” he said.

At this point, Matt said customers were calm, and everybody had smiles on their faces despite knowing they were about to go into lockdown.

Liquor stores are remaining open throughout the lockdown, including Farrah’s, and deliveries would continue.

In response to the panic, Woolworths Australia has introduced limits on toilet paper in the ACT.

Individual customers can now purchase a maximum of two packs per customer, per shop, in line with current interstate restrictions.

The company issued a statement in which they pleaded with customers only to buy what they needed.

Coles has not yet updated their advice on product restrictions.

ACT Health Minister Rachel Stephen-Smith has urged Canberrans to remember that supermarkets and other essential services will remain open during the lockdown.

“Like every other jurisdiction has had to do, we need to remind you that supermarkets will remain open. Grocery shopping will continue to be allowed during the lockdown. There is no need for panic buying, and our key message to people is to please be patient, be kind with one another, and be thoughtful.”

But what is the science behind this pact like mentality?
Why do people turn from grasshoppers to locust? It’s very interesting as a human condition

Hi Timmy, I think it has to do with scared people who need to exercise some control of the situation. Evolutionary imperative to survive in a challenging environment.

Bizi Kat oh absolutely that. What’s interesting is the same goods around the world are being targeted. Copious amounts of toilet
Paper to me doesn’t make sense because statically you’ll end up at the shop within 5 days if you life in an urban environment. But I guess people ‘panic’ don’t think straight and just follow what others have purchased. Thanks for the response though as it’s much better than the usual troll’s opinion. Stay safe and have a great day

Activity at our local supermarket had subsided appreciably by mid afternoon yesterday (when I returned to pick up scripts from the nearby pharmacy) ; noticed that while bread and milk were scarce, there were er, piles of toilet paper available, as was the case for almost all of last year’s ‘lockdown’.

‘Panic buying’ makes for good headlines though, as did the national capital conveniently waking to a gloomy, foggy first day of lockdown – which we all know didn’t take too long at all to lift to a gorgeous day. Hope you all got your washing on the line!

ACT number plates seen as far south as Cooma panic buying. Canberra – you can officially get off your high horse!

Too many people out yesterday, went to Woolworths this morning no crowds shelves all full, panic buying is just that and not COVID safe 🤦‍♀️

LOL, Heavs – you definitely have a valid point there

Yep every time there’s a lock down everyone get the pooop so they do emergency run’s to the shop. Something telling me the bottom end is more important than the higher end. Very puzzling???

What’s with the big paper. Don’t understand, the supermarkets will remain open!

Seriously what is wrong with people. Can’t believe I’m living in Australia anymore. Country is stuffed

I waited 20+ minutes at Woolworth kippax to pay for 1kilo of meat.
……i want to kick myself because since monday i kept saying “I’ll do it tomorrow”.
I’m hoping the line wont be like that next week.

Numerous superspreading events across the ACT and Queanbeyan today! Thank you very much!

I got mine yesterday. Must have had a premonition.

It seems everyone went crazy at lunch time as soon as the lockdown was announced. I went to Coles Gungahlin around 3.30, got a car spot easily, found everything I needed (shelves were emptier than usual and not a great choice of brands) and through the checkout quickly and easily. There were even a few lonely packs of toilet paper on the shelves.

Avril Pounds That’s because by 3
30 everyone was at the covid testing centres.

Donna Cooke-Bain or on the road to the coast 😂

I cannot get this toilet paper rush. Why don’t people already have spare rolls. Do these people normally live roll to roll?

Can we use the contact tracing app to check who was at the supermarkets? And then get them to quarantine for 14 days. Because if you want a local superspreader event …

Jason Ezra I’m part of the problem for sure

Well, the Chief Minister did, in the presser, tell people to go to the shops before the lockdown and get what they need so they can minimise movement on the weekedn. Seems counter-intuitive.

It’s ridiculous behaviour! Just need to go at your normal time, the supplies will be there. And what about flocking to a crowd without distancing or masks!!! It’s not okay just because they got in before the 5pm close!

I refuse to act, as these do, without dignity.

All of Canberra 5mins after lockdown announcement

Haha, sheeple!
All grocery stores to remain open, but still flocks of sheeple herding out for toilet rolls.

“sheeple”
Ha, ha, guess who is too influenced by groups in America.