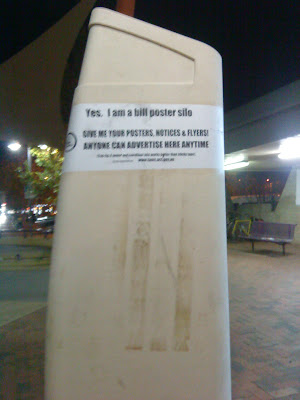 A crazy thing to do I know…….Woolworths Dickson early on a Monday night…..walking along ipod in ears and almost smacked bang into this giant monolith, well largish white column thingy.

2001 A Space Odyssey came to my mind, yeah yeah it’s white not black, and there are no monkeys banging old bones around it (probably too early in the evening for that sort of thing). Anyway, nice idea I reckon, love the handy hint on what paste to use, thanks TAMS. 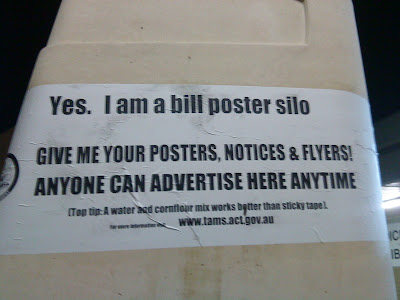 Extorsion: To no longer be flexible, to cease movement under stress, to fail under stress…AHA!!! I knew it, he’s referring to the Government!!!!!

Extorsion: To no longer be flexible, to cease movement under stress, to fail under stress…AHA!!! I knew it, he’s referring to the Government!!!!!

You lost me about here.

+1 – I keep checking back to see if someone has been able to clarify the majority of that post.

You lost me about here.

I’m sure they will end up just putting some crappy metal mural/sculpture on it in the long run, just like the big ones in Garema place.
They seem a little small too..

So where is the $500, $1000, and $5000 notices of infringements under the election law for criminal syndicates that defrauded the State and Commonwealth by 1] littering the country side, with 2] un-authorised election messages that are afixed in places that make it a danger to the public?

Thats right, I must of needed a Government to invent its own pay rise by awarding its self these places after they ripped me off by allowing their mates to trash the country while not paying work-cover, or having any compliance with RTA regulations to advertise illegaly within public carrage ways!

Like it matters after being bashed by drunks, same old one way no questions asked BS

Anyone? How about an interactive poster of Drunks who protest at everything but the amount grog lobby groups can give during elections?

Yeah right – Anyone – sure, isnt that wat they said about the net before criminals in Government went about charging people who have evidence of Government criminal neglect, conduct, extorsion, death threats – does anyone wana make a bet on that propaganda statement that “anyone” can post?

Yeah I thought the same Facet (I always believed he didn’t do it), but it’s a shame he has to live in a silo.

I heard they cost up to $15,000 and the one atHawker has been placed smack bang inthe middle of the area they’re going to build on after they’ve ignored the consultation of locals, again

i saw this, and thought it was a rather plain sculpture. Thankgod they put a note up there telling us what it’s for.

Thanks facet, a good laugh.

Good to see that Bill Posters is alright and going OK after the threat of prosecution.

One at Kippax also.

There’s one at Charny shops too, but they put it in a location that I don’t think is going to get a lot of foot traffic passed it.

aha! That answers my question as to what the hell that thing is at Hawker.

Yeah, there’s one of these at Hawker shops. I figured it was to put posters and flyers on, but I don’t think there was a friendly notice from TAMS or anything on it.

Bill Poster Silo…yeah right, no doubt it’s full of state of the art audio and video technology and will be used to collect intel on us plebs.

Soon, these things will start popping up everywhere, even in our kitchens and dare I say it, bedrooms!

Don’t trust them, rise up now and make sure your tin foil hat is firmly in place and remember, Soylent Green is people!

I saw the one opposite O’Neils yesterday and wondered what the hell it was. I though ‘notice board’ as the most likely and I guess I was pretty much right.

Good idea, I suppose. Does anyone know if these things are popping up in other urban centres, or is it just a Dickson initiative?