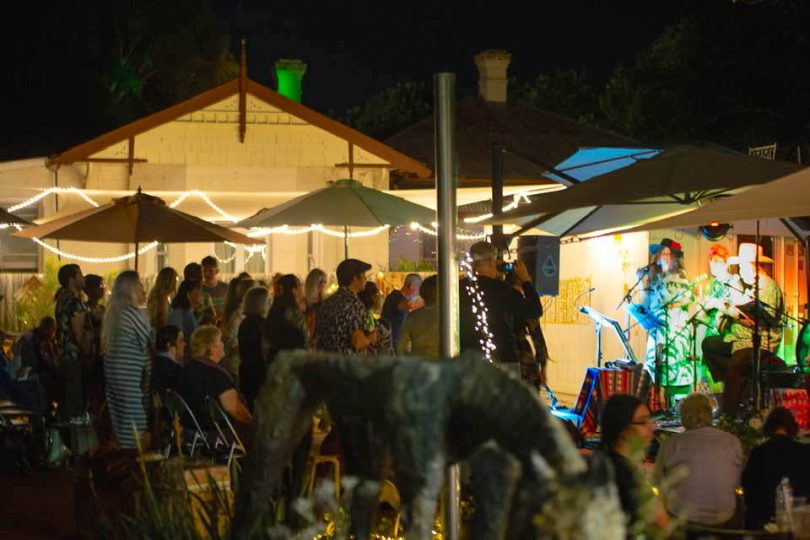 Pachamama playing its Latin music to an appreciative crowd at The Queanbeyan Hive on 19 February. Photo: David Burke.

It’s a Friday night in February at The Queanbeyan Hive and the sound of Latin music is creating a taste of the culture to come in a city that appears very keen to break its long-held reputation as ‘Quangers’.

Down the road, you will still hear the familiar strains of Run to Paradise in the nearby pubs, but there is a steadily growing groundswell of artists creating the brushstrokes of an arts and culture scene bringing Queanbeyan into line with its big city cousin, Canberra, and nearby towns such as Braidwood.

The Queanbeyan Hive has long been giving a voice to the local arts and culture scene, but the city is now catching on.

Queanbeyan will also come to the rescue of this year’s National Folk Festival by hosting a scaled-back, COVID-19-safe event called Good Folk during two days of the Easter long weekend. Queanbeyan’s favourite son, Omar Musa, will perform exclusively for the festival.

Meanwhile, the town is also painting itself as an arts hub with a dash of cafe culture.

Cafes are beginning to thrive again, and while people may scoff at the thought of associating Queanbeyan with arts and culture, they can now do it while scoffing a quinoa and avocado salad while sipping an almond latte. 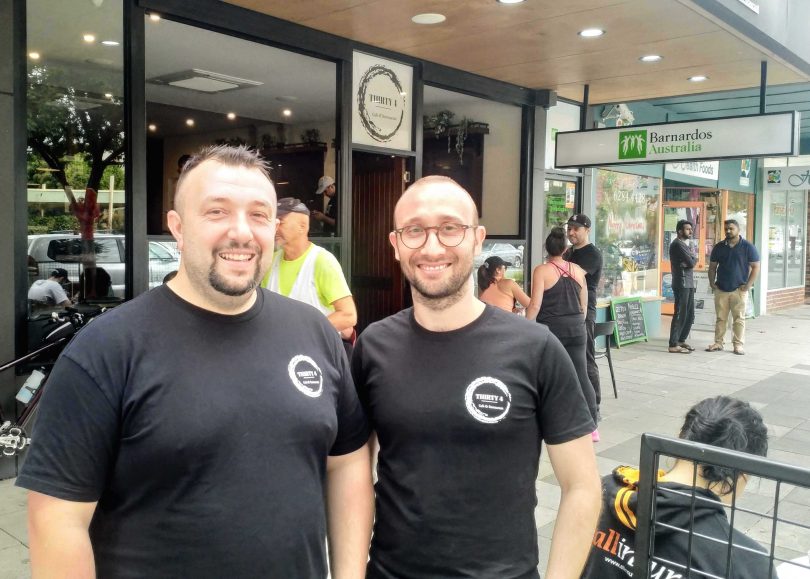 A construction tender for the $74 million Queanbeyan Civic and Cultural Precinct will soon have the first sod turned on a project described by Queanbeyan-Palerang Regional Council as “an essential component of the exciting Queanbeyan CBD transformation, and part of the catalyst for the future shape of the town”.

Upgrades to Bicentennial Hall are taking shape, while a new artistic director at The Q has a full card of events for at least the next six months.

The 2021 QPRC Art Awards has had a significant increase in prize money, with $12,000 to be offered in prizes thanks to sponsorship from Bendigo Bank.

Meanwhile, the refurbished Rusten House – a former hospital and one of Queanbeyan’s oldest buildings – will soon open as an exhibition space which is already booked from May until December 2021.

Queanbeyan-Palerang Regional Council’s newly appointed culture and arts officer, Janita Byrne, is a former educator at the National Gallery of Australia and she says there are lots more hidden gems of art and culture in the town.

“I’m blissfully discovering the history of Queanbeyan in the backstreets,” she says, admitting to previously only having a passing association with the city.

“People who pass through generally only see the main street so gems such as Rusten House will definitely become a tourist destination when it opens.”

The project to refurbish Rusten House, which was built in 1861, is the culmination of a six-year project that has seen asbestos removed and a new roof installed.

Janita says the transformation keeps the building’s original heritage and will provide a regular space for art exhibitions, as well as a space for community groups.

“We are at the pointy end of a very large project that will reactivate Rusten House, which will be known as the Rusten House Arts Centre and will open in mid-April,” she says.

The refurbished Rusten House will soon open as an arts and community centre in Queanbeyan. Photo: Supplied.

The increased offerings of theatre and arts events in Queanbeyan are sorely needed, according to the owner of The Queanbeyan Hive, Helen Ferguson, who has been hosting live music events once a month, along with regular art exhibitions from local artists.

She regularly fields requests from local musicians and artists, but feels more could be done to help promote the burgeoning arts and culture scene in Queanbeyan.

“We’ve only just started back with regular events in the past month or so,” says Helen. “We’ve got our cafe here now, and we really just want to bring more people together.

“Queanbeyan has always been this kind of outsider to Canberra, and The Hive is one place where people can bring fresh and creative ideas. There are lots of little places like that here, but we need to all connect.”

Benji Philip Rush - 11 minutes ago
Trish Roberts doubt it could go very fast with 3 people on it but View
Jorge Gatica - 15 minutes ago
Chris Zigon thanks, could you also tell us how much diesel the scooter providers burn on a daily basis servicing, replacing b... View
Patrick Keogh - 19 minutes ago
... where our renewable energy generators feed it in and we take it out! View
News 22

Capital Retro - 36 minutes ago
I didn't say they were money makers - they are in fact money losers. View
chewy14 - 5 hours ago
Capital Retro, You're partially correct but not in the way you think. The SA battery has been so successful simply because th... View
David Wagner - 5 hours ago
I like it, but why not look at biogas using sewage plants eg. Europe or Stirling engines or ........ View
Food & Wine 14

Scott Stevenson - 1 hour ago
Best Bacon and Egg Sandwich *EVER*! And the rest of their menu is not too bad, either..!! :)... View
FB - 3 hours ago
Canberra is certainly an odd place. Where else could you start a business getting people to pay $10 for a toasted sandwich. I... View
Ivana Ryan - 4 hours ago
Toasted sandwich and a coffee 😋 Bojana Simic View
News 3

Alison Brittliff - 2 hours ago
Should be the same as football games View
Jenni Zimoch - 3 hours ago
Taylor Rundell we haven't even had any cases a part from one or 2 in hotel quarantine in MONTHS too. And I'm not sure we ever... View
Taylor Rundell - 15 hours ago
In New Zealand they removed these types of restrictions once they were at covid zero, and other states are more relaxed - why... View
Property 1

Ol L - 3 hours ago
But apparently according to Mr Barr there is no link between increasing landlords costs via land tax and any rise in rents? I... View
Lifestyle 27

Geoff N Narelle - 4 hours ago
I think that the author of the article has romanticised the story somewhat. It was probably a 20 minute bike ride each way on... View
Food & Wine 3

Acton - 6 hours ago
Stupid. They slip off accidently.... View
Property 5

HiddenDragon - 19 hours ago
Why stop with repatriation flights? The logical conclusion to the economies of scale argument (which is equally relevant to j... View
show more show less
*Results are based on activity within last 7 days

The company behind a proposal to construct and develop a new hard rock quarry near Royalla has made its intentions...

There are 2789 Canberrans on the ACT waiting list for public housing and former Barnardo's mother of the year and...
Opinion 37

At 68, Mogo mirror twins Peter and David Abel have negotiated all of life's twists and turns as a united...
News 22

Neuron Mobility has announced their fleet of orange e-scooters have clocked up 1 million kilometres since their introduction in Canberra...
Opinion 60

@The_RiotACT @The_RiotACT
Messages from history and of our hopes for the future have been placed in a time capsule in the restored roof of Canberra's Shine Dome https://t.co/YgWNidOIwH (28 minutes ago)

@The_RiotACT @The_RiotACT
Previous land releases at South Jerrabomberra have almost sold out and there is big interest in the next land release of 30 blocks on Saturday, 1 May https://t.co/KstCzSsFt9 (2 hours ago)

@The_RiotACT @The_RiotACT
Funding issues from the developer of Queanbeyan's long-awaited cinema are delaying the project more than three years after its DA was first approved https://t.co/41vCKCl5hx (3 hours ago)