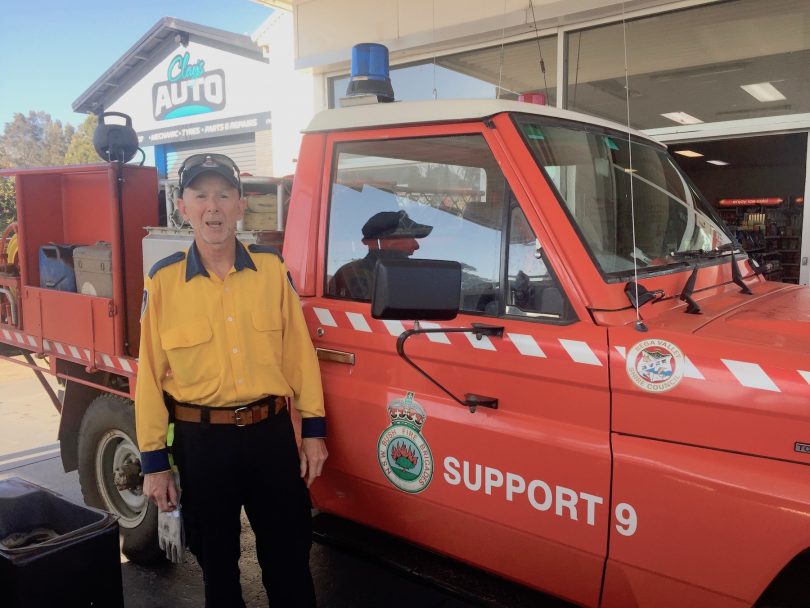 The sense of solidarity started this morning at a Bermagui service station: “I’m in the Bermi rural brigade, in the strike team. I’m in this truck from Bega Control Centre heading to Cobargo for a 9:30 am briefing. Then we take the trucks up to the fire and go at it; leave the trucks there for the next crew.”

So says Lewis Gaha, joining the many rural firies heading to Batemans Bay to help fight bushfires raging out of control north of the town. 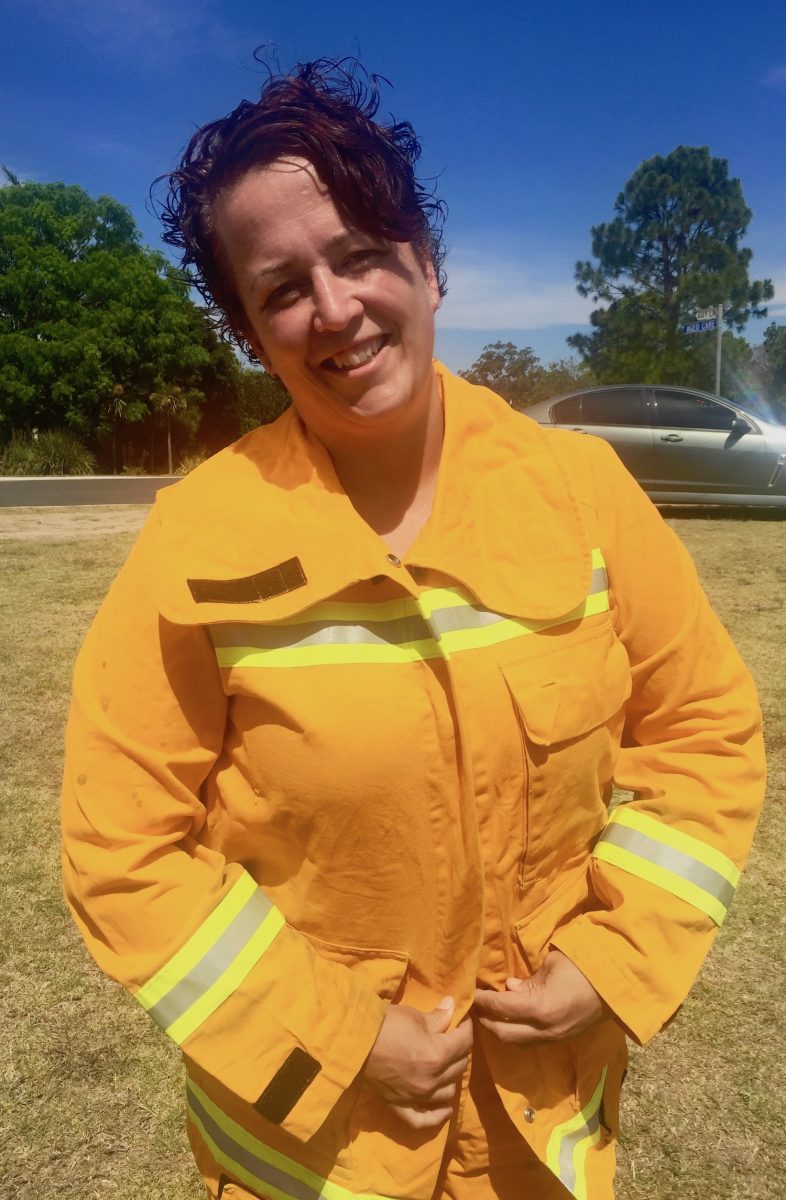 In Batemans Bay, dozens of gold-uniformed firies jump from a coach and head to the fire station.

Kelly Fraser from Benalla in Victoria is one of them.

She’s been fighting fires for the last five years, before that she “did similar stuff in the Navy … and I’m also a registered nurse”.

Kelly came off the coach with others from Victoria, firies bussed to the Bay to help back up tired crews that have been fighting the Currowan Fire for days.

Fire trucks from Wodonga, Tarrawingee, Indigo Valley and many other towns are lined up waiting for fresh crews.

The new recruits head to their allocated vehicles, fill in their forms and hand them to the station co-ordinator, as one by one the trucks pull-in to be given a once-over by the service team. Then they all head off into the fray.

Many residents evacuated from fire-ringed areas north of Batemans Bay are camped out at the Mackay Park Sports and Function Centre in the centre of town. People have set up temporary homes, are heading off to work as usual or enjoying food and music, showers and camaraderie in the centre. There is an undercurrent of worry, but spirits are hopeful. 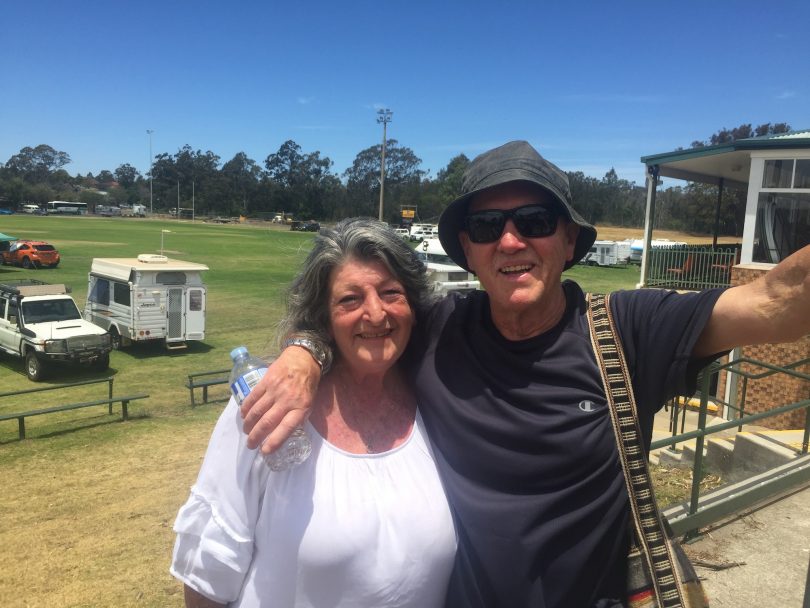 Kim Stait and Gig Ledmore have been out of their homes for three days.

People like Kim Stait and Gary ‘Gig’ Ledmore, who are neighbours in the Batemans Bay North Tourist Park. “Our park manager was amazing,” says Kim. “He wouldn’t leave until we were all out safely.”

Like many others, Kim and Gig have been allocated beds for three nights in local Batemans Bay accommodation. After that, they’ll head back to the Mackay Park Sports and Function Centre for a voucher for a further two nights.

“I’ve got a tip for you, too. Take your seafood out of the freezer and bring it with you,” laughs fisherman Gig, who says the power is off at his home. “I really tried hard to find all my insurance papers, important papers. But if the freezer’s off for a few days …” 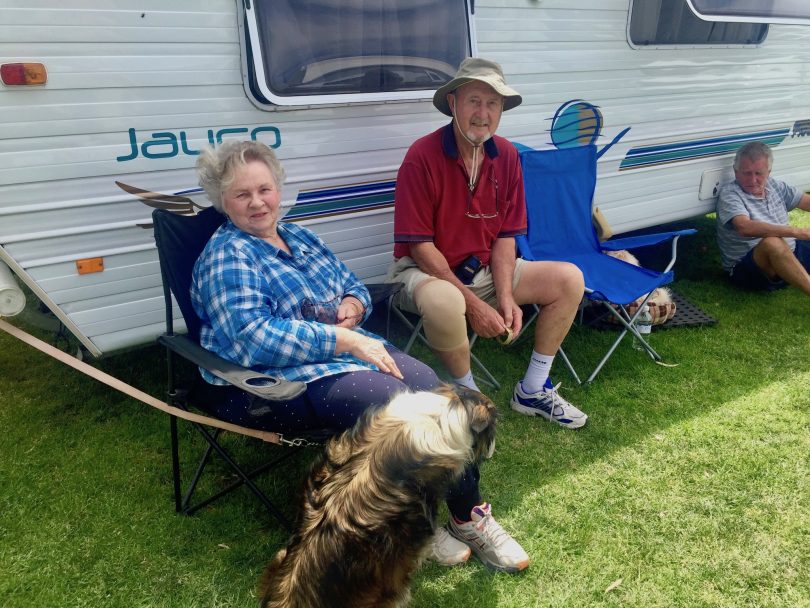 Sandra and Trevor Graeber were encouraged to leave South Durras on Monday.

Sandra and Trevor Graeber live at South Durras and are now set up here at Mackay Park.

“We were encouraged to leave our home near the Murramarang Resort on Monday. We’re originally from Albury, and I know there are fire teams from Albury here helping out.”

Fiona Phillips, local MP for Gilmore, chats with those camped at the Mackay Park grounds.

“I was at Ulladulla yesterday. We drove right around the back way, it took two-and-a-half hours.” Phillips says she came down to show moral support.

“We’ve been up at the fire station to see Captain Ian Aitken. The community spirit has been amazing. Everywhere we go we see people come together,” she says.

“I grew up in Jervis Bay, and I think of my entire electorate as home. Parliament is on today, but I wanted to come home.”

Many of those evacuated are sitting chatting outside their caravans. The consensus is that “the reception and the people here are wonderful”. The park is awash with vans, boats and dogs, people with cat cages, birds, people having showers, showing off their emergency kits, keeping their spirits up.

“This town is so great! We have more food than we can handle. There was a lovely coffee van here yesterday and the local bakehouse brought us hot muffins.” 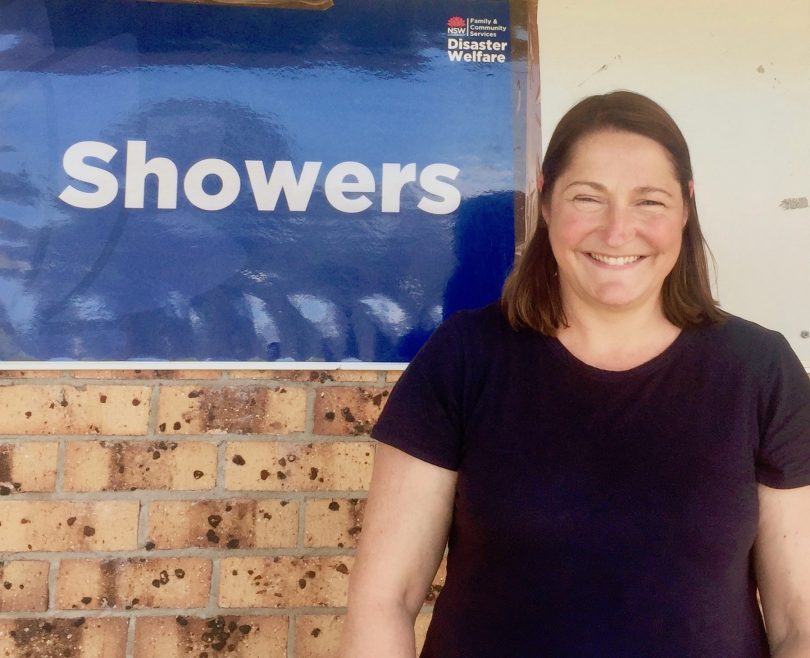 Many of those housed at Mackay Park are dealing with multiple pets and other animals. Emily and Joanne Classid have left their Longbeach home with four cats and a dog. They’re heading to accommodation in Batehaven. Joanne is devastated: “We’ve worked really hard to get our home. We only bought it in October, and it’s been a real journey. It’s terrible not to know what’s happened.”

Sarah Burke of Mogo Dog Kennels says “people unable to place pets can call me, I can talk about their individual situation. We’re doing the best we can but we’re filling up”.

Meanwhile, some kind-hearted ladies have been spotted driving around delivering horse feed to those with equine pets.

“They’ve been to Moruya showground and the local Pony Club grounds. They gave us four bags of pellets. Now they’re off to the Batemans Bay evacuation centre,” says a very happy horse owner on Facebook. 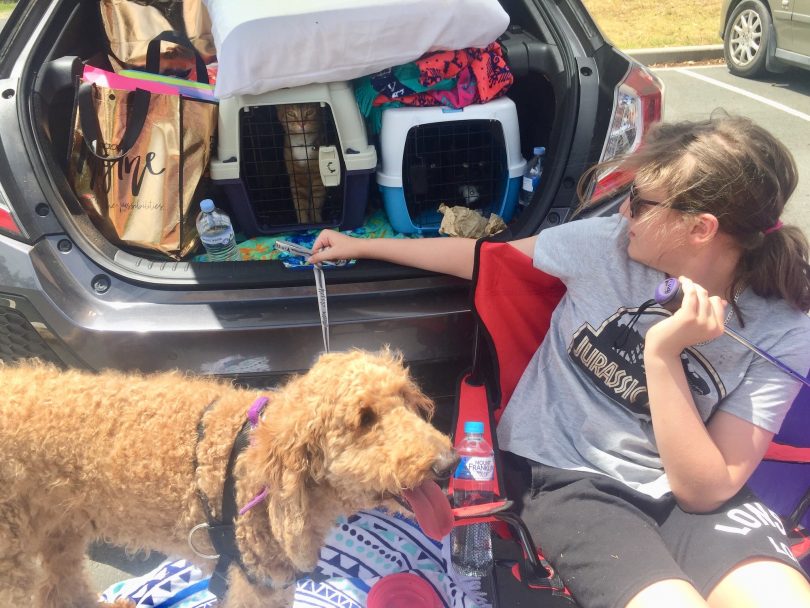 Leaving their precious home, but with their four cats and a dog.

The Mariners On The Waterfront Hotel at Batemans Bay has offered over 20 rooms to evacuees, and people can keep their pets with them. “It’s not normal practice,” says Ann Mikelat at Mariners’ reception, “and we’re offering a free breakfast also. It’s what you do”.

While I’m at the Bay evacuation centre, word comes that the Nelligen Fire has flared up again at River Road, and Nelligen is being evacuated. The map of coastal NSW on the Fires Near Me app is blanketed in blue diamonds indicating Advice level, and there are many red ones popping up again indicating Emergency Warning. 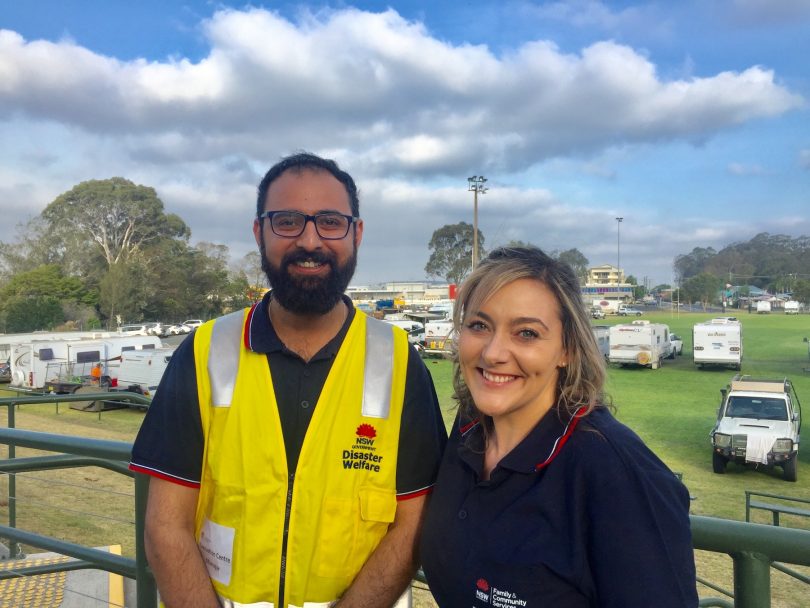 Twenty minutes later the wind has swung around yet again, and appeared to be blowing from the East.

“If it turns to the east, that’s great,” says George Hatzikiriakos at his Batemans Bay fish & chip shop, “then it will go back on itself!”

George’s wife Dora has a message for everyone: “The community’s been amazing, but many of the older generation, they’re not on the internet, they don’t have the technology. Some of our neighbours may not know what’s happening so we try and look after them.”

Check on your neighbours everyone – a great habit to encourage at all times. It’s certainly order of the day here in Batemans Bay.

Use Register.Find.Unite to register, finds and reunite with family, friends and loved ones after an emergency.

Dealing with the fifth season: bushfires in Australia