Did you know this girl?

Homicide Squad detectives investigating the discovery of skeletal remains at Belanglo State Forest last year have released an image depicting the deceased, believed to be a teenage girl or young woman.

The image is the result of a ‘facial approximation’ that was completed based on an extensive examination of the female’s skull.

A group of trail bike riders alerted police to the remains in dense bushland near Daly’s Waterhole in the Belanglo State Forest, south of Sydney, on Sunday 29 August 2010.

Forensic analysis revealed the remains belonged to a female, who has been nicknamed “Angel” by detectives investigating her case. They believe she was aged between 13 and 25 years at the time of her death. The bones could have been in the area between six months and 10 years.

Strike Force Hixson was formed to investigate the discovery but, despite extensive inquiries in NSW and across the country, detectives have not been able to identify her.

They recently engaged the skills of a facial anthropologist from the University of Western Australia in a bid to create a likeness of the female’s appearance and hope someone might recognise her.

“Through extensive checks with missing persons records, it appears no-one has ever reported this teenage girl or young woman missing, but someone must know who she is,” said Homicide Squad Commander, Detective Superintendent Michael Willing.

“That’s why we’ve engaged the services of a specialist who has completed a facial approximation, involving extensive examination of the female’s skull and computer graphic manipulation, to create a likeness of her appearance.

“Forensic analysis of the remains also indicates the female’s hair was of the length depicted in these images, however, the hairstyle itself could differ.

“We are now appealing to the wider community for any information that could help us to identify her.

“We’re hoping someone might remember her as being a friend or a neighbour, or even someone they recognise as having been a member of their local community.”

Det Supt Willing said detectives had made enquiries with dentists local to the Southern Highlands in the hope dental comparisons might help to identify the female, but had so far been unsuccessful.

“The female’s teeth show signs of dental work typical of Western dentistry and commonly carried out in Australia, but so far we’ve been unable to match them with dental records,” he said.

“If we receive information to point us in the direction of who she might be, we would be in a position to confirm her identity through dental records.”

Police are again releasing an artistic impression of a T-shirt which was located by officers near the skeletal remains. The T-shirt is short sleeved with a distinct motif featuring the word ‘Angelic’ in pink text, a rose and a heart with angel wings. This type of T-shirt is no longer available for sale however was available for sale in New South Wales and other parts of Australia from the early to mid 2000s.

They are asking anyone with information that could help them identify the teenage girl or young woman to contact Crime Stoppers on 1800 333 000.

Detectives will also launch a social media appeal in an attempt to identify the female, with information available on the police Facebook page, as well as on YouTube at http://www.youtube.com/watch?v=0Bf2z_aGLMk 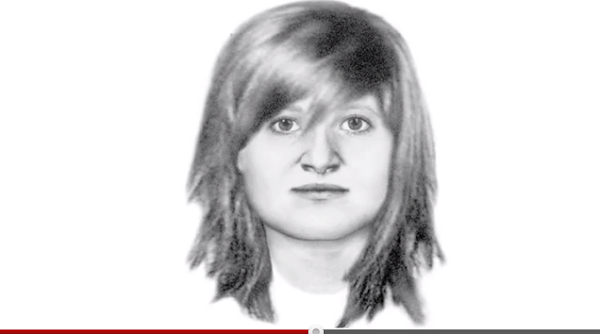 8 Responses to Did you know this girl?
Filter
Showing only Website comments

If it wasn’t for the 6 months to 10 years time range they put on it the remains I could have stated my guess that it was the 1979 disappeared 13 year old Sophie Woodall who was known to have been last seen in Victoria on her way to be with her girlfriend in Brisbane.

Sad that apparently no-one has even reported her missing.

It’s quite possible that she IS reported missing. Have you ever looked on the AFP missing persons website? I walked out of the lifts in the Canberra Hospital a few months ago to be confronted with an missing persons poster that had an ex roomie’s photo on it.
There are a LOT of women on that website. That they just disappear for sometimes VERY long periods is quite astounding .

Did you notice the range of ages that this woman could have been? The reconstruction of faces from statistical depth information is by no means a precise science. It’s not like this is guaranteed to be an exact likeness of someone’s face, so there are likely quite a few possibilities of who this person could be already and these leads will have doubtlessly been already explored.

Releasing a photo representation is a crowdsourcing strategy to leverage possibilities for a speedy identification. Identification holds leads to track killers.
Because of the statistically overwhelming likelihood of victims being killed by someone they know, (something like over 90 percent from memory…) confirmed here :http://www.aic.gov.au/en/statistics/homicide/victim-offender.aspx

So chances are that the person who knows who she is (because they killed her), is in a good position to supply an excuse about her disappearance (“She’s gone off to live in France with her mother”) and will not report her as missing. The best hope is to see if anyone who is a casual aquaintance can identify her and bypass any attempts to logically explain her disappearance.

So there’s some explanations for her identification issues.
I have no doubt that there’s someone sweating about this somewhere. I hope they can feel the noose tightening, unless of course they’re already in jail for similar offences…

Sad that apparently no-one has even reported her missing.

From the OP…“Forensic analysis of the remains also indicates the female’s hair was of the length depicted in these images, however, the hairstyle itself could differ.”

Thanks, admittedly I only looked at the headline and the pic.

If I’m not mistaken there are three distinct parts of the human body that doesn’t decompose.

Bone (including teeth), nail, and hair.

From the OP…“Forensic analysis of the remains also indicates the female’s hair was of the length depicted in these images, however, the hairstyle itself could differ.”

Actually, that is a damn good question. How do they prove that the woman had a distinctive Jennifer Aniston flip??

Michael Jayfox - 29 minutes ago
Mat Barber please explain how you think that new parking ramps will stop it from being an eyesore View
Tristan Wellens - 57 minutes ago
Will only rent for about $500 a week per smaller unit 👌🏻 View
Glenn Beaumaris - 1 hour ago
Commercial and retail spaces. What about the ones in the A&A development which are still empty??... View
Breaking 24

Heather Whittle - 1 hour ago
Lucas Anasdow maybe if the money that was thrown at this vaccine was given to other causes too they could be faster. Hard to... View
Alison Brittliff - 2 hours ago
Lucas Anasdow it’s about who we need to protect first, front line staff, then the most vulnerable , the plan isn’t about... View
Rodney TatStan - 3 hours ago
I'd prefer mederna after the results from Pfizer anecdotally by my family getting it in USA not being that great. Variety is... View
Food & Wine 4

Josh van Limbeek - 4 hours ago
What a great article! My Mum is a Red Hatter and she has so much fun too ❤❤ View
Jo Jo Joey - 4 hours ago
Barbara Bennett, I love how much enjoyment your ‘red hatters’ gives you’ 🎈💜❤️💜 View
Property 27

Mookie Moo - 4 hours ago
Assuming this means 80% by Oct within the adult population only? Because roughly 20% of the population would still be kids, w... View
Community 35

@The_RiotACT @The_RiotACT
Michelle Heyman's stunning return to football began with a simple question on Instagram: “Hands up if I should make a comeback to the W-League?" https://t.co/UNn8rDWuj3 (3 hours ago)

@The_RiotACT @The_RiotACT
The 2021 Australian of the Year is Grace Tame. Grace is an outspoken advocate for survivors of sexual assault, particularly those abused in institutional settings https://t.co/Q6nMb1PGRL (3 hours ago)

@The_RiotACT @The_RiotACT
Times have been ruff, so @QTCanberra has rolled out the pet-friendly red carpet & opened its doors to allow furry best friends in their luxury hotel rooms https://t.co/V89hSF18w9 (4 hours ago)