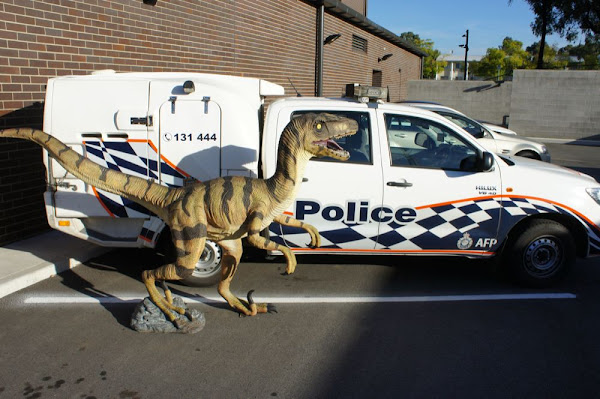 A tip-off to ACT Policing has led to the recovery this afternoon (Monday, March 25) of the dinosaur statue which was removed from the National Dinosaur Museum in Gold Creek late last week.

Acting on information received, General Duties officers attended a residential address in Page where the 1.6-metre fibreglass Utahraptor was located in the rear sunroom of the home. The statue’s tail had been removed but was otherwise undamaged.

Officers from the Exhibit Management Centre were called to convey the statue to Belconnen Police Station, where the museum owners are planning to pick it up and return it to its original location.

A 20-year-old man from Page admitted to removing the statue as a birthday prank, and is assisting police with their enquiries.

Sergeant Marcus Boorman, from Belconnen Patrol, said that the man appeared contrite and apologetic for his actions, and had been planning to return the item this evening.

Yes but the spelling nazi in me wouldn’t allow it however well spotted nonetheless.

Going to the food court to dine on fat bogan kids at McDonalds….

I saw it at the Mall yesterday, I wondered if it was the same one

Well this guy is much, much, much more useful than some of the other dinosaurs ACT Policing has roaming it’s corridors…..

Suck it up Sydney and Melbourne. You will never be this awesome.

Looks better than the Owl

Hear hear! They should replace the owl…it’s better a dinosaur than an eyesore.

Get rid of the tasers, one appearance of Constable Utah will be enough to scare any miscreant into submission.

That ain’t no Utahraptor! That’s a Mullysaurus!

Glad its found safe. Photo does look like it stepped in poop in the carpark though lol …. *Raptor goes “Gahhhh!” and skids foot on concrete to scrape it off*

+1!
So, the Canberra confidential story was accurate, as usual….!

The dinosaur managed to park within the lines. Is this a first for the riveting RiotACT parking stories?

I saw it in the back of the Dinosaur Museum ute this afternoon, presumably on it’s way back home.

Suck it up Sydney and Melbourne. You will never be this awesome.

Jake Winters - 6 hours ago
Ana Martinez enjoy mother x View
Nicole Thomson - 11 hours ago
Becky Cormack if it’s In a format for a random person to engage with (which it Isn’t) Plus schools are indicating it will... View
Natalee Gersbach - 12 hours ago
If only we had NBN, working from home and kids schooling from home might not be such a huge issue. Almost our entire suburb h... View
Food & Wine 3

OldMan Wyatt - 10 hours ago
I have always preferred chocolate rather than seafood at Easter View
FishCo Fish Market - 12 hours ago
Thank you for your lovely feedback. Anna truly loves what she does and this will mean a lot to her. :)... View
Michelle Littlewood - 15 hours ago
FishCo Fish Market Thank you for your fantastic service and exceptional seafood. Anna was wonderful when placing my order, an... View
News 32

Sair Rah - 14 hours ago
Nobody has asked me what set up we have in place with two primary school kids at home. My original email requesting a loan de... View
News 5