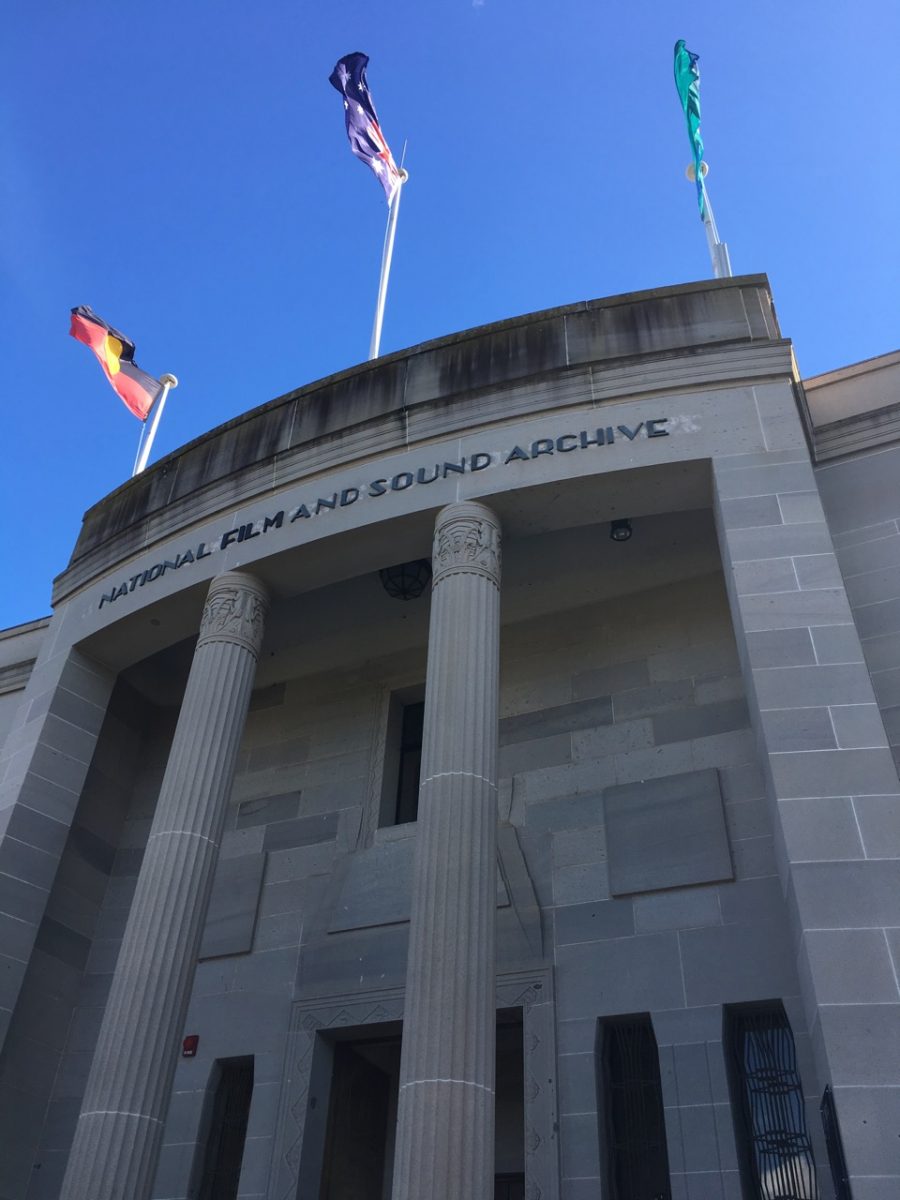 Art deco features in the foyer of the National Film and Sound Archive in McCoy Circuit, Acton, highlight the building’s original purpose as a place of anatomical research and as the entrance to a proposed zoo.

Opened in 1931, the building housed the Australian Institute of Anatomy and was designed specifically to facilitate dissections and detailed research on animal and human body parts. It also housed the extensive collection of about 2000 specimens donated to the Australian government by Sir Colin MacKenzie, an orthopaedic surgeon and pioneer of orthopaedic surgery in the early 20th century.

MacKenzie was a passionate researcher, investigating the link between the anatomy of Australian native animals and human anatomy, health and disease. He started collecting native animals because he was also concerned they would become extinct. A man of significant means, he contributed financially to the purpose-built institute which even had a ‘platypus island’ with 400 specimens, in the middle of one of the galleries.

The institute with its diverse and bizarre exhibits was a popular attraction in its early days.

The collection contained specimens including skeletons, skulls, limbs, organs, platypus in various forms from egg to adult, dissected koalas, aborted foetuses, a young kangaroo from a pouch, the carcass of a thylacine, a soldier’s foot in formaldehyde and the heart of Australia’s most famous racehorse, Pharlap.

MacKenzie was particularly interested in the platypus and believed the monotreme was the link to all mammals, birds and reptiles. He was also intrigued by koala movement and carefully dissected their arms to determine how they grasped overhead branches.

After veterans came back from World War I, he used his research to treat shrapnel shoulder injuries and rehabilitate wounded soldiers. He created prostheses for amputees and shoulder splints, and worked to re-educate the wasted muscles of infantile paralysis (polio) sufferers. He was knighted for his work in 1929.

Visitors to the National Film and Sound Archive building are surrounded by MacKenzie’s strong connection between animals and humans. Stylised Indigenous bark-painting designs can be seen beneath the external windows along with the geometric black marble floor inspired by Aboriginal art.

Goannas, ferns and waratahs are etched into the entrance columns, while open-mouthed frilled-necked lizards greet visitors at the entrance door. Highlighted within the wall surfaces and courtyard are plaster castings of koalas, kookaburras, platypus, tree kangaroos and wombats.

After MacKenzie’s death in 1938, the building continued to have an intriguing history. It was Canberra’s first morgue and for a short while stored the body of the ‘pyjama girl’, a young woman found on a road near Albury in the 1930s with a bullet to her head. Wearing yellow silk pyjamas considered quite exotic during the Depression era, she became known as ‘the pyjama girl’. 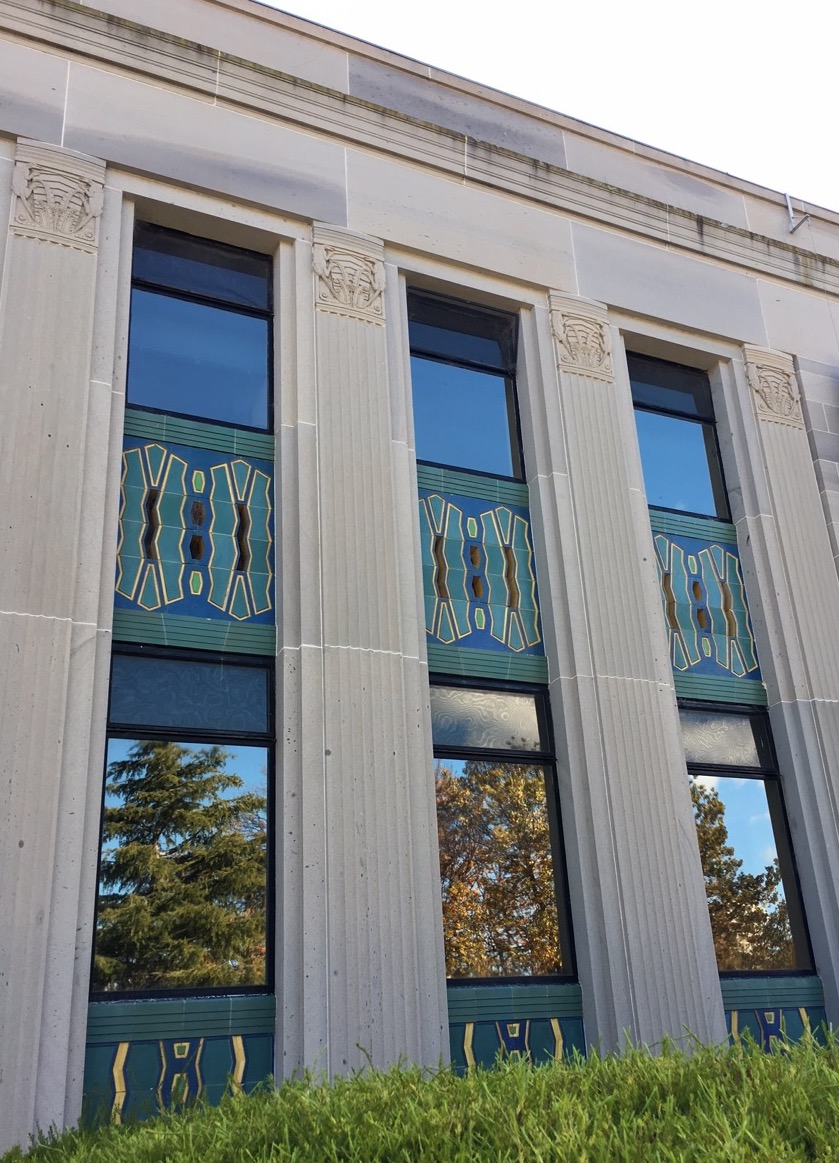 Mystery still surrounds her death and identification even though her husband was convicted of the crime. Perhaps it is the pyjama girl who gives the building its ghostly reputation or maybe it’s the spirits of so many animals and human parts involved in dissection and research.

Former staff tell of witnessing unexplained happenings when working late at night while students who attended Canberra High School next door to the institute, steered well clear of the building.

More recently a team of paranormal investigators from Ghost Hunters of South Coast and Territories – or GHOST – stayed the night in the building. Led by Dan McGrath, declared ghost hunter, the team used technology to detect movement and recorded a shadow figure, along with some unusual clicking sounds near where Ned Kelly’s skull is said to have been located. 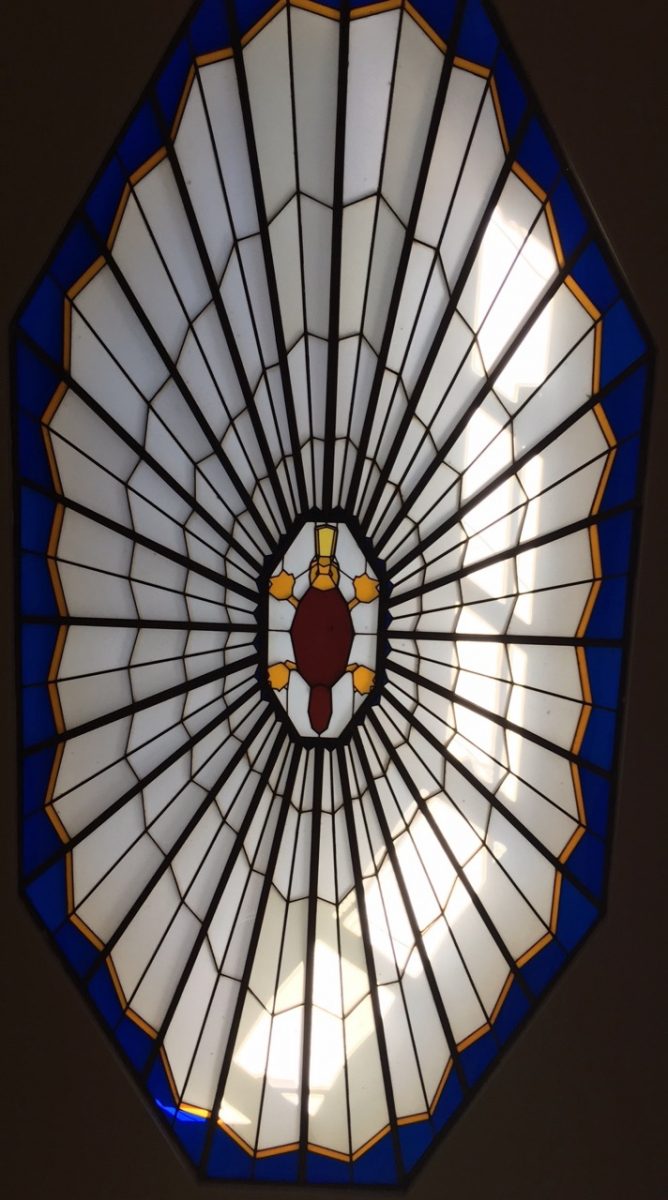 The stained-glass platypus-featured skylight takes pride of place in the foyer of the National Film and Sound Archive building. Photo: Marg Wade.

Now the home of the National Film and Sound Archive with its exhibitions, events and screenings, the building is definitely worth a visit.

But Sir Colin MacKenzie still remains close to the building’s heart. His ashes are interred behind a plaque within the foyer.

Footnote: MacKenzie also established a property for breeding animals for his research, which led to the establishment of Healesville Sanctuary. The extensive collection created by MacKenzie is now an important part of the National Museum of Australia. The zoo never came to fruition because of limited finances during the Depression.

Phar Lap’s heart was there…I loved that place as a kid.

Wow Tim, you’re getting all the online attention at the moment!

I don’t think I would be able to see a ghost- my last partner said I was pretty insensitive. 🙂

A visit to the Institute of Anatomy was always a fascinating day out as a kid…although I have strong memories of the remains of indigenous Australians and their cultural items being displayed essentially as zoological specimens. Appalling to think that it seemed normal at the time, and I’m really not that old