Do you recognise the bicycle bank robber? 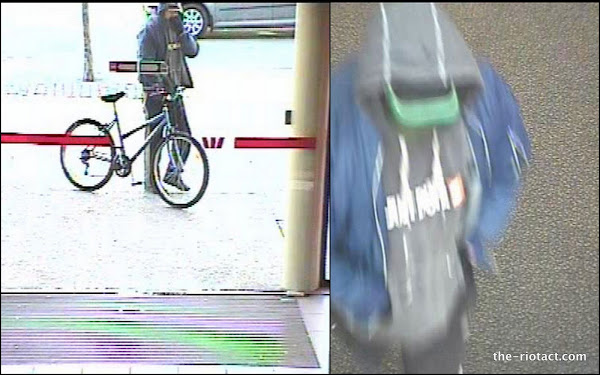 ACT Policing has released CCTV images of the man responsible for an aggravated robbery in Civic on Friday, July 20 in the hope someone can identify him.

The man entered the Westpac bank on Alinga Street, Civic, around 3pm, and threatened a teller with what appeared to be a firearm.

He took a sum of cash and left the bank on a blue bicycle. There were no customers in the bank at the time of the robbery.

The man dropped a bundle of stolen cash on the footpath on the corner of Rudd and Moore Streets. The cash was handed in to police a short time later.

The man is described as a Caucasian in appearance, approximately 183cm (6’) tall, aged between 40-50 years old with a medium build. He was wearing black tracksuit pants, and a dark jacket. He had an item of clothing covering his head and the lower part of his face.

Police are urging anyone who recognises the man in the CCTV images to contact Crime Stoppers on 1800 333 000, or via www.act.crimestoppers.com.au. Information can be provided anonymously.

I can tell from the frame shape that he is a girl.

I can tell from the frame shape that he is a girl.

if cyclists had rego plates, we could stop this 😛

Plates that are small enough to be safe for pedestians and other cyclists in a collision would not be legible, plus they’d be easy enough to steal if they can be safely attached to a carbon frame.

Are these the best pics they have? Westpac must have crap CCTVs…

if cyclists had rego plates, we could stop this 😛

Well have wonderd often how cyclists afford those expensive carbon based treadlies, and the very latest in spandex, Tsk a scurilous lot.

Jan McElligott Jan - you do understand that there are two chambers in the federal parliament, don't you?… View