Does a shovel of ashphalt count as a repair? 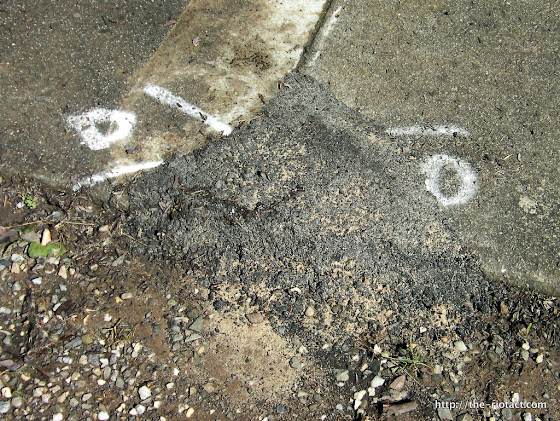 Well above is what my street got this week. A bloke with a shovel full of ashphalt over concrete. 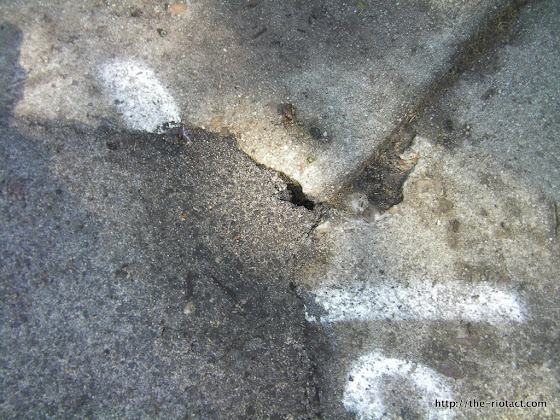 9 Responses to Does a shovel of ashphalt count as a repair?
Filter
Showing only Website comments

Harden the fuck up. Check out the state of Sydney’s roads before complaining. Canberra’s roads are well maintained by comparison.

oddly, when they replaced the footpath outside my house and dug a chunk out of my ashphalt driveway (was there when I bought it . . ) I was told it would take a while to repair because they would save up all the ashphalt repairs and then do them all at once, as it required special machinery etc (whereas they could do concrete straight away). It was duly repaired a few weeks later.

I suspect someone had some ashphalt left over and was told to go around and do temp repairs with it rather than have it go to waste.

For those who are too lazy to go find the site on their own, here’s the Canberra Connect “Ask A Question” page: http://www.contact.act.gov.au/app/ask

Apparently, roads aren’t worth spending money on unless that money is funding a new bike lane.

Y’know, I’d suggest you go hide back under your bridge, but then I realised that all the money we are spending on roads still doesn’t buy us bridges that stay up. One fell down while being bulit, and another is being blown up this weekend. So I realised that it’s not so much that the money’s not being spent on roads, it’s just that what the money’s buying isn’t worth spending money on.

Thus your comment is true – roads aren’t worth spending money on. As for new bike lanes, they are being added to roads as and when they are being resurfaced. The bike lane happens because the road resurfacing happens, not the other way around.

You could go to TAMS and ask for a schedule of roadworks and path repairs. You could go to Canberra Connect and ask about planned maintenance of your local road, gutters, bridges, footpaths…

… or you could come to RiotACT and troll from the comfort of your armchair, while the world goes to wrack and ruin for want of one more voice to stand up to Jon Stanhope and his mob (though it doesn’t matter who is in power, they’re all politicians, in the end).

They did the same around my suburb but it was only a temporary measure. About a month later they came back and dug up the entire section of footpath and laid new concrete.

Anyone driving south along the highway from Calwell knows how bad the pot holes can get after the rain.

Funny thing is, they are always repaired within a few days, but they slowly erode away and leave the pot holes bigger than they were.

You’d think they would conduct some sort of preventative maintenance, but I guess that is how they justify employing all those people that actually do nothing.

going to be another budget shortfall for the Mayor and Deputy Dog… Point to Point speed cameras only work if you can speed…. with the quality of roads in Canberra the only thing those or any other red light camera will be good for is being used as ‘evidence’ by insurance companies when they sue the arse off TaMS for damage to cars caused by the road surface.

Apparently, roads aren’t worth spending money on unless that money is funding a new bike lane.

These ‘repairs’ are also being done to roads. I’ve been out of the country for three months and on return, I’m finding that its akin to driving a dodgem car along many Canberra roads to avoid the potholes, Russell Drive being a particularly bad example.

And yes, it was apparently a wet few months which can cause problems, but bandaid repairs like the above are just going to wash away anyway. I’ve lived in Canberra for a bit over thirty years, and over just the last few or so, there has been an extremely marked deterioration in road standards. Did the rot start to set in with the squiggly line repairs?

Carolyn Mueller - 39 minutes ago
I do so agree with this sentiment. Let’s take the unique opportunity to rethink our lives, our aspirations and what makes a... View
Sharron Gozzy - 50 minutes ago
Working in retail things changed but they only got busier, customers got grumpier and more demanding. I wish life would slow... View
Chris Johnstone - 2 hours ago
Yep things have changed for me......no way I’m going back the way it was View
Community 132

Rob Payne - 1 hour ago
Jade Hawker fair enough then View
Kaye Hainsworth - 2 hours ago
Please don't cut those trees,they are absolutely beautiful, colour full on the side of it its awesome when people driving pas... View
Pam Dick - 7 hours ago
These popular trees represent a soldier killed in the ww1.The were planted by the by the town's population to honour them. Le... View
News 26

Neil Chandler - 2 hours ago
I would have thought that whatever "heritage" the area had, both european and indigenous would have been pretty much devastat... View
Stuart Roesler - 5 hours ago
The area is wasted. No one uses it currently and it is pretty rubbish as far as parks go. Build it up and make use of the wat... View
Juliet Jackman - 9 hours ago
Ok I've read it now. I feel they are clutching at straws to be honest considering we are talking about an area of carpark foo... View
Food & Wine 5

Rose Mary - 2 hours ago
David Blanchfield put it on the menu! View
News 3

Nikos Manikas - 9 hours ago
Dianne Latimer if Brisbane get a 2nd team then all Ch9 will do is alternate between the 2 Brisbane teams. just like now they... View
Food & Wine 128

Emma Jelbart - 11 hours ago
Meagan Kopatz I'm in Fraser and heard something like about the time you would have heard that bang (or boom?) in Kaleen. Agre... View
Food & Wine 1

Lin Van Oevelen - 12 hours ago
That's excellent news! I rarely find the time to get to the markets and their fruit and veg is so much fresher than that from... View
Opinion 39

Christopher Cuba Rabanal - 12 hours ago
We don’t put a price on people’s lives. This is the teachings of our great society and Nation. So let’s not start now. View
News 72

The longstanding saga of Braidwood’s historic highway entry lined with golden and Lombardy poplar trees is progressing to the next...
News 72

Mystery surrounds a loud bang heard early this morning in Belconnen and Gungahlin but it's not the first to be...
Community 132

@The_RiotACT @The_RiotACT
Fluff your beanie, wax your skis & get familiar with the term aprés-ski because an Aspen-like ski resort could be on our doorstep in a few years if John Barilaro gets his way https://t.co/I01z1kXq9x (1 hour ago)

@The_RiotACT @The_RiotACT
With more local businesses turning to home delivery each week, one of the latest is a big name in fruit & veg, Ziggys Fresh https://t.co/CbJxNYEY3y (12 hours ago)