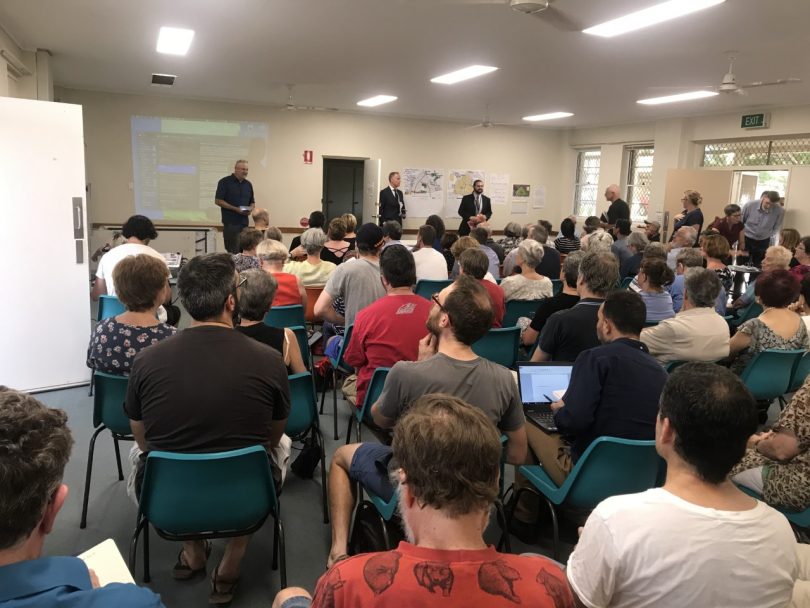 Downer residents are spoiling for a fight with the territory government, after the government has signalled it will allow 12-metre high apartments to be built in their suburb.

In a town meeting on Monday (4 February), community organisers laid out battle plans to oppose the “urban densification” of Downer. Residents said that the government had refused to listen to them, and had treated public consultations as “fake listening exercises”.

Many were disappointed that Chief Minister Andrew Barr’s office had “snuck” out the new planning document – in which the rezoning proposals were mentioned – in the lead-up to Christmas.

“There is a lack of consultation and listening to people. We do not support the piecemeal way in which this is being done,” Suzanne P., a member of the Downer Community Association, told a packed-out town hall.

“There is no good planning justification for rezoning Downer. Ninety per cent of community land in Downer has already been sold to private developers. There is no school. There are narrow streets and most streets lack footpaths.”

“The government is doing this having refused to invest in infrastructure.” 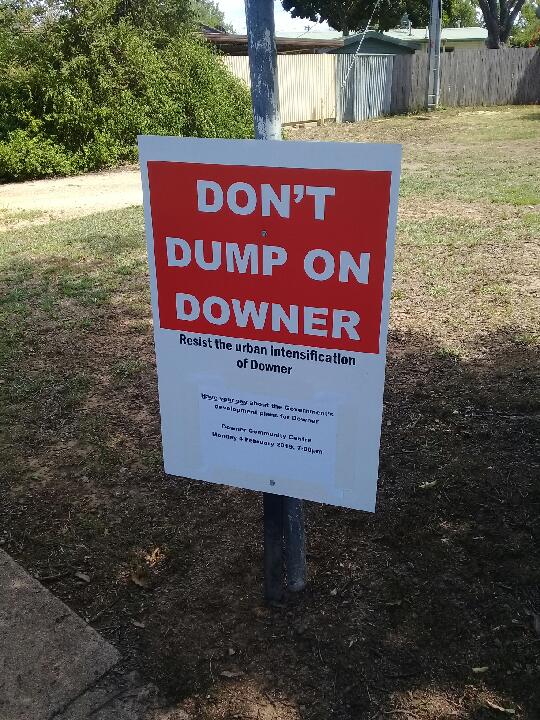 The community is concerned the ACT Government is not taking on board community consultation.

The attendants, who tilted female and older, expressed fears that high rise apartments would turn popular streets into “rat runs” during peak hours. They claimed that no appropriate traffic management measures had been laid out by the government, meaning that commute times would likely swell.

The detrimental environmental impacts were also stressed. Residents said trees and vegetation would need to be stripped away to make room for multi-storey apartment complexes.

There were no vocal residents in attendance that supported the government’s proposals.

“We already have an RZ3 zone on Antill St and developments on the former school site,” said Miles Boak, the DCA convenor.

“We’re already making a contribution. It is unreasonable that they’re asking a whole suburb be subject to higher densities.”

“There is a kind of corporate property agenda taking over Canberra,” said Carleton Christensen, a former philosophy professor at the ANU.

“They know they can’t just release land on greenfield development forever. So what they’re doing is redeveloping sites that have already been released for development. So turning these suburbs over for development is a way in which they see themselves solving this financial problem.”

Under the new planning strategy document, almost 80 per cent of Downer will be subject to rezoning. The government has justified the rezoning on a number of grounds, including proximity to light rail stops and local shops.

The planned rezoning requires the approval of the Federal government, which controls the National Capital Authority and some of the land on which the proposed rezoning would occur.

The DCA’s representatives said they would meet with Mick Gentlemen, the ACT planning minister, on Wednesday (6 February).

Guess it was good while it lasted. At least historians will still have the Griffin plan to consult, to see what a great city Canberra was once planned to be.

If people in Downer want to have more control over government policy and get the kind of infrastructure that would actually improve the neighbourhood, the fastest way to do that is to accept a greater population density. The reality is that rents in the ACT are the most expensive in the country and housing prices are out of reach of most people. Rezoning to allow greater density is going to be necessary as Canberra continues to grow, and it's a shame that some people are unwilling to accept that the reality of living in a growing city is progressively denser housing as the city centre expands. If you don't like it, sell your property (which will likely grow more valuable anyway as development gets easier with the rezoning, not to mention the easy access to the light rail) and move to an outer suburb or into the country.

Not a good option for retirees who are getting too old to drive or walk far.

Jordyn Gibson local residents aren’t opposed to more people moving into the suburb, just the slapdash way in which re-zoning is done (lines/bubbles on maps without site visits), and particularly the issue of not simultaneously upgrading community infrastructure (eg - traffic calming, better footpaths/cycle paths, playgrounds, improved access to light rail, public toilets etc). Downer lost 90% of its community zoned land when the old school site was demolished and sold to developers (for townhouses and apartments). Residents are keen to ensure that densification takes place in a way that doesn’t compromise the character of the suburb.

Got out of Sydney as it was going to the dogs, now here is too. This is all property ponzi because our governments cannot be bothered to create real industry.

This aligns with plans to redevelop EPIC into 8000 homes to sustain the tram. Canberra's character and serenity are features of the past.

Louise Fitzgerald what as per the business case?

Are they really getting rid of EPIC? No more Canberra show or horse and dog events? Folk Festival?

WTF is going on in Canberra? Ruining what was once a unique and beautiful place into a train wreck.

It is no longer a country it is now....a city

If they are increasing the population so massively, bulldozing the school last year looks like a big mistake.

They really made a big mistake there

Why doesn't that surprise me..Ed

Nat Smith - 24 minutes ago
I know people that are waiting for two bedroom houses for 7 years . They have not replaced civic Kingston or narrabundah apar... View
Food & Wine 5

Downer frogs settle into new home, with a little help from their friends