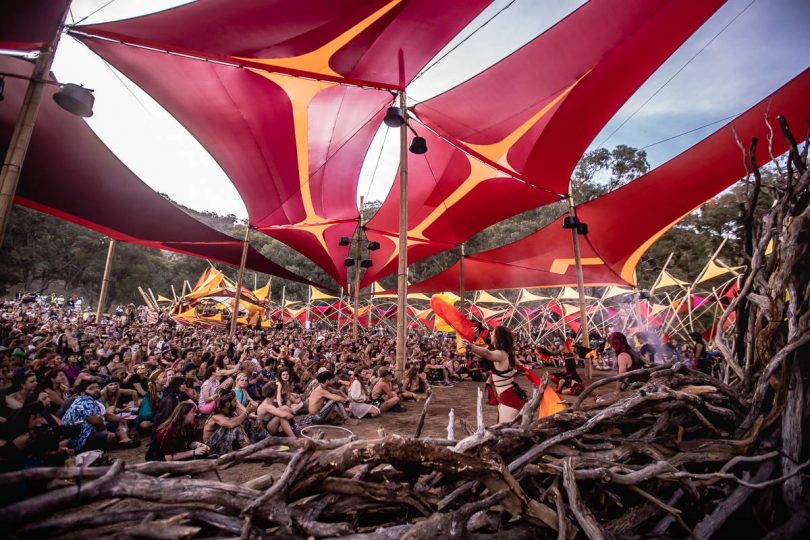 This year’s Dragon Dreaming Festival at Wee Jasper has been postponed. Photo: Facebook.

The longtime hosts of the Dragon Dreaming Festival at Wee Jasper, which has been cancelled this year, have expressed frustration and disappointment with its characterisation as a drug risk. They say that the Festival is an economic and social benefit for the Yass community with strong ethical foundations.

This week, organisers announced that Dragon Dreaming would not take place this November, citing “the intensity of delivering this work, along with the current political pressures from the NSW Government”.

Since March, NSW music festivals have been required to hold a licence if there have been deaths at past events or authorities hold concerns over safety. A 23-year-old woman died at Dragon Dreaming in 2015 and last year 38  festival-goers were charged with 49 drug-related offences.

But Helen and Ian Cathles, who have hosted the event on their “Cooradigbee” property for the past seven years, say they continue to be strong supporters of the Festival and would welcome it back next year.

“Having the police intercepting drugs outside the festival is great, and if they pick up the pushers, then hallelujah as far as I’m concerned,” Helen Cathles told Region Media.

The Cathles say they are not naive about drug use at the festival, but believe that its impact at Dragon Dreaming is not being portrayed realistically.

“Drug and alcohol tests are done when people leave grand finals and the Melbourne Cup, and in perspective with those events, it’s far from high at Dragon Dreaming. It would be better if it was zilch, but that’s no longer true even in small country communities.”

“It totally frustrates me that people are always putting Dragon Dreaming down. The people who run it have clear ideals about what they want to achieve. They presented to Ian and me seven years ago and we decided that we’d definitely help them make sure it happened.

“We remain very happy for it to be at Cooradigbee because of the ethics behind the event, which is an opportunity for like-minded people to enjoy a lifestyle and music festival.

“They run yoga and deep meditation sessions, there is a brilliant children’s activities area and they now have some fabulous international guests coming to it.”

Concerns over access to emergency services due to the festival’s location and the fire risk have also been raised, but Mrs Cathles said the likelihood of a bushfire at Wee Jasper in November was remote at best, while hospital and emergency services in Yass are less than an hour away.

The Festival is run on a volunteer basis and when the decision to postpone was announced, organisers said via social media that “working as a not-for-profit collective takes a lot of dedication and commitment, and we have struggled of late.

“It has impacted on us both mentally and physically.”

They plan to put the Festival in recess for a year and have offered refunds to patrons who had already bought tickets.

Mrs Cathles says that the annual event has had a significant impact on the Wee Jasper and Yass local economies, and that community surveys have substantially endorsed its value. Local fuel and food retailers benefit directly and the Festival has also donated to the Wee Jasper Public School via collecting recyclable waste.

“I completely understand the decision because there are so many facets when you put on a festival. The Dragon Dreaming people are always focused on doing the best job possible. They employ best practice, they make sure patrons are safe and have the best opportunity to maximise the music and lifestyle,” Mrs Cathles said.

“We need the opportunity to nurture people and teach them better ways to enjoy themselves and at Dragon Dreaming, people are getting high on community and the music.”

Something NEEDS to change. Shutting festivals down because people are taking drugs is a complete cop out.

it doesn’t take a brainiac to realise that drug abuse is an issue to society but shutting down a festival that runs for a long weekend isn’t going to stop people in NSW overdosing altogether now is it... so NSW GOVERNMENT!! let’s have a look at these statistics shall we.. let’s talk about what’s ACTUALLY being done about the real issue.. other than throwing someone in the slammer over and over and expecting them to magically rehabilitate themselves without community, without support and love.. DRAGON DREAMING is all about embracing community spirt and love! People die everyday...life is short. Stop taking away the one thing that keeps us connected, grounded and expressive for goodness sake! The war on drugs will only breed more insidious outcomes. This is not the way! How about we show some progression. I’m gonna start with two words. PILL TESTING!!

what a shame. Dragon Dreaming is a fantastic festival! hopefully held next year, once a ‘license’ can be secured

How about we test everyone coming out of the casino for drugs and if there’s more than 1% like dragon then we should apply the same rules to the casino and make them pay for 1 cop at double time for every 50 guests and have those cops walking everywhere, intimidating customers. Never going to happen.

Riley Helmling - 2 hours ago
Peter Bee Using your excellent suggestion, Australia day would be moved to the 23rd March, 1804 when Matthew Flinders coined... View
Spiral - 5 hours ago
All cultures have good and bad aspects. Australia Day commemorates the event which ultimately led to the creation of our coun... View
Daniel Evans - 5 hours ago
It's about drinking beer, lamb on the Bbq and unwavering patriotism with national flags everywhere and hanging out doing all... View
Opinion 29

Judy Costello - 4 hours ago
So a prior liberal candidate criticises the ACT government.... with no disclosure of political allegiances or independent rea... View
Trish Roberts - 8 hours ago
WHY? Wrong priorities. View
News 20

Karen Feng - 7 hours ago
I thought I'll share this. If you can try to leave some clean water out for creatures big and small. https://youtu.be/FYQQ1CI... View
show more show less
*Results are based on activity within last 7 days

Member for Bega and NSW Transport Minister Andrew Constance has issued a plea to Canberrans to release vacant holiday homes to bushfire...
*Results are based on activity within last 7 days

Spring into Yass: Region awakens from winter with a range of special events

Chisholm Vikings to host a brand new Battle of the Bands

@The_RiotACT @The_RiotACT
RT @JesMullins: My friend cycles 500km in 5 days to raise money for charity. This year he has arranged for orgs to match funds raised $ fo… (27 minutes ago)