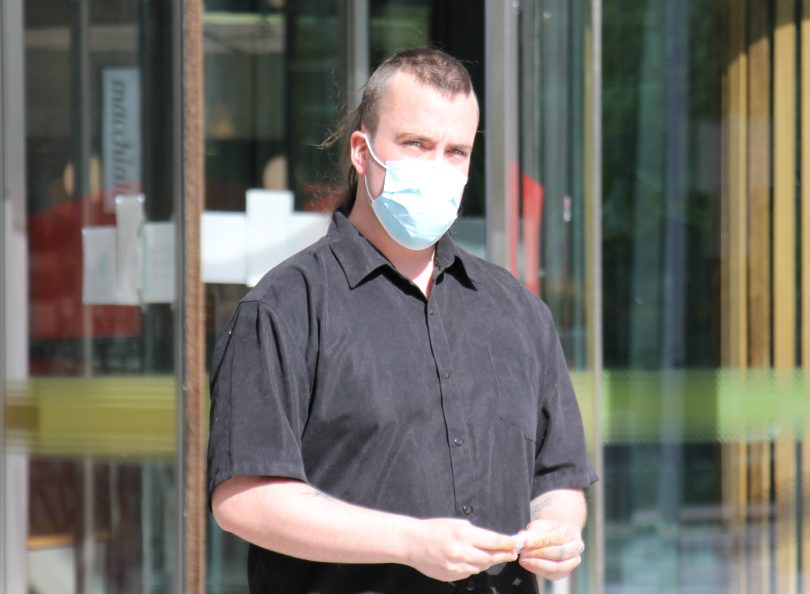 Jordan Elias Crooke, 23, avoided being sent to jail for his role in a shooting when he was sentenced on Wednesday. Photo: Albert McKnight.

A young driver from Batemans Bay bent to his boss’s “stronger will” and helped him fire a couple of shots at a family’s home while the parents and children who lived there sheltered in a bathroom.

Brodie Owen Antoniak, 32, has already been jailed for firing at the Narrabundah home of his long-time friend on 3 November 2020.

On Wednesday (23 March), the tiler’s employee, 23-year-old Jordan Elias Crooke, was spared time behind bars when he was sentenced in the ACT Magistrates Court for his role as the driver at the shooting.

Magistrate Glenn Theakston said a dispute had begun between Antoniak and his friend over a ute before Crooke drove him to the home.

Antoniak kicked a hole in a gate, jumped on a car, then pulled out the sawn-off rifle, causing the home’s residents to flee, fearing for their lives, as he fired several shots into the front doorway area.

He returned to their car and Crooke began driving away, but then did a U-turn and came back to the house where his boss fired two more shots at the home. They then left the scene.

Magistrate Theakston said Crooke’s offending started when he made the U-turn because, before that, he was not aware of what was going to happen and was, in fact, “surprised” by what was going on. He didn’t know the gun had been in the car.

Crooke’s Legal Aid lawyer Mr Chen said his client had schizophrenia and an expert found a causal link could be drawn between his mental health and his offending.

He said a personality test showed Crooke was “passive and suggestible” and argued he had submitted to the “stronger will” of the “mastermind”, Antoniak.

Crooke had “nothing to gain” from helping him, Mr Chen said. Also, while he had assisted him, it was “not by much”.

Prosecutor Sam Bargwanna argued there were opportunities to cease his involvement in the incident before Antoniak returned to the house for “round two” of the shooting.

Magistrate Theakston said the levels of seriousness between the two offenders was very different and features suggested Crooke was “at the mercy” of his older boss.

Crooke, who had spent three days in custody, pleaded guilty to aiding and abetting the discharge of a loaded firearm. Other charges were withdrawn.

He was sentenced to three months’ jail, fully suspended for a 12-month good behaviour order.

Antoniak was jailed for two years and two months and is eligible to be released in May 2022.