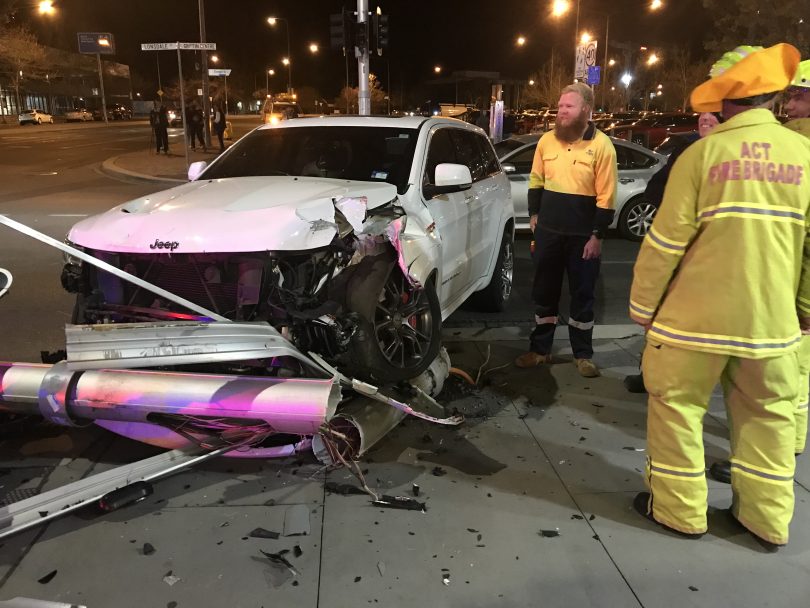 A drunk driver has wiped out a set of traffic lights, crashed into two cars and nearly entered the shopfront of a nearby restaurant at a busy Braddon intersection on Monday night (1 October).

Around 7:40 pm on Monday night, emergency services were called to a crash in Braddon after an SUV collided with two vehicles before taking out the traffic light at the corner of Cooyong Street, Genge Street and Lonsdale Street. 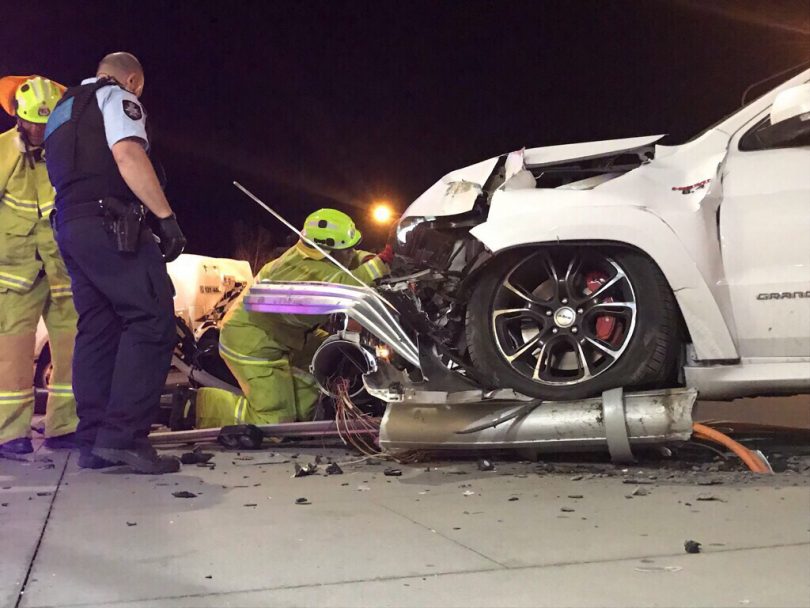 The vehicle narrowly missed pedestrians on the sidewalk and nearly entered the shopfront of Zeus Street Greek restaurant.

Police tested the man with a breath analysis and he returned a positive alcohol test almost four times over the legal limit.

The driver will be summonsed to appear before the ACT Magistrates Court at a later date.

Around 7:40 pm on Monday night, emergency services were called to a two-vehicle accident in Braddon. An SUV and a car collided, wiping out the traffic signals near Cooyong Street, Genge Street and Lonsdale Street. Read the full story here: http://ow.ly/5wbi30m3upn

Chris Hobbs - 6 hours ago
Time will tell. If they are pragmatic and able to adapt their ideologies to actual plans and policies, it will be an interest... View
David Brown - 9 hours ago
They got disaffected votes from people fed up with both majors. If the Libs can find a moderate leader and develop some sensi... View
HiddenDragon - 9 hours ago
Most of what we've seen from the ACT Greens in the last few terms of government has been fairly standard stuff from the polic... View
Property 37

Capital Retro - 6 hours ago
One comment on this thread was the Australian Electric Vehicle Associate has given advice to the ACT govt. on its policy that... View
Heavs - 10 hours ago
Five superfluous words in that last sentence. View
JC - 11 hours ago
What policy? Always trying to make a political point. What’s clear is you don’t know much about electronics and electrica... View
News 1

russianafroman - 9 hours ago
Terribly underfunded. Around Gungahlin it's hip height. There should be double or triple the amount of mowers. It's not justi... View
News 32

Michael Hourigan - 17 hours ago
Except that it doesn't Joe View
Lloyd Woodward - 1 day ago
Stop with this boomer thing. Im apparently a Boomer, but think this is a great idea. He is just a sad Panda.... View
News 1

Nick Sifniotis - 19 hours ago
I want this View
News 15

Court Watts - 21 hours ago
Sally Barton Hopefully come March there won’t be any restrictions View
Sally Barton - 22 hours ago
Court Watts - this is good news 😊 View
Nicole Lawler Inveen - 1 day ago
Grace Byrne what a difficult time for you and your family. I hope your little girl gets to meet her baby brother, and that yo... View
Sport 9

Around 40 people evacuated after fire in Braddon apartment

@The_RiotACT @The_RiotACT
Miss the music: the @CBR_Symphony will be back in 2021 with a new team, old favourites and fresh Australian works. Check out the program https://t.co/rdarOqWtAd (7 hours ago)