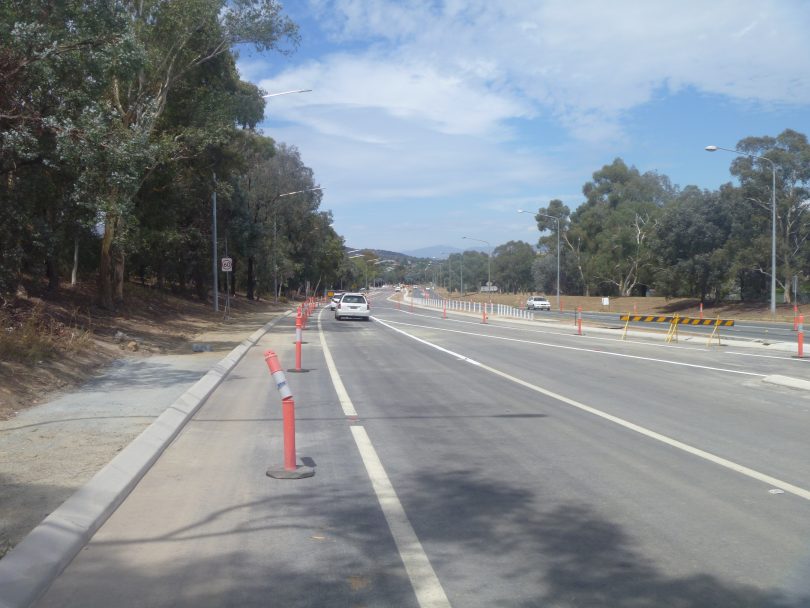 The new section of the road that was part of today’s traffic switch. Photo: Supplied by Transport Canberra.

Southbound traffic between Erindale Drive and Isabella Drive will be moved onto the new section of road today (23rd February) with the duplication of Ashley Drive one step closer to completion.

Following the first stage of the traffic switch in late 2017, the second stage will provide better access for the construction team to complete their final months of work. The new stage follows the completion of the noise walls and works on the underground services with the underpasses on Statton street and Bugden Avenue.

Director of Capital Works from Transport Canberra and City Services, Ben McHugh, said there were only a further two milestones before the project’s completion.

“We expect the traffic lights to be operational in April 2018, with the project to be completed soon after that.”

“A priority of this project was that it was delivered as quickly as possible to minimise the impact on the community, and I am pleased to say that we have met all major milestones within expected timeframes thus far. Road users can look forward to the completion of the duplication and a less congested commute soon,” Mr McHugh said.

“This upgrade to Ashley Drive will not only significantly increase the capacity of the road and save commuters time each day, it will also improve road conditions for cyclists and pedestrians providing benefits for all road users.”

Roadside signage will alert road users to the changed traffic arrangements with a speed limit of 60km per hour will remain in place until works have been finalised.

Sean Harvey say’s the Ashley Drive Extension was “due in early 2018” in every article he has seen.

2018 started being promoted as the finish date ‘after’ the Government realised it wouldn’t meet its original targets for duplication (that Tuggeranong politicians kept mooting for many many years).

Light rail will get to Ashley Drive first 😎

nah it was due for completion early 2018 in every article I've seen.

The road is taking longer to build than Hadrian took to build his wall.

Not if Lack are involved.

So the Director of Capital Works says the priority was to get the project finished as quickly as possible.

Considering duplication of Ashley Drive as the busiest single lane road in Canberra, was promised to be finished in 2015/16 by Chief Minister Katy Gallagher, (following over a decade of unfulfilled Labor pre-election promises to duplicate the road – in the next term from 2002)

I’d hate to think of the wait if speed to completion wasn’t the highest priority for the ACT Government.

Given the delays experienced with this project that you have alluded to there is no way the light rial from city to Gungahlin is going to be completed by August this year.

Where are they going to put the second one?

I don’t want to pay for that.

Only for half of it, if I recall. The path veers off towards Greenway, rather than continuing south. Martin will know.

There are shared paths and cycle lanes in the ACT. There is a concrete path on the west side of the road but only goes part of the way and narrows significantly . A protected lane wouldn't have cost much more.

Get the cyclists that want it to pay for it. Cyclists need to do what the car owner already does and start paying toward toward road provision before complaining about narrow cycle lanes.

Iain MacKay Its doesn't matter if only drive a car and don't cycle or walk. Every rate payer in the ACT pays for road/cycle/walk infrastructure. The idea that motor vehicle owners only pay for roads is rubbish!

Another 2 years before the barriers come down?

Just watch out for the manhole, that is protruding will above the road surface, just before the Ashley drive/Isabella drive roundabout!

Ben Jones - 48 minutes ago
No one will go apart from the die hard fans. Until they start winning and the whole of the ACT become fans overnight. View
News 116

Julie Macklin - 6 hours ago
Elizabeth Ann Thurbon Not unique to Australia. I've arrived at towns and cities in Europe and found the station wasn't in the... View
Yvoir Hingee - 6 hours ago
A joke. I last used it twice once in the 1950s and once in the 1960s, and the experience was so bad I promised myself never t... View
Julie Macklin - 7 hours ago
Anura Samara It's not in the middle of "nowhere" for people who live in the local apartments, such as the Kingston Foreshore,... View
Community 12

David Newman - 8 hours ago
Kylie Tinnock, yes, we have all been offered the vaccine equally but those who choose not to vaccinate are not treating other... View
Kylie Tinnock - 9 hours ago
No we should all be treated equally View
Breaking 86

Wini Harrison - 9 hours ago
I was too bizzy watching movies. View
Julie Macklin - 9 hours ago
Of interest, I found this reference to an early earthquake in Melbourne. Apparently in March 1837 Governor Bourke paid a visi... View
Robyn Patricia Walter - 10 hours ago
I thought “geez that garbage truck is coming down the street a bit too fast”. It was a few minutes later when there was n... View
Opinion 196

Matthew Robinson - 9 hours ago
Would be great but no way the government would support it. View
Peter Hyde - 10 hours ago
Hopefully it will happen. Think of the tourist $s View
James Farrugia - 11 hours ago
GET THEM HERE!!!!! It will bring a needed boost to the hospitality and hotel industry the capital needs! View
News 14

@The_RiotACT @The_RiotACT
Raijin Japanese Cuisine, a hidden gem in McKellar, has found a way to help those in need during lockdown https://t.co/qF5SyeJre9 (11 hours ago)