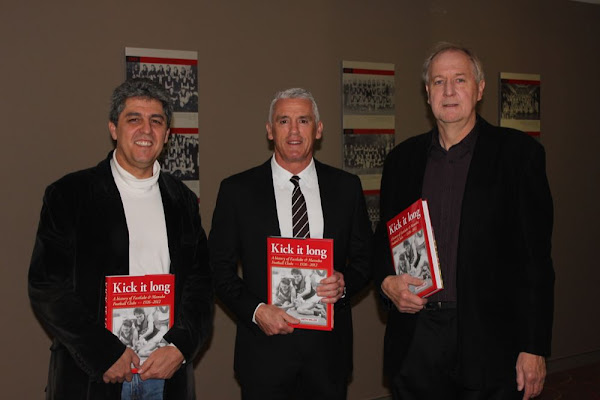 The Eastlake Football Club are sharing their long history:

Miller’s book explores the history of Canberra’s oldest Australian Rules Football club, which was founded in 1926, as well as that of Manuka Football Club, which merged with Eastlake in 1991.

Miller’s extensive experience with the club included time as a captain, coach and player between 1978 and 1985.

“It was an absolute privilege to be asked by the Eastlake Board to author this book,” said Keith Miller.

“The book maps out the path of two clubs who created a rich tradition of fierce neighbourhood rivalry for over half a century then found themselves joining forces to survive.

“It is a history that has its origins in the formation of Canberra and parallels the changing economic, social, sporting and demographic development of Canberra.”

Peter Hyde - 2 hours ago
Margaret Dudley because eventually there will be light rail from Woden/Tuggeranong, Belconnen and Gungahlin to the city rathe... View
Yuri Shukost - 9 hours ago
Barr will find any reason not to build a new stadium or renovate the existing one. I suspect he’d find the money if it affe... View
Fred Pilcher - 10 hours ago
Good news. Sanity prevails. View
News 64

Suz 'olmes - 4 hours ago
How about something nice? Invest some money to clean up the tavern and make it more family friendly or a space for cafes. No... View
Jenny Keeley - 7 hours ago
I already have 3 McDonald less than 10 minutes from my house. Put something else there, anything else! View
Chris Goodrum - 13 hours ago
Many Happy New Years Eve’s spent there, met my partner there many many years ago! It should be heritage listed not knocked... View
News 19

Julie Macklin - 6 hours ago
And that is the most constructive comment you could come up with 😂 View
Warwick Alsop - 8 hours ago
Gotta love those NIMBYs View
Marea Fatseas - 10 hours ago
Who said the proposed facilities in Fyshwick are “going green”? How is CRS recycling just 5 percent for local use, export... View
Breaking 1

Valleyboy - 6 hours ago
NSW has every right to protect itself from potential threats from any prospective entrants, including ACTians. The ACT also h... View
Property 54

Chris Endrey - 13 hours ago
Who is most immune to hardship, who is pampered most, living the life that even the Gods would envy? The answer, clearly, is... View
Spiral - 13 hours ago
"But that is, of course, not true – our society chooses to devalue the arts because the focus of all of our energies is mon... View
Acton - 16 hours ago
Many, if not most in the arts community have long shown utter contempt for us in the broader community and made a living out... View
News 15

Jim OR - 16 hours ago
Imagine a border lockdown between the two... View
News 53

@The_RiotACT @The_RiotACT
$100,000 reward on offer for information that helps solve the mysterious disappearance & suspected death of Amber Haigh in 2002 https://t.co/0U5m9hj9rv (2 hours ago)

@The_RiotACT @The_RiotACT
Interested in purchasing a home through the land rent scheme? Check out this beautiful four-bedroom home for sale in Moncrieff https://t.co/C8dibvyzPU (4 hours ago)