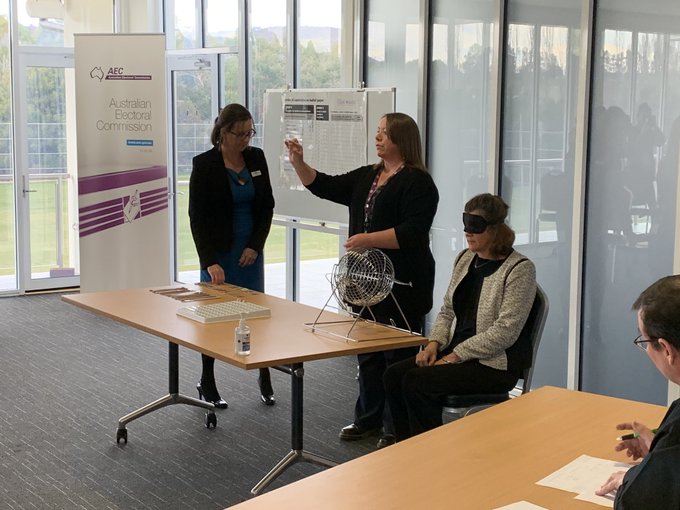 The ballot paper for the Eden-Monaro by-election has been revealed by the AEC. Photo: Twitter (AEC).

Shooters, Fishers and Farmers candidate Matthew Stadtmiller will be the first name on the ballot paper at the upcoming Eden-Monaro by-election after the Australian Electoral Commission (AEC) conducted a randomised draw yesterday (10 June).

Labor candidate and Bega Valley Shire Councillor Kristy McBain will appear eighth on the ballot, while her main rival, the Liberals’ Dr Fiona Kotvojs, will appear last in 14th position.

Around 115,000 people are enrolled to vote in the by-election which is scheduled for 4 July, although pre-poll and early voting will start from Monday, 15 June.

The by-election will be held during school holidays this year, a break from normal practice, to give schools that double as polling places more time to thoroughly clean halls and grounds after voting on Saturday.

Other hygiene and social distancing measures will be put in place, and the AEC is encouraging voters to bring their own pencils or pens, although single-use pencils will be available at polling places. 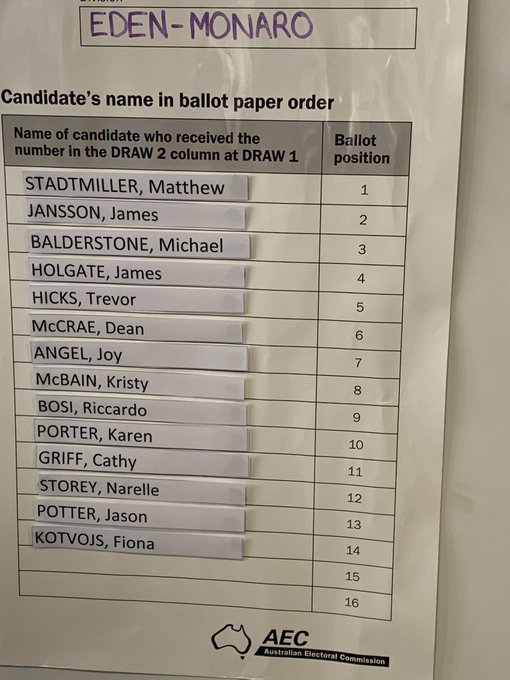 The order the candidates’ names will appear on the ballot paper at the upcoming by-election. Photo: Twitter (AEC).

Residents will have to line up outside and the number of people allowed in halls will be controlled and counted. Extra queue controllers will be on duty to monitor social distancing requirements, hand sanitiser will be provided and writing surfaces and voting screens will be frequently wiped down.

Sneeze shields will also be installed at all ballot-paper issuing points where possible.

The AEC says that although there is no legislation to stop political parties canvassing voters with how-to-vote cards beyond being required to remain six metres away from the polling place entrance, parties should ensure campaigners are following health guidelines.

“Parties and candidates will need to ensure that those campaigning on their behalf near a polling venue have fully informed themselves of NSW Government health restrictions and laws in place regarding social distancing, and that they abide by these directives,” the AEC says on its website.

A range of COVID-19 safety measures will be in place for the #EdenMonaro by-election on Saturday 4 July. Electoral Commissioner Tom Rogers with an update on our planning ? https://t.co/Sq2vUvEs11 #auspol

The expected increase in pre-polling and postal votes, as well as social distancing requirements and hygiene measures during vote counting, will mean a likely delay in the official proclamation of the winner, the AEC says.

“The expected increase in postal and pre-poll votes cast will also impact the speed of the count, noting the legislative requirement to wait 13 days after election day for the return of postal votes,” it said.

“Whilst we are implementing measures to try and reduce this impact, the AEC thanks all electors and participants for their patience and adherence to the new measures in the polling place and at our count centre.”

For more information, visit the AEC.

Nicola Childs a system much easier to rort than the old school way.

opso - 47 minutes ago
As per the first couple of sentences of this story 'From midday today, ACT residents can travel for any reason to an expanded... View
Sam Oak - 1 hour ago
There is no reason for being pedantic with the rules. Ironically as NSW reopened the cases have plummeted showing that Austra... View
JC - 2 hours ago
Yes you have missed something. It is now both directions. The quote below is from the first web page you fine if you google A... View
Property 16

Katie Lew - 50 minutes ago
David Matthews I want this! View
Astrid Smith - 60 minutes ago
Rodney Stubbings I will when I win lotto tonight haha View
Sally Danger McCloy-Bacon - 1 hour ago
Evan McCloy it doesn’t have a lagoon but is still pretty nice… View
Lifestyle 2

TimboinOz - 1 hour ago
hi Jimmy, Is Steve B. still around?... View
bj_ACT - 7 hours ago
I prefer the televised Canberra Sitcom “Parliament House”. Some of the characters are unbelievable. That Barnaby Joyce ha... View
Business 1

bj_ACT - 2 hours ago
I’ve always liked how Meninga actually speaks positively about Canberra. I heard him on Brisbane radio one day standing up... View
News 44

Capital Retro - 3 hours ago
What about the existing multi-mode electricity generating Liddell Power Station and the purpose build (for cooling) Lake Lidd... View
chewy14 - 3 hours ago
Nobody, That isn't an answer. Although it's obvious why you can't properly answer the question. For right or wrong there is n... View
nobody - 6 hours ago
Chewy14, all 45 countries who have-are-will operate nuclear power has faced that question, and each has managed to find their... View
News 3

Maya123 - 18 hours ago
Who's staying at home? I have been out cycling, and walking around the local area and in local bushland. View
Opinion 25

@The_RiotACT @The_RiotACT
At 43, @BrumbiesRugby front rower Louise Burrows may be twice the age of some of her #Brumbies teammates, but she's still at the top of her game and is determined to be selected for next year's Women's #Rugby World Cup https://t.co/cjDGzSy61w (1 hour ago)

@The_RiotACT @The_RiotACT
Getting a haircut, working out and eating out were three things Canberrans couldn't do for more than two months, but now with the lifting of COVID-19 lockdown, here's what day one was like for three local businesses https://t.co/r02sEaQvVV (2 hours ago)