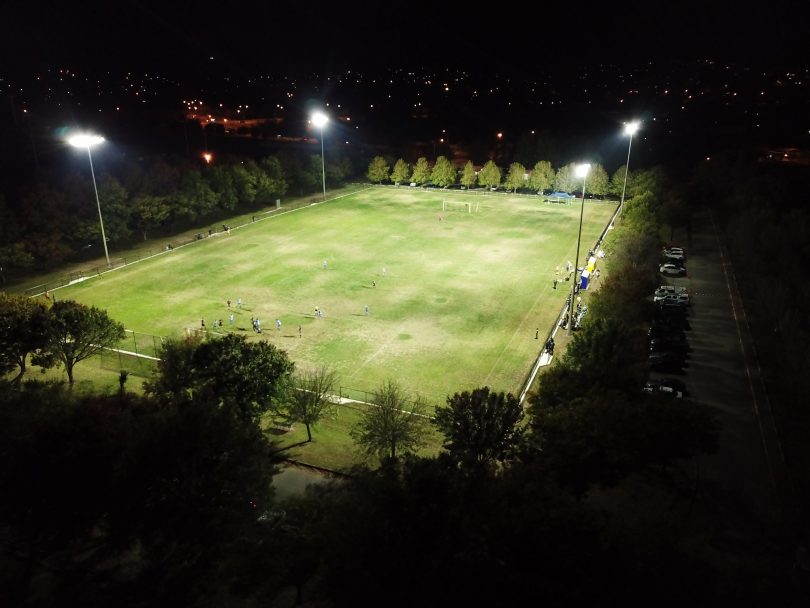 The one-all-draw between Capital League opponents Brindabella Blues and ANU FC was not the most important result on Saturday evening.

Instead, it was the fulfilment of an ACT Labor election commitment which will have a more lasting effect.

The Saturday twilight match between the Brindabella Blues Football Club (BBFC) and ANU Football Club in the men’s Capital League was the first match played under the newly constructed lights at the Calwell district playing fields.

“Whether at an elite or social level, the high-quality lighting will provide better visibility to both the players and the fans that watch from the sidelines.”

“Sports in Canberra always draw large participation numbers and crowds and the provision of state of the art lighting at this location helps to meet this demand,” Ms Berry said.

Turn all the lights on!

Fully automated, the lighting system can be operated remotely and future works will see it integrated with an online sports ground booking system that the ACT Government is currently developing.

The LED lighting system will be energy efficient, given LED bulbs last longer and will also require less maintenance.

“The lights are helping us no end. It’s really good because it gives us the opportunity to play night games and it also gives the opportunity for Canberra to play catch up games there as well,” Mr Yalg said.

“It’s not just for us, we have touch football and softball and other sports that can use the lights as well, so it is a real community benefit, which we need a lot more of.”

Mr Yalg said the LED lights would be a huge benefit in seasons to come.

“Next year we are thinking of having 3 pm and 5 pm kickoffs in the first five or six rounds because it gets too cold later in the year,” he said.

“We would normally have to play night matches under lights at Hawker or Woden so this will give us an opportunity to play home games at home.”

Mr Yalg said the club is now looking to bring in a club room to improve the facilities even further.

“We plan to get some facilities down on that particular oval, with change rooms and a canteen so when we have those night games we can run a small barbeque and a cup of coffee for those watching,” he said.

“We have come up with a few ideas but like everything else, it comes down to dollars and cents, probably looking at $100,000.”

Matt Henry - 1 hour ago
Allison Jay if she says that then u could only blame boring parenting. Canberra is a great place to bring up kids ans live. View
Allison Jay - 1 day ago
Kat Rothwell haha yes indeed View
Food & Wine 111

Jody Kisbee - 1 hour ago
Sounds like a plan View
Jodie Roberts - 2 hours ago
Julia McFarlane what are you two up to this weekend? This looks lovely View
Jo Smith - 5 hours ago
Kathryn Sequoia it sure does K View
Sport 5

Border_Libran - 5 hours ago
Hi A_Cog, I’ve just found your comment, if you still reside at Oaks Estate I would be interested in contacting you, I was p... View
Breaking 1

Capital Retro - 5 hours ago
How unlucky is this dude? I mean, it's hard to even spot a police car in Canberra let alone hit one. View
Property 15

Harley Quinn - 7 hours ago
Canberra has NEVER been a peaceful city. I was kidnapped in 1993. It's nice that some people still have that illusion though. View
Business 18

Bob Jones - 13 hours ago
Deb Wheare And Lynne Meredith... I've heard because of the more right someone who identifys as being an Aboriginal or Torres... View
Kev Martin - 23 hours ago
I find If you stop breaking the law, you don't get locked up View
Deb Wheare - 1 day ago
Jacob Torresan face palm View
Community 12

During the 'unprecedented' year we all experienced in Canberra during 2020, lots of new words and emotions entered my vocabulary....
News 1

The victim of an attempted bag-snatch outside Belconnen Mall last Sunday (10 January) says her impression of Canberra as a...
Food & Wine 111

I am standing on the veranda of Kynefin, feeling conflicted. Meeting friends to experience the café’s pint-sized picnic table feast, I have just...

Higgins oval set for transformation ahead of 2020 winter season

@The_RiotACT @The_RiotACT
Eleven years after he was first drafted into the AFL while still at Erindale College, Jason Tutt is returning home to Ainslie Football Club https://t.co/0D5tHBFya1 (1 hour ago)

@The_RiotACT @The_RiotACT
This remarkable seafront complex for sale near Narooma is your chance to purchase a unique residence with optional tourism business opportunity https://t.co/Fze10GhLLY (2 hours ago)

@The_RiotACT @The_RiotACT
COVID-19 means the Gift of Life organ donation walk can't happen this year, but the need for donors is urgent. Have you had the conversation? https://t.co/SZexK7cwOq (3 hours ago)