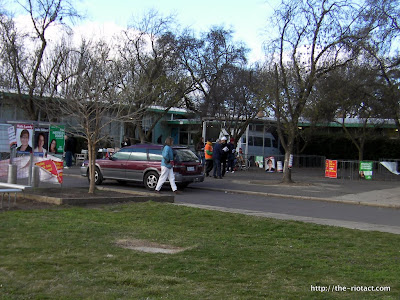 OK, feel free to knock yourselves out in the comments with election related venting.

BTW do you think this banner was meant to create this effect? 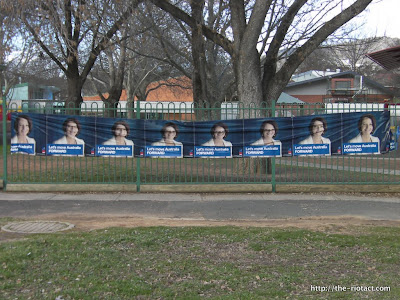 UPDATE: The all important ACT Senate count is up here.

I love to see politicians like this especially when its of their own making.
They actually have to try to think and can’t be fed the answers by their departments or even advisors.
Yes this election has has seen something almost unique in this country. A situation that has not happened at a Federal level for nearly 80 years but that’s not the unique part that’s the politicians actually trying to think for themselves.
A very new experience for most of them and they’re obviously not very good at it.

I find this amusing.

Perhaps you would like to have a look here: http://vtr.aec.gov.au/HouseDivisionTcpByPollingPlace-15508-102.htm

Hmm – publishing the votes of only 12 fairly distinctive voters is cutting pretty close to the line of anonymous voting I think. what if they all voted the same, then we’d be publishing exactly who they voted for. (as it is they seem to have voted just about the same as the rest of Canberra.)

You can’t tell who voted informal. But point taken.

Hmm – publishing the votes of only 12 fairly distinctive voters is cutting pretty close to the line of anonymous voting I think. what if they all voted the same, then we’d be publishing exactly who they voted for. (as it is they seem to have voted just about the same as the rest of Canberra.)

Hmm…\
Do we really only have twelve allowed voters (ie: people serving less than three year sentences) at the Hume cuddleprison at the moment?
http://vtr.aec.gov.au/HousePollingPlaceFirstPrefs-15508-58809.htm
FORMAL: 10
INFORMAL: 2

I thought Green won Ainslie and Aranda and a few others – CT had a list by booth yesterday.

Where’s the ‘Armed Revolution’ box to tick? Where we get to grab the whole stinking lot of them and put them against a wall?

This country needs a good clean out.

What happened to “serving the government of the day”?

I think this election we’re just going to have to wait until all the votes are counted before we know for certain (particularly for all those lower house seats).

Perhaps an IQ test would be appropriate … it would probably spell the death of Family First, which would be an added bonus.

Good idea. It would also spell the end of the NSW Labor Right, many ACT MLAs (all parties – no sectarianism in that statement), and most time-serving federal and state MPs. Lin Hatfield-Dodds would also be excluded if a maths exam were included: http://www.canberratimes.com.au/news/local/news/general/lin-wont-concede/1920646.aspx

Does that make me commie scum?

Apart from not winning the 2PP vote, Abbott has failed to win his own state and has won a majority of seats in only Queensland and WA where there were well funded anti Labor campaigns. So perhaps the three amigos should bypass the Monk and deal directly with Palmer and Forrest.

Not a good result for Labor after a bloody inept campaign, but the conservatariat seem to be conveniently forgetting that Howard’s first term government suffered a similar swing and – unlike Gillard – failed to win a majority of the 2PP vote – in fact, it was the lowest 2PP vote in the five post war elections where the winner did not receive a 2PP majority. Of course unlike Gillard, Howard had the luxury of a huge majority from the ’96 election which saw him across the line and which puts into perspective his much-hyped ‘courage’ in going to the electorate with the GST in ’98 compared with Rudd Gillard’s decision not to test their much smaller majority at a double dissolution.

Jim! You’re back! Damn shame that a political junky like yourself was away on holidays during the last week of an election campaign 😉

So you’re criticising the ALP for funding Defence, are you?

I’m criticising the vacuous belief that the “ALP hates Defence”. Assuming that Captain RAAF is/was military, his trite thinking is a sad reflection on the service. I’d assumed, wrongly, that servicemen understood that support for the ADF has mostly been very strong, and bipartisan, in this country.

But, since you ask, I personally believe Defence is bad at managing money. See any number of ANAO reports if you want to know why I think that. Does that make me commie scum?

It sincerely troubles me that people this stupid are allowed to vote. One of the necessary evils of representative democracy I guess.

Perhaps an IQ test would be appropriate … it would probably spell the death of Family First, which would be an added bonus.

And the bogan Labor heartland.

So is the “ALP hates Defence”, why the f^ck do they keep giving Defence so much of my money?

Because the country, and the ALP, would be royally shafted if it didn’t

Oh… So you’re criticising the ALP for funding Defence, are you?

Melissa Flanigan - 2 minutes ago
Most things to do with the workplace now are designed to be intuitive - so this challenge for kids will greatly benefit them... View
Jodie McGuire - 12 minutes ago
JJ Lindsay I Agree. To be honest, what I’m see is many wonderfully dedicated and competent teachers trying to keep doing it... View
JJ Lindsay - 18 minutes ago
Jodie McGuire I don't disagree. Its just misleading to call this something more as if it has been by design rather than defau... View
News 34

John Dale - 27 minutes ago
Yep, great idea. I don’t see even one appeal coming out of this. Not one. No, seriously.... View
Opinion 15

John Hynes - 28 minutes ago
MB Miyagi or throw matches for bookies like India has done View
MB Miyagi - 30 minutes ago
John Hynes or spending more than they are allowed to like Carlton did 😃 View
Steve Frame - 2 hours ago
Lisa Bishop if they don't pass the money they make from selling the tv rights and selling out stadiums to the players, the we... View
Food & Wine 2