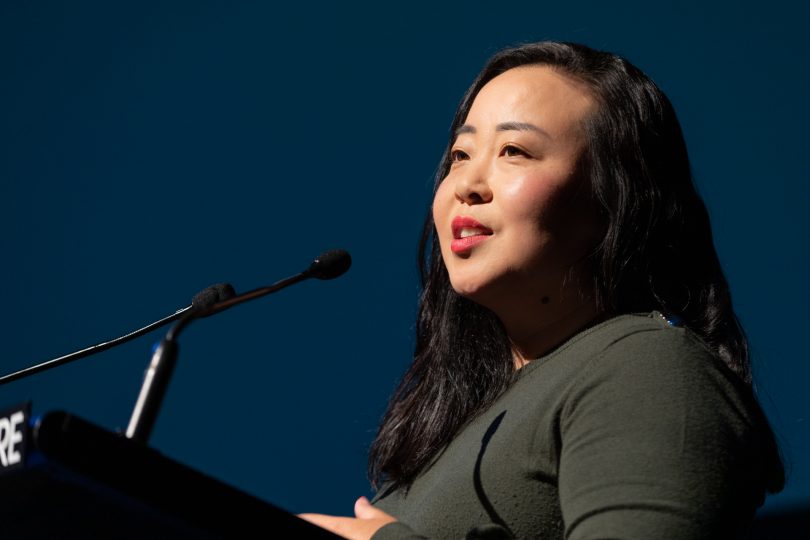 ACT Liberal Senator Zed Seselja incurred the wrath of Chief Minister Andrew Barr when his letter to the ACT leader urging him to reopen the Territory’s construction industry was made public.

Mr Barr accused him of a “political pot shot” and “some pretty ordinary politics” that Canberrans would be disgusted at.

The Senator said he was genuine in his concern for the industry, but the image of an out-of-touch hardliner having a go at the ACT Government as some sort of de facto opposition leader was reinforced.

Unruffled as ever, he followed up with a social media post: “Are you a tradie? Tell me how you are going with the current lockdown and send a message to Andrew Barr to let construction continue.”

It’s not just the tradies. Anybody with a renovation or new home underway will also be worrying about construction delays and repercussions down the track.

The real Opposition Leader had also written to Mr Barr urging the same thing, but she slipped well below the radar.

That’s where Elizabeth Lee is happy to stay so far during this lockdown, confining herself to constructive Twitter posts and not getting mired down in a pointless political battle over what measures the government is taking to curb the virus.

It’s a far cry from the regular attacks on the government last year from her predecessor Alistair Coe, ranging from the woes of homeschooling to the impact of restrictions on business.

With Mr Barr always pointing to the health advice and stressing his job was to keep Canberrans safe, Mr Coe was on a hiding to nothing trying to meet his job description.

Unfortunately for him, he often came off second best in a case of diminishing political returns.

Granted, this time the situation is much more serious with actual cases and NSW a basket case, but Ms Lee seems not about to make the same mistake, judging rightly that until it is worth having a say, she will tread a low-key, responsible path that keeps her in touch with Canberrans and out of controversy.

It’s a course she has set from the beginning, not necessarily avoiding a fight but choosing her battles as she steers the Canberra Liberals to the centre and to territory on which they may actually attract more voters.

There has been a noted toning down of rhetoric and a deliberate and pragmatic focus on bread and butter community issues and away from the divisive social issues that Mr Coe seemed attached to.

She even launched a party strategy on education in the ACT that highlighted key concerns many parents would share and provided a constructive response.

Deserved or not, the Canberra Liberals had lost credibility as an alternative government, and that’s what Ms Lee is out to reclaim. Remember, it is a long way out to the next election in 2024.

Ms Lee knows that she would be receiving the same advice that the Chief Health Officer and ACT Health are providing to Mr Barr, and unless she wanted to do a Gladys, whose fate I doubt will be kind, then there would not be much difference under her to what we are experiencing now.

Only expect Ms Lee to rise, stateswoman like, if the ACT Government happens to slip up and deserves a ticking off, more in sorrow than in anger.

Staying out of the fray is good politics and will serve her and the party well.

Just as Zed’s ACT forays are good politics for him, or at least maintains his public profile, as he faces an election probably next year.

Not that he has too much to worry about, unless the Prime Minister’s pandemic performance still sticks in voters’ minds by the time they get to the ballot box.

The last thing we need, now especially, is for the Liberal Party to move further to the right under the influence of religious and other extremists.

The Taliban are in Afghanistan, not Canberra.

Elizabeth Lee’s lockdown strategy is a winner? You are one baffling dude Ian! The ACT government and its medical profession are doing their ultimate best to tackle this latest outbreak. Unfortunately, Gladys and John Barilaro have discovered an escape route to blame ACT’s government and its residents for NSW’s lack of leadership with no sign of getting out of the predicament it currently finds itself in. Meanwhile Zed and Elizabeth Lee are undermining the ACT government’s path forward and attempting to pressure them into ease restrictions to let the workers onto construction sites so that their business owning mates don’t suffer. I haven’t seen anyone in the Canberra Liberals coming forward to offer assistance and support for the ACT government and its residents.

“ease restrictions to let the workers onto construction sites so that their business owning mates don’t suffer’ – not mates – try family!!

@ChrisInTurner Agreed – not a good look for the Opposition Spokesperson on Climate Change, who has previously stated her support for climate action. If it was an unwitting error of judgement she needs to address this.

Chief Nanny Gladys doesn’t like to be ignored and has imposed a 9pm to 5am curfew on the naughty girls and boys in Sydney. My gut feeling is that the populace will soon have a gutfull of finger-wagging politicians and will turn on those who are flouting their new found powers and austerity measures. A good opposition is essential to hold any power abusing government to account and will gain support if it promises a return to normality and an end to coercive policing.

Why did she associate herself with the Young Liberals promotion of coal? That is not a good look for the average Canberran.

Yes, credit to Ms Lee for her responsible conduct in a national and local emergency, unlike her federal colleagues who continue to act as if running for office with the Young Liberals.

Yet again Ms Lee proves the Libs have finally found a credible alternative Chief Minister. Now if only she can find a way to get Zed to stick to matters federal and to stop undermining her.