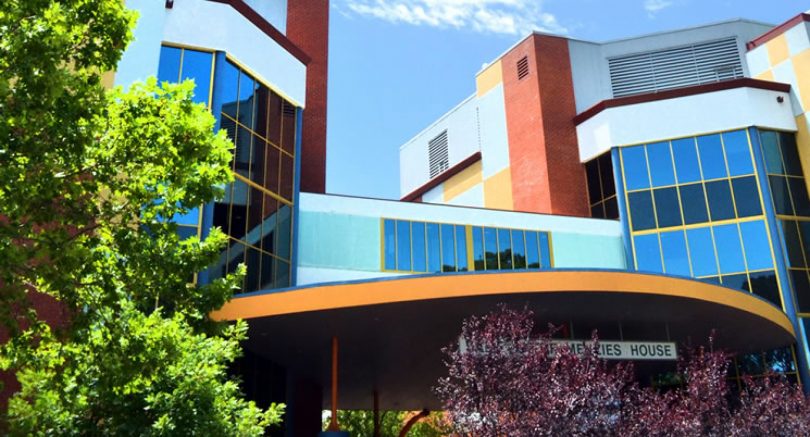 The owner of Dame Patti Menzies House in Dickson plans to redevelop the site into a six-storey mixed-use development after trying to offload the building earlier in the year.

Merrylin Lindland Pty Ltd bought the former ACT Government office complex in 2017 for $15 million but put it on the market in February.

The two interconnected office buildings at 16 Challis Street opened in 1997 and when sold the government had a three-year lease on the two buildings which house the Environment, Planning and Sustainable Development Directorate.

The lease expired last month, but it did have two additional one-year options.

According to the project website, Cox Architecture has devised preliminary plans that show a six-storey plus attic modern building wrapped around an internal landscaped atrium that continues towards the eastern side of the development.

It says Merrylin is aiming to transform Block 19 and 20 Section 32 Dickson into a vibrant mixed-use development including ground floor retail and upper floor residential apartments, in line with the City Renewal Authority’s visions for the Dickson Group Centre as set out in the Dickson Place Plan. 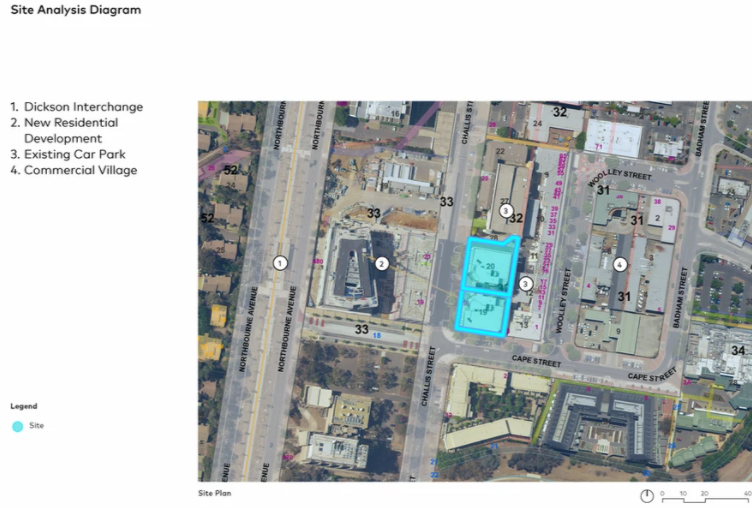 The website says the ground floor retail together with a proposed pedestrian link to the north of the site, consistent with the Dickson Precinct Code, will contribute to the activation of the public domain and enhance the human-scale experience of the building from the surrounding streetscape.

The central atrium and the landscaped eastern court will provide light for the dwellings while ensuring cross-ventilation for resident comfort and reduced energy consumption.

Cox’s plans show a green east-west link across the north of the site between Cape and Wooley Streets, that allows for a footpath, deep-rooted tree plantings and provides a generous setback for seating and outdoor dining.

The ground floor fronting the pedestrian link on Cape and Challis Streets would be activated by commercial and cafe tenancies, and a residential lobby.

The Dickson shops are only a short, 100-metre walk to the east and Dickson Light Rail Interchange is a convenient 200 metres away on Northbourne Avenue.

The site is zoned CZ2, which allows for a variety of uses including commercial, residential and retail, and the Dickson precinct code allows for buildings up to six storeys high.

City Renewal Authority interim chief executive Gary Rake said at the time of sale that the 3.5-hectare site would be a fantastic urban renewal opportunity after the ACT Government lease ended.

The sale was part of the Commonwealth Government’s Asset Recycling Initiative which provided a 15 per cent bonus to the ACT Government on the sale of ageing public infrastructure, and contributed to the development of light rail.

The proponent is conducting a drop-in information session on 25 November between 5:30 pm and 7:00 pm at the ground floor of Dame Pattie Menzies House.