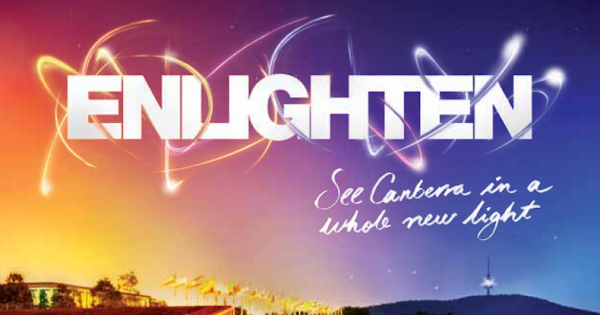 Andrew Barr’s office have released the event report on the inaugural Enlighten festival.

The total attendance figure was 8678, which includes multiple visits by attendees, as well as complimentary, promotional and VIP entries. Based on survey data, 64% of attendees were from the ACT, 36% were from interstate and 1% was from overseas. This correlated with Ticketek’s ticket sales postcode report, which indicated 63% were from the ACT, 34% were from interstate and 2% were unknown. The top source of interstate visitation at the event this year was Sydney and Regional NSW (28.1%), followed by Victoria (3.4%) and Queensland (1.5%). Some 49% of attendees identified that they first heard about ENLIGHTEN through stories in the media (with newspapers ranking highest), while 21% first heard about the event through family, friends or workmates.

A total of 2415 interstate and international visitors (unique visits) came to Canberra specifically to attend ENLIGHTEN or extended their stay because of it; and of that total, almost two-thirds (65%) stayed for one or more nights in the ACT. The average length of stay for interstate overnight visitors who came to Canberra specifically to attend ENLIGHTEN was 1.6 nights. Of the interstate and international visitors surveyed, 47% indicated that they also visited other venues/attractions during their stay. Among the responses, the Australian War Memorial and Parliament House were the most popular.

In terms of how ENLIGHTEN affected perceptions of Canberra, 57% of attendees surveyed viewed Canberra in a more positive light as a result of the event; while 41% indicated no change in their overall perception of Canberra. Attendees were also asked about their interest in a number of possible elements for inclusion in future ENLIGHTEN events. The elements that created the most interest were ‘lighting effects on additional national attraction buildings’ (87%), ‘a nightglow display from multiple hot air balloons’ (84%), and ‘additional national attraction partners featuring late night activities’ (80%).

We all have to start somewhere but that seems like a lot of public effort and expense for something the hotels could be putting on for themselves.

UPDATE: Andrew Barr is rolling it in glitter:

While the ACT Government would have liked to attract higher numbers in the first year, we understand there is generally a five year development cycle for building-up these sorts of events. This certainly was the case with Floriade which had humble beginnings but has now grown into Australia’s premier spring event.

It would have been more popular if the concerts weren’t outdoors in crap weather – such a wrong time of year for outdoor anything. Pity…

I don’t really give a crap other than to question why the accompanying artwork looks so much like something you would see advertising an evangelical/born again church.

Hang on – where is the breakdown? How many paying visitors, as opposed to free tickets?

So the festival contributed $0.3 million net to GDP? Or 0.9 million? Not clear.

8678 visitors – “including multiple visits” – how many multiple visits? If that isn’t broken down with unique visitors, how have they arrived at the figures for interstate visitors? Do those include repeat visits too?

The advertising budget was huge – I saw massive, one-page ads all over the major metros. NO WAY was only $ 0.6 million spent by the ACT. How much did the promotional visits by INXC or whatever they are called, cost? They arrived by helicopter.

How many of the “interstate and regional” visitors were from Queanbeyan, Yass, Bungendore and Braidwood? The figure of 2145 interstate visitors is simply appalling! How many of them were from just across the border and didn’t stay in hotels?

A turd rolled in gold dust.

Footnote: last week I was phoned for a random survey of ACT events, holidaying, tourism etc. No mention of Enlighten. Interesting that Enlighten was left off the survey. Why?

Portia Yeung - 2 hours ago
In that case you should keep your comment to yourself and just shut up. Did you get paid by Geocon to stick up for this money... View
John Elliott - 3 hours ago
John Canevski .... Geez I am glad to see a real man on Facebook just saying it like it is. Ha ha ha 😎😎😎😎 View
John Elliott - 3 hours ago
I live within 100 metres of the Establishment and I don't see a problem. So many people are whinging and complaining. The bui... View
Food & Wine 135

Gerard McMahon - 5 hours ago
How about building a new Kings Hwy like we have needed for many years. Bypass Bungendore and Braidwood and save the trees? View
Jesse Clarke - 18 hours ago
So that'll be nice and windy through there once them trees are gone it will look like barron land just leave the things alone... View
Robbie Munday - 18 hours ago
I am assuming they will be replacing them with saplings BEFORE they cut the old guard down? View
Sport 15

John Elliott - 11 hours ago
In these circumstances YES it is worth watching. View
James Strang - 12 hours ago
A packed house adds so much to the game, almost regardless of whether you're there or watching at home. Will certainly be wat... View
Ben Jones - 12 hours ago
It will be like watching a Brumbies game from last season then ..... View
News 8

Lynn Stape - 12 hours ago
I believe the rationale was the size of the venue which automatically set how many could be in that venue... It isn't like a... View
News 9

Guy Manton - 12 hours ago
Don't know why she claims she doesn't fit into standard liberal party box. All her positions are the exact same as the existi... View
John Moulis - 14 hours ago
I've been a lifelong supporter of the Coalition parties but after reading this I now go on record as saying Vote Labor. View
Monty Ki - 18 hours ago
We really need to be voting for progressive, inclusive and evidence-based, rational and logical politicians. While they are f... View
News 31

astro2 - 14 hours ago
The problem with not having any residences there, as part of the overall plan, is you end up with a dead (and creepy) space a... View
News 23

Max Leonard - 14 hours ago
That is ridiculous. The Sydney Melbourne air corridor is the second busiest in the world. Of course we need HSR. The Grattan... View
News 20

Ben Garden - 19 hours ago
Lol. Come on. With the trend upwards of temperatures this will never be viable. Snowfall levels in Australia are already marg... View
Angela Van Dyk - 22 hours ago
I hope there will an open air ice skating arena ⛸⛸⛸ View
Food & Wine 6

Kathryn Ross - 20 hours ago
Kayla Hammond we need to go back there! View
show more show less
*Results are based on activity within last 7 days

@The_RiotACT @The_RiotACT
Hard-hitting rockers Charlotte & The Harlots are performing for Live In Ya Lounge this Friday. Find the details in our latest #GigGuide, out now https://t.co/3rU1bTwzaC (3 hours ago)

@The_RiotACT @The_RiotACT
This week we're asking about the ACT's new frontline services assault laws. The offence appears on criminal records, but the sentence is the same as common assault. Is this enough when frontline service providers risk their lives? https://t.co/KxEeYCpznE (4 hours ago)