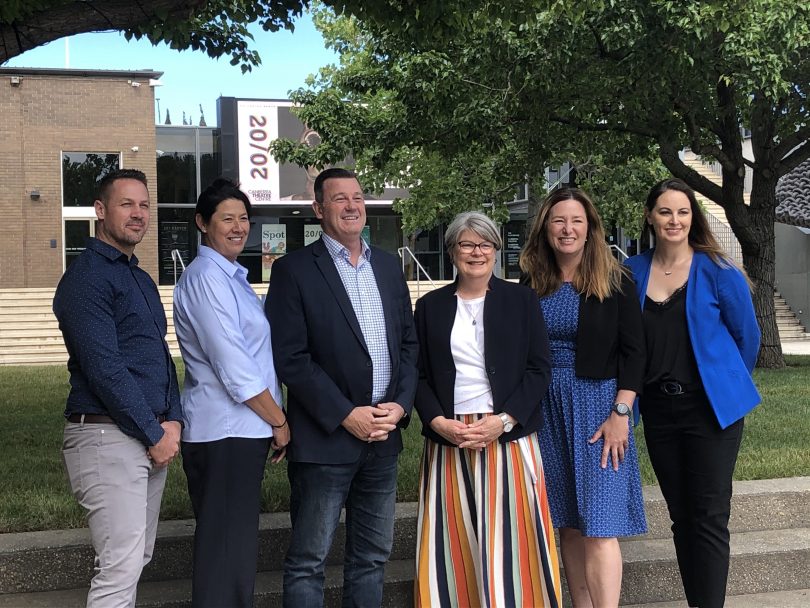 Gender equality on Canberra’s sporting boards is on the horizon with 28 government-funded organisations on track to reach a 40 per cent female representation benchmark by 2020.

The government has offered associations the incentive of a 10 per cent funding bonus, or around $5000, to achieve that benchmark by next year.

Minister for Sport and Recreation, and Minister for Women, Yvette Berry said about half of the 28 ACT sporting bodies that receive government funding were already there.

“We’ve got momentum in this country now with gender equality and making sure that women are rightly represented on sports boards,” she said.

“[Women are] more than 50 per cent of the community and that representation brings diversity and innovation to the work of sports communities, but it also gives women and girls the chance to see women represented on their peak sports bodies as well.

“It’s a really important message to women and girls, particularly young girls in sport about where they could be one day.”

Ms Berry said 40 per cent gave near-equal representation of women on many sporting boards, as many are odd-numbered, with seven or nine board positions.

Capital Football is employing a 4-4-2 formation on and off the pitch with chair and director of the board Fran Sankey telling Region Media that the organisation is committed to having 40 per cent male representation on the board, 40 per cent female representation, with 20 per cent remaining unallocated to any particular gender.

Both the Capital Football and Tennis ACT boards have a three, four board split favouring men, with a female CEO or Chair.

“I think tennis was the first sport that there was equality pay for participants at an elite level, so these are symbolic things in some ways because we’re talking community sport here but it really makes a difference,” says Tennis ACT board director Robyn Hendry. “So I’m proud to be associated with tennis, particularly as a female director.”

CEO of Volleyball ACT Adam Castle has commended the sport for having the most equal representation of men and women by participation rates, which is reflected in the board’s makeup, consisting of three men and women.

Ms Berry says help is available for organisations that may be struggling to reach equal representation by 2020, including accessing the ACT Government’s diversity register which can help organisations fill vacant positions.

“We’re going to work with those sports groups,” she said. “Some of it’s just about when they’re having their board elections and timeframes, and maybe the make-up of the statutes of their organisations.”

If they are “inching” towards gender equality, it probably means there are some tangible benefits to being on these things.

If it’s jobs for the boys, it likely means they are full of ALP members getting a perk.

So...we're no longer appointing people based on skill and merit......wow...who knows how many genders there are? Last count was 36+....

Must be a pretty hollow feeling getting a job because of a quota rather than earning it...

I assume ‘equal gender representation’ in the fields of nursing and midwifery should be next then?

So which of them are actually the best people for the jobs and which are there to meet some "equality" target?

How do they tackle transgender persons or non binary

How is the ACT government going to address gender fluidity and equality for other genders? If they can teach it to kids through the education system, surely it would be easier for them to address the issue within their own policies.

Did they get there on merit or to meet a quota? If women are the majority why do you need to help them as a minority?

Because of unconscious bias.

aussie2 - 2 hours ago
Here is another for the "shopping list". It is government responsibility to ensure its citizens have access to pools and othe... View
2902 - 5 hours ago
Imagine the money one could make building apartments on this site, right out the front of the proposed light rail track View
ChrisinTurner - 5 hours ago
There is not enough attention to maintaining services in areas with dense populations. The government seems to be working on... View
Opinion 75

Naimad Doowneerg - 2 hours ago
Bernard Miller not sure what you mean by "shear (sic) volume of adverse events and deaths". According to the TGA There have b... View
Garvin Francis - 3 hours ago
Nada Krstin So here’s totally what wrong with this whole anti vaxx, anti mask, anti lockdown argument. Its not about believ... View
Deborah Gale - 9 hours ago
Nada Krstin The vaccine gives protection and greatly reduce the likelihood of serious disease which is great. But children wh... View
Opinion 2

estelle3724 - 4 hours ago
I would like to ask Ms Castley what more she wants the government to do for business. She never mentions that business receiv... View
News 6

phydeaux - 4 hours ago
Rather my point, JS9. “…without qualification”. With significantly different individual circumstances, to give an answe... View
Kathy Blunden - 5 hours ago
I was also totally shocked with my electricity bill. It is the highest bill I have ever received and I have solar panels!!!... View
JS9 - 6 hours ago
It is a weighted average across a range of plans - so it means some will go up more, some go up less. Over the basket of plan... View
News 12

lexyliz - 10 hours ago
Does anyone know what happened with this case? A friend mentioned it yesterday as we are planning to send our son to this cen... View
News 8

Capital Retro - 11 hours ago
The next high impact bushfire that will rip through Canberra will be in about 20 years so there should be plenty of time to r... View
show more show less
*Results are based on activity within last 7 days

WARNING: This story may distress some readers. 'Pindar' the peacock is the latest to be struck by a car on...
Sport 139

Paid parking in Canberra has been a magnet for controversy and will continue to be so into the future with...

@the_riotact @The_RiotACT
The @ainslie_fc has big #redevelopment plans and the first step is a change to the Territory Plan https://t.co/T9Kcushdi3 (39 minutes ago)