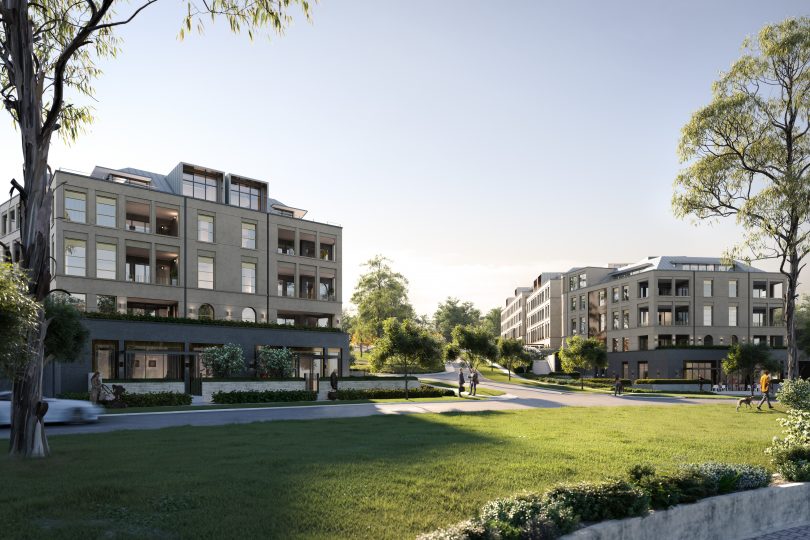 A render of the proposed development on Discovery Street. Image: Doma Group

The first apartment buildings proposed for the former Red Hill public housing site have been designed in the style of townhomes found in London, Paris and Madrid, according to twin development applications for the project.

Canberra developer Doma, which last year bought the 53,000 square metre precinct with Stockland for $50 million, has lodged plans for a total of 136 dwellings across six blocks bordering the central Lady Nelson Park, including areas that will be pedestrian thoroughfares.

Known as ‘The Parks’, the $66 million project, designed by Stewart Architecture, has been split into two development applications of 68 apartments each within four storeys plus an attic, with two levels of basement parking.

The proposal provides a mix of one, two and three-bedroom apartments and the plans say the buildings are designed as a series of ‘town homes’ which step-up the slope and provide address to all streets.

The detailed and varied facades are unlike typical apartment buildings and balconies are recessed to optimise privacy and allow use of outdoor space in all weather conditions, the plans say.

“Additionally, the typical flat roofs of apartment buildings are avoided to provide an attractive and intriguing roofscape of attic apartments including recessed balconies and dormer windows. These roofs also conceal plant and equipment,” the plans say.

Each building has pedestrian access to the shared lobbies and gates to private courtyards with pergolas set behind hedges.

The DA says the dwellings are generally larger than typical apartments with well-proportioned balconies and terraces, and a high proportion of three-bedroom apartments.

There is a building height limit of 16 metres, which the proposal on average meets but the DA says that due to the topography the limit is exceeded in some locations as the buildings step-down the fall of the land. 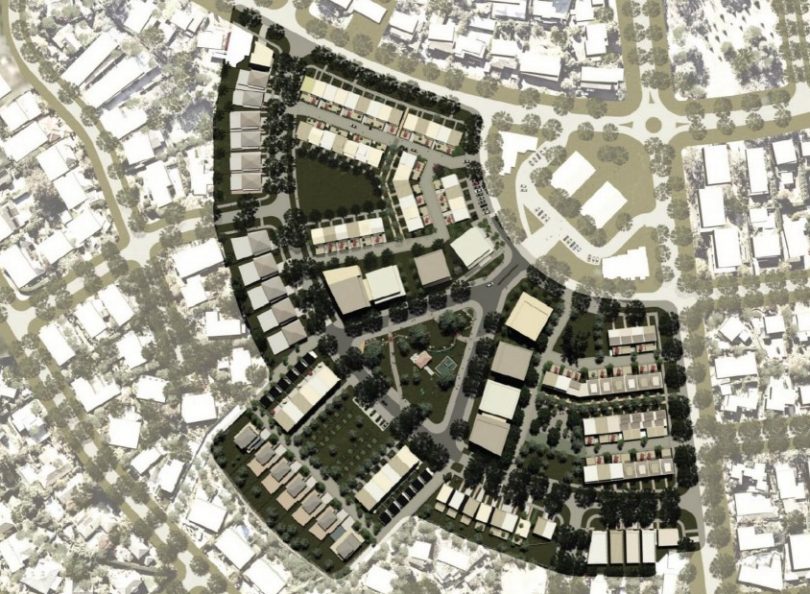 The Estate Development Plan for the Red Hill Precinct. The proposed four-storey apartments are set on opposite sides of the triangular Lady Nelson Park.

They are near the Red Hill Shops (CZ4 Local Centre) and separated by Lady Nelson Park, one of six public open spaces within the precinct.

The DA says the development is designed to direct residents to engage with their surrounding environment, including Lady Nelson Park, the local shops, and the park network to east of blocks 2 and 3.

Semi-mature deciduous trees will be planted, with 16 per cent of Blocks 2 and 3 dedicated to planting, with the body corporate maintained planting outside the boundary increasing the total area to 24 per cent. Thirty-one trees are planned.

For Blocks 5 and 6, 20 per cent is dedicated to planting, increasing to 26 per cent when the body corporate area is taken into account, with 34 trees.

The DA says the development will cut mains water consumption by 40 per cent compared to an equivalent development constructed in 2003, through the use of water-efficient fixtures and appliances.

The basement parking provides 134 and 142 spaces respectively, as well as one secure bicycle space per dwelling for residents in basement storage cages or individual basement garages. Eight visitor bicycle parks are provided on-site.

The proposed development changes vehicle access locations from those proposed in the EDP, with the two sites each to be serviced with a single combined driveway connected directly to Discovery Street requiring the establishment of the right of way easements in favour of Blocks 2 and 6.

The DA says traffic through the overall estate will be reduced as a result of more direct access to the surrounding road network, and the removal of driveways from Lady Nelson Place will provide an unbroken pedestrian path, improving the amenity of both the verges and the Park.

‘No parking’ restrictions are proposed for the northern side of Discovery Street fronting the sites to ensure clear access for waste removal and residents.

How sad that hundreds of public housing dwellings and hundreds of public housing tenants were kicked out of the amazing suburb of Red Hill and sent off to the outer suburbs to a life without public transport, employment opportunities and support facilities.
Kicked out, Just to make a developer rich and give the ACT Government some short term funds to fritter away on frivolous promises.

A new ticketing system is on the way for Canberra's public transport network, promising passengers a variety of flexible payment...
News 111