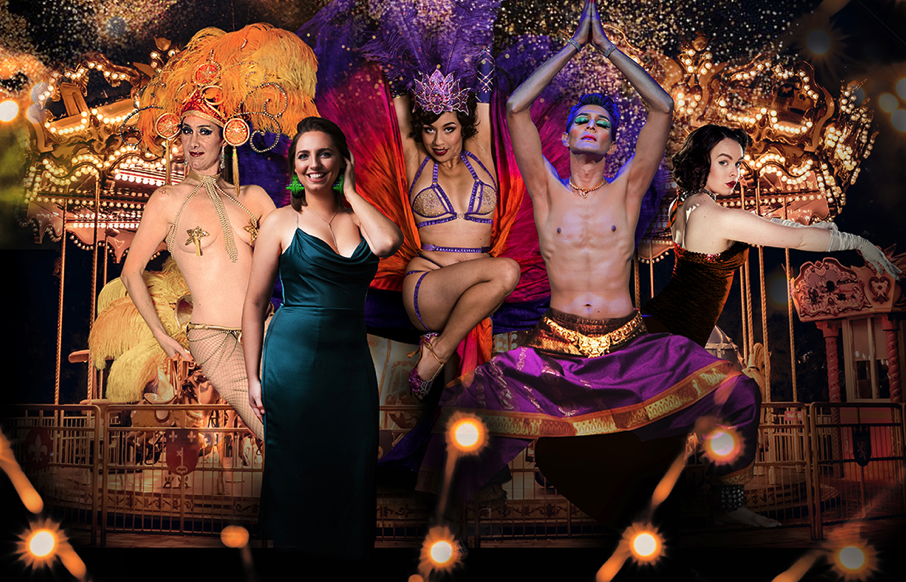 Australia’s globetrotting legends of cabaret, variety and burlesque, Finucane & Smith, are chasing COVID cobwebs away with a national tour of their smash-hit, sell-out celebration Finucane & Smith’s Travelling Dance Hall and Tuggeranong Arts Centre is the next stop!

This is a cabaret like no other, jam-packed with world famous songbirds, disco divas, and dancing stars, local legends, burlesque twirlers, and go-go groovers.

From glittering Indian dance to eye popping burlesque and breathtaking opera, this Dance Hall has something for everyone, all draped in lush velvets plus drinks at the bar!

After 2 years of brain-numbing zoom meetings, closed borders and empty theatres, 50 communities from the Pilbara to Darwin, Hobart to Karratha put up their hands to join the fun, celebration, eye popping acts and twinkling lights of Dance Hall.

Local artists are jumping on board, town halls and grand old theatres are draped in festoons and velvets, and everyone is dancing in the aisles.

Finucane & Smith’s cabarets are known world over for their provocation and entertainment.

They include a lush mix of riveting artists, artforms, cultures, influences and irresistible music that have garnered acclaim in 15 countries, winning 13 awards including:
– 4 Green Room Awards
– Outstanding Contribution to Cabaret
– The Golden Potato (Bellarine) and the
– International Theatre Institute’s CHAMACO Award for International Presentation of the Year (Cuba).In

International cabaret star and creator of Dance Hall, Moira Finucane, says: “We’ve taken breathtaking variety, jaw dropping dance and irresistible cabaret all over the world, to 15 countries of standing ovations and international awards. But one of the greatest loves for our company is swinging into a regional town, meeting the amazing locals, and shining a light on local artistry of all kinds. It’s always fun, wild, moving, and we always leave with new friends in our lives, and a promise to return. Well, we are coming back!

Maude Davey: This year’s recipient of the Melbourne Fringe Living Legend Award, Maude Davey, is heading up the Canberra leg of the grand travelling Dance Hall when it rolls into Tuggeranong at the end of November to present four nights of eye-popping cabaret. A trained actor from VCA, Maude has worked as an actor, director and writer for over twenty-five years. Her primary focus is creating new work. She has worked extensively in variety as a member of Finucane & Smith’s Glory Box, Burlesque Hour and Travelling Dance Hall and recently in her award-winning outfit, Retro Futurismus. She works as an actor in theatre, television (Offspring, Summer Heights High), and film (My Year Without Sex, Noise). She has also been the Artistic Director of two small theatre companies (Vitalstatistix Theatre Company in Adelaide and Melbourne Workers Theatre). Her recent directing credits include KillJoy with the laserbeanz and Fish for the Rollercoaster Ensemble.

Chris Burgess: Chris is a Naarm based cabaret artist, professional music theatre performer and a practicing yoga teacher. A graduate from Showfit and VCA Music Theatre with a bachelor’s degree plus Honours, Chris recently toured in ‘Do You hear The People Sing’ which played at the Sydney Opera House and Melbourne Arts Centre. He also recently performed with Meow Meow and the MSO at Hamer Hall in ‘Meow Meow’s Pandemonium’, starred in his highly successful self-devised cabaret ‘LENNOX: Legend In My Living Room’ which toured Chapel Off Chapel in 2021/22 and the Palais-Hepburn 2022. He regularly performs as a member of Finucane and Smith’s ‘Dance Hall’.

Bede Nash: With 13 years of gymnastics training, Bachelor of Circus Arts from the National Institute of Circus Arts (NICA), Bede Nash is an award winning circus performer. Bringing a unique world class blend of acrobatics, hoop manipulation and sassy looks to the stage. He enjoys the thrills and gravity defying nature of circus arts, as well as the connection between performer and audience. Bede performs with a captivating sassy, energetic and award-winning style. Having performed across Australia, and the world, even for King Charles and Camilla, he combines fast paced juggling, tumbling, and a killer smile with a dazzling on-stage persona, and a cheeky wink

Jazida: Cabaret lightning rod and burlesque superstar, Jazida is renowned for her rapid fire, electrifying performances stampeding across magic, burlesque, fire-eating, sword dancing and fan twirling. She has astonished audiences across Australia. Voted in the global top 50 of burlesque’s most influential artists, her company Jazida Productions has opened an alternate performance hub in Canberra, Flazéda, which runs packed out classes live and online celebrating the moving beauty of every single body and winning Canberra Local Business Awards for Outstanding Performing Arts.