Public Lecture: The place and role of Russia in the modern world 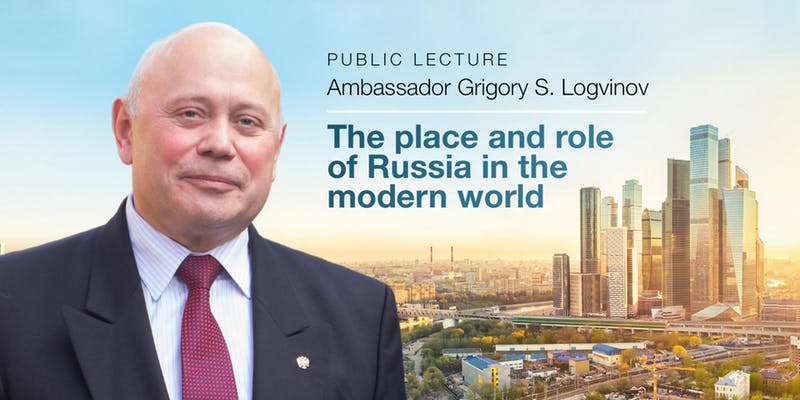 The place and role of Russia in the modern world

Ambassador Logvinov will share the Russian perspective on the changing nature of the current world order. He will touch upon important issues of the so called “rules-based world”, and the East-West relationship, especially between Russia, the USA, and China. He will detail Russia’s contribution toward achieving international peace and global and regional stability.

His Excellency will also look back at the historic events of the 1938 Munich Agreement that represent a classic example of the potential impacts of disregarding international law, believing in one’s own exceptionalism and infallibility, and reliance on national egotism.

Ambassador Logvinov will be open for any questions including the most acute, sensitive and uncomfortable.

His Excellency, Grigory S. Logvinov, is Ambassador of the Russian Federation to the Commonwealth of Australia.

In 1979 he graduated from the Institute of Asian and African Studies of Lomonosov Moscow State University and joined the diplomatic service. Between 1987 and 1993 he progressed as the third, second, and first secretary of the Embassy of the USSR (then – Russian Federation) in China, before serving as the office director for China.

Between 2008 and 2016 he served as the special envoy for North-East Asia Security for the Ministry of Foreign Affairs of the Russian Federation and was the Deputy Head of the Russian delegation to the Six Party Talks.

He holds the diplomatic rank of Ambassador Extraordinary and Plenipotentiary.

Ashley Wright - 13 minutes ago
Darlene-Rose Strickland winter in Canberra is actually the driest months. Spring followed by summer are the wetter months. View
Kevin Stockton - 4 hours ago
Imants Ezergailis haha...let the keyboard warriors complain - the truth hurts View
Jackie Fuller - 5 hours ago
Andrew Dudley how do you figure that out 🤦‍♂️... View
Sport 8

Celebrating the role of Co-operatives in our Community