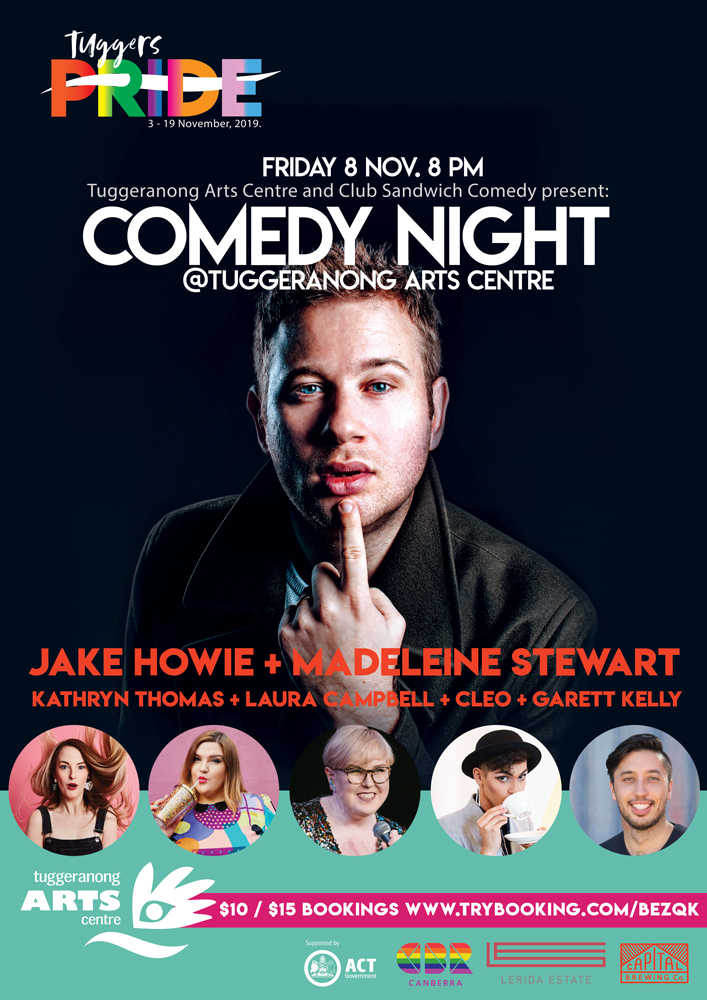 Celebrate PRIDE in Tuggeranong with some of the best queer comedians from the ACT, Australia and the world.

Headlined by Kiwi comedian Jake Howie, who got his start in the thriving comedy scene of London and was winner of the 2015 Reading Comedy Festival New Act of the Year.

Tickets are $10 students and $15 adults online.

All tickets at the door are $20. Students must present valid Student ID at the door on the night and those aged 15+ must be accompanied by a responsible adult.

Jake Howie is a Kiwi comedian who got his start in the vibrant comedy scene of London, performing regularly at some of the world’s best clubs including Top Secret Comedy Club, Komedia and the Glee Clubs. Jake won the Reading Comedy Festival New Act of the Year competition in 2015 and placed as a finalist in the prestigious NATYS Awards, and went on to take his debut comedy hour Let Them Eat Jake to the Brighton Fringe, Edinburgh Fringe, Leicester Comedy Festival, Melbourne International Comedy Festival and a sell-out weekend run at The Classic in Auckland. Jake has been heard on BBC Radio 4 Xtra, Talk Radio and the popular Global Pillage podcast, as well as being seen on BBC One and TVNZ.

“Honest, hilarious and raunchy – Jake Howie is the business!” MSN.com

“Jake is 10 comedians in one man” – Sara Pascoe

Laura Campbell comedy is a mix of old meets new. She may have the face of a 12 year old but she has the soul of a 45 year old divorcee one rose glass away from joining a CIT glassworks class. Taking on the comedy world with her brand of honest and absurd storytelling, Laura will have you laughing about everything from hip replacements to handmaid’s tale.

Kathryn Thomas has performed all over the country, transitioning from theatre into comedy. Photo: Supplied.

Kathryn Thomas is a stand-up comedian who has been performing all over the country for the last year, including the Cafe Lounge, The Comedy Store and Melbourne Town Hall. Kathryn is originally a theatre performer who has recently transitioned into comedy. She recently opened for Becky Lucas, Chris Ryan and Cameron James for the Sydney Comedy Festival. Kathryn is a 2019 RAW National Finalist for NSW and her queer, relatable and boisterous charm has her climbing the ranks of Australian comedy.

Cleo is cheeky, charming and only a little alarming. Photo: Supplied.

Say hello to Cleo, your soon-to-be favourite mixed-raced, cross-dressing, Sydney-based Queer comedian! She’s performed in shows across Australia from Mardi Gras to Comic Con as well as producing her own shows such as the online podcast adventure, Dungeons & Drag Queers to Kweens of Comedy, a monthly comedy night celebrating Australia’s Queerest and dearest. She’s cheeky, charming and only a little alarming and she can’t wait to meet you!

As seen on Tonightly’s NDIS Fails, Madeleine Stewart is a Sydney based comedian who reflects on life as a disabled woman in an able-bodied world. Her quick wit and charmingly wicked humour allows her to explore uncharted territories regarding disabilities and social etiquette. Madeleine has worked with comedians such as Adam Hills and Andrew Denton and has performed in the Sydney Fringe and Comedy Festivals.  She is also the producer of a kick-ass accessible comedy night Crips & Creeps.

Garrett Kelly is an up and coming comedian from Canberra. Photo: Supplied.

Up and coming comedian Garrett Kelly is a familiar face at Tuggeranong Arts Centre. Garrett danced with Fresh Funk through his teen years before undertaking full-time dance in Sydney. He now performs frequently in musicals across Canberra such as High School Musical, The Wedding Singer, Wicked and Kinky Boots. In 2018 Garrett starred in Channel Seven’s competition and reality TV show ‘Dance Boss’, where he was part of ‘The Public Servants’ and worked with choreographers such as The Squared Division and Matt Lee.

In November, TAC will celebrate PRIDE in our community with a specially curated series of events, performances, and discussions by LGBTIQ artists to coincide with Canberra SpringOUT Pride Festival and Tuggeranong’s community festival SouthFest. From music to comedy, cabaret, literature, poetry, ideas and more, this program will bring together some of the best and brightest LGBTIQ artists in Australia alongside Canberra’s own Queer* stars.

Sean Nicholls - 9 hours ago
I have leave that day! I'm in. View
Lindsay Burrows - 10 hours ago
Lisa Couacaud fine. I’ll drink for both of you View
Lisa Couacaud - 12 hours ago
Kate Sullivan but practice makes perfect View
News 11

A full program of music, comedy & cabaret for Spiegeltent Canberra 2018

@The_RiotACT @The_RiotACT
The Deloitte Access Economics Business Outlook for December calls the ACT the "little territory that could", defying the national downturn and recording its largest ever share (2.2 per cent) of the national economy https://t.co/laaQ27fmrv (36 minutes ago)