Evidence of witches on Mt Ainslie? 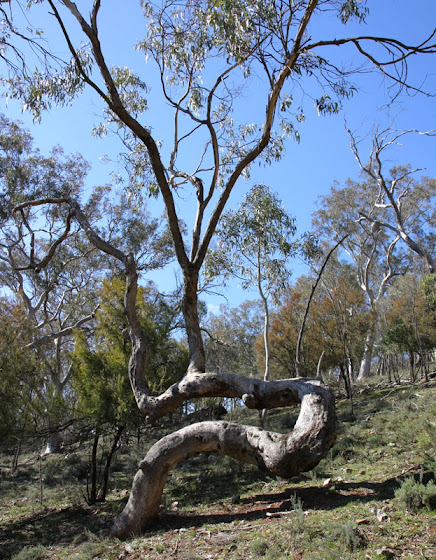 John of Campbell has sent in the above with this note:

Is this Canberra’s weirdest tree? Mount Ainslie, not far off a well-used track. Would love to know how it managed to contort itself into such a shape.

Any theories beyond our friends in witchcraft?

(Got an image of Canberra you want to share with the world? Email it to images@the-riotact.com )

12 Responses to Evidence of witches on Mt Ainslie?
Filter
Showing only Website comments

“In the past Pr Daniel has had many prophetic dreams from the Lord which have come to pass. Following are a few of them.

1) In Saudi Arabia he had a dream – Approaching the King of Saudi Arabia to get permission for Christians to worship in their homes. This became a reality when it happened through some members of the British government led by Pr Daniel in 1996.

2) Then in 2000 in Ethiopia he had the dream of the Vilification Laws in Australia, which became a reality in 2002.

4) A few months after Kevin Rudd was elected in 2007, he had a dream of Julia Gillard back stabbing him and taking the place of PM. This came to pass in June 2010.

5) Last Friday 27th Aug 2010 in Canberra he had a dream of Julia Gillard giving her final speech as PM, conceding defeat, and then he heard the words ‘it is finished’. On Saturday and Sunday at the services in Canberra Pr Daniel shared his dream with the congregation and prayed for the new government.”

No wonder Danny Nalliah and his crew had their “cleansing rally” on top of the mountain.

By the way, they were back in town this weekend. (not stalking him, just using the Google…)

Evidently when in town he does a tour of the area, visiting as a prophet for profit.
http://thenewconnectionchurch.com/

It’s a tree. They are not all identical. This is nothing new.

No wonder Danny Nalliah and his crew had their “cleansing rally” on top of the mountain.

Still not contorted enough to get the backing of the key independents.

This tree has less backflips and twists than the liberals.

Witches…. looks more like Uri Geller has been walking the trails on Mount Ainslie.

The question needs to be asked. Why would a witch do this to a tree?

Maybe there was another tree growing next to it for many years?

government tree works at the time forced it into a detour?

Looks like a swinging voter to me…… I know I know bad joke.

Anthony Briscoe - 17 minutes ago
Michael Wilson he is a brick wall View
Cleve Gabriel - 5 hours ago
Can’t see it happening ,he’s there for as long as he wants unfortunately. The shame of it all is that represents himself... View
Penelope Farnsworth - 6 hours ago
It tends to be hard to shift the one Labor one Liberal Senate pattern for the ACT View
Lifestyle 4