Geocon’s latest Canberra CBD development proposal has sparked concern from nearby residents about overshadowing, loss of views and the potential for traffic disruption on a common access road.

The Forum Apartments Owners Corporation is also upset that the public consultation for the 357-apartment Allara Street proposal included the Christmas-New Year period and that there was insufficient information about the project.

Last week the chair of the corporation’s executive committee wrote to Purdon, Geocon, the National Capital Authority and the ACT Government with their concerns about the potential impact on the “quiet enjoyment and amenity” of the five-storey Forum Apartments’s 117 residents from the three-building development which may be up to nine storeys.

The corporation has hired consultant Tania Parkes to take up their cause and she welcomed the extra consultation session.

Ms Parkes said the residents always knew there would be development nearby but expected more consultation and information to be available before a Works Approval went to the NCA.

She said a section of the Forum Apartments facing London Circuit would be overshadowed on the afternoon of the winter solstice according to the proposal’s shadow diagrams and some residents would lose their views of the lake and Brindabellas, adding that a view corridor analysis had not been done.

Another view of the Allara Street project.

Access to the new development is limited to a common driveway off Allara Street that is meant to service the entire complex, including ground floor shops, cafes and restaurants.

“The reason for this is that London Circuit is being raised and therefore the NCA do not want any entry or exit on to or off London Circuit,” Ms Parkes said.

“The residents are concerned about a logjam there, and they haven’t seen any parking or traffic studies to be able to give informed comment.”

Ms Parkes said that while the proposed 15-metre setback between the two sites was welcomed, there were concerns that the new residents would be able to see into Forum apartments opposite, although Purdon says the separation will prevent this.

She said it was important that matters were resolved during consultation because the residents could not appeal to the ACT Civil and Administrative Tribunal as designated land came under NCA authority.

Purdon says the complex will have rooftop and ground-level gardens and a shared landscaped plaza, as well as food and beverage offerings, a gym, library, and co-working spaces and facilities for 90 bicycles.

Car parking will be in two basement levels and a mezzanine area.

The next consultation session on Thursday (20 January) will take place at 5:30 pm on Zoom. The new session is slotted for Thursday 3 February at the same time, also on Zoom.

Who in their right mind thinks these are attractive buildings designs. They are ugly concrete blocks similar to the public-housing they’re ripping down around Redfern in Sydney.
Why in the nations capital do we settle for such ugly poor quality design buildings. Wake up Canberra. 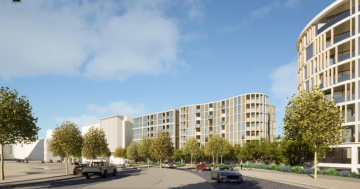