Facefit of the Bastard of Emu Bank 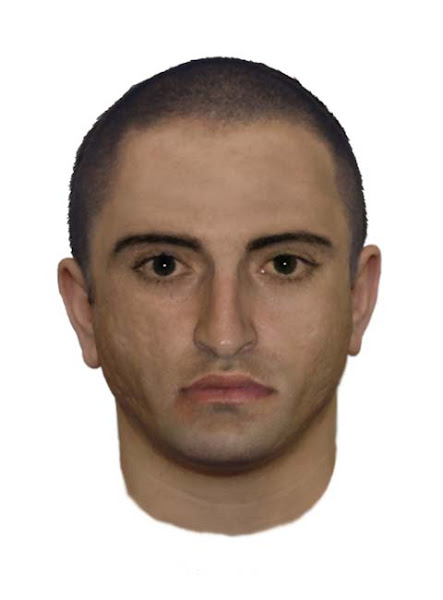 ACT Policing has released a facefit of the man believed to be responsible for an aggravated robbery at Emu Bank McDonalds in Belconnen in early March.

About 7.30 pm on Tuesday, March 6, a man and woman were seated in the McDonalds restaurant in Emu Bank when they were approached by a man with a knife.

The man threatened the pair before fleeing with the phone and wallet of the man.

The offender is described as having an olive complexion, between 30 to 40 years of age, approximately 173cm to 178cm tall (5’8 – 5’10”) with short dark-coloured hair and a medium build. He was wearing a dark cap, white shirt with blue writing on the front, dark track pants and white shoes.

The offender was seen to get into a white, early 2000s model Toyota Corolla hatchback with chrome hubcaps/wheels.

Anyone who may have witnessed the incident or is able to assist with the investigation is urged to contact Crime Stoppers on 1800 333 000, or via www.act.crimestoppers.com.au. Information can be provided anonymously.

I’m assuming those cheeks that look like the surface of the moon are the result of a serious bad-arse acne problem in his youth.

Shouldn’t be too hard to track down such individual.

“cheeks” and “bad-arse acne”. You don’t paint a pretty picture in my mind…

I’m assuming those cheeks that look like the surface of the moon are the result of a serious bad-arse acne problem in his youth.

Shouldn’t be too hard to track down such individual.

James Dof - 6 hours ago
I take the bus to get to the bus terminal with luggage and like I said it's 45 mins to civic and an hour less travel on the b... View
Julie Macklin - 6 hours ago
James Dof A bus every 15 minutes from Civic. In practice thought I imagine most people, even if there is a regular bus from w... View
James Dof - 10 hours ago
For me to catch a bus from Macquarie to Kingston it would be an hour and a half and an hour slower slower on the train than t... View
Business 3

Candace Aitchison - 6 hours ago
Lucy is amazing!! Such a beautiful young lady! It’s always such a pleasure going into the chemist 🙂 Congratulations Lucy... View
Anthony Crocker - 12 hours ago
I’ve always found her very helpful, friendly and knowledgeable. Congrats 🥳 View
Phyl Oliver - 13 hours ago
Congratulations Lucinda, you are at the best chemist ever! View
Sport 5

Sylvia Brooker - 13 hours ago
Thanks Leong kitchen, you will be missed by many. All the best for the future. View
Property 5

Katie Tranter - 18 hours ago
We’ve had a pair visit a lot recently. So beautiful 😍 View
Elizabeth Ann Thurbon - 20 hours ago
What about in the home garden? Do they make a good display when grouped together in a mass planting?... View
News 17

All work on the West Basin area should cease until a complete environmental and heritage assessment has been made, according to...
Best of Canberra 48

@The_RiotACT @The_RiotACT
Two ecosystems in the ACT have been classified as critically endangered as the government moves to standardise the classification of threatened ecologies with the Commonwealth https://t.co/LMwDBDOveT (8 hours ago)

@The_RiotACT @The_RiotACT
Have you seen 15-year-old Hayley McNally, who was last seen in Amaroo on Saturday night? https://t.co/n7vkkxaoHC (9 hours ago)

@The_RiotACT @The_RiotACT
In this week’s RiotACT newsletter: which Target stores are closing? What’s the latest COVID news? Why are Braidwood’s historic trees set for the chop? Catch up here https://t.co/7vn958SSUV (9 hours ago)