Facefit of the Emu Bank mugger 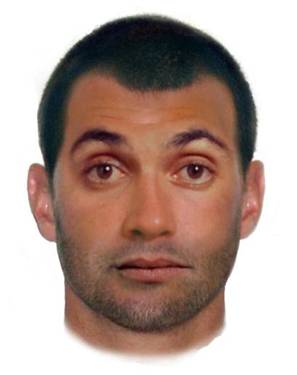 ACT Policing is seeking assistance in identifying the man pictured below who robbed a 16-year-old boy at the Belconnen Skate Park at Emu Bank on Monday afternoon (March 5).

About 4.10 pm the boy was approached by a man at the front of Lake Ginninderra College who asked the boy for the time. The boy responded and kept walking.

The man called out again and when the boy turned around was confronted with the man holding a knife. The man threatened the boy and demanded his mobile phone, to which the boy complied.

The offender is described as Caucasian in appearance with an olive complexion, between 30 to 35 years-of-age, approximately 173cm tall (5’8”), of medium build with short, dark-coloured hair that was thin through the middle.

He was wearing dark blue jeans and a yellow T-shirt, and was unshaven.

Anyone who may be able to assist with the investigation is urged to contact Crime Stoppers on 1800 333 000, or via www.act.crimestoppers.com.au. Information can be provided anonymously.

JC - 29 minutes ago
Life doesn’t work like that. It’s quite clear that for the last year they have been in dispute with the builder over this... View
Nell Feneck - 1 hour ago
Another well done project by ACT Labor 🤦🏽‍♀️🤦🏽‍♀️🤦🏽‍♀️ View
nobody - 8 hours ago
So the pool has been out of action for a year, and they are just concluding the tender process for repairs now, then the repa... View
Community 20

Ben Fittler - 29 minutes ago
Germaine Muller I know! Devastated he was always so nice View
Bec Swift - 2 hours ago
RIP Mr Frugii View
Chelsea Adhami - 7 hours ago
Any word on when the funeral will be? View
News 13

Sandra Bowe - 1 hour ago
Karin Hill thanks for the link Karen, just called the hotline as buzzing still evident in ceiling, good to get advice .. View
Sport 5

Andrew Dale - 4 hours ago
Rory Bourke I'm both mate 🥸🥴 View
Lucas Anasdow - 6 hours ago
The Left are pushing to have the Event Renamed as the Term 'Black' is deemed to offensive and upsetting for segments of the C... View
Rory Bourke - 7 hours ago
These days they don’t call it old, they call it experienced. View
News 3

Lyn Christie - 4 hours ago
Ian E Wheeler maybe somewhere you can register if you don't see community nurse and are unable to get out to receive the shot... View
Tom Porter - 6 hours ago
Maybe the carer can arrange for the community nurse. It is not prohibitive. Then again the government could contract Aspen to... View
Ian E Wheeler - 7 hours ago
Needs to be a bit more organised than 'we might use community nurse.' Not everyone stuck at home sees a nurse. View
News 3

jwinston - 6 hours ago
Watch “The Planet of the Humans”, a documentary by Michael Moore, to see the lie of renewables and so-called green energy... View
Lifestyle 27

Maria O'Halloran - 7 hours ago
I have one that shows itself every now and again over the past 5 years. View
Food & Wine 9

Ol L - 10 hours ago
How can Mr Barr tax them if their not here? Seems logical that the public service can be based anywhere, COVID seems to have... View
show more show less
*Results are based on activity within last 7 days

Every year The Guardian runs a readers’ poll for bird of the year, which is effectively a vote for Australia’s...
News 17

Roasted garlic ice cream, pistachio and cherry essence, spearmint and salted caramel - these were the ice cream flavours that...
News 17

@The_RiotACT @The_RiotACT
Would you be able to tell if your child was having an epileptic fit? https://t.co/XsPnsYcdT1 (25 minutes ago)

@The_RiotACT @The_RiotACT
Yass Valley Council’s new director of infrastructure & assets is using the skills he honed in the military to address the town’s dirty, smelly water problem https://t.co/iDvUxKG7MR (3 hours ago)