Farewell to Rhys Summergreene, a man of generosity and compassion 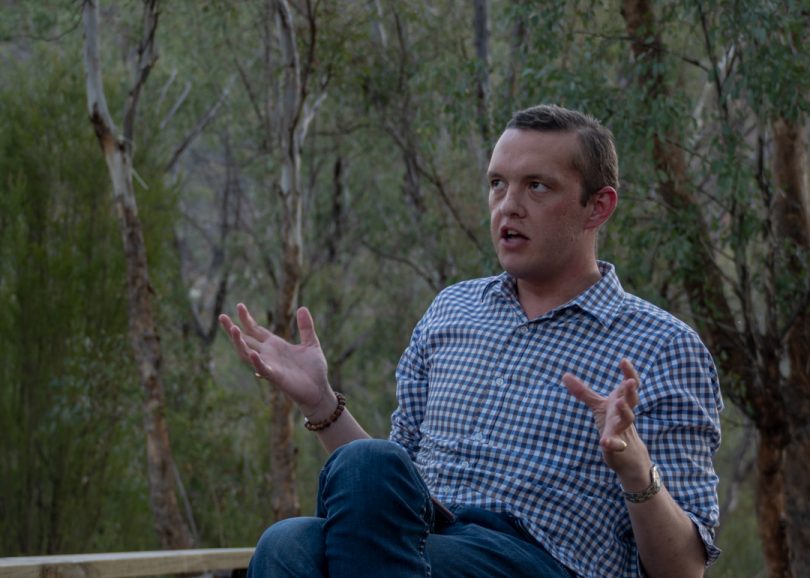 Young Canberra real estate agent Rhys Summergreene’s tragic death has saddened many in the ACT business community who remember his generosity, style, courage and unfailing commitment to others.

Summergreene died at just 28 in January after battling a highly aggressive malignancy with metastatic non-seminomatous germ cell cancer, diagnosed in 2017. While fighting for his own life, he raised $75,000 for childhood cancer sufferer Freyja Christiansen, spoke to troubled young men about finding resilience, and continued to give.

Menslink CEO Martin Fisk first met Rhys with his then boss, Richard Luton. “This bright young man came up to me, introduced himself and said ‘I do a bit of social media for Lutons – is there anything I could do for you? What you do for young men is fantastic and I want to get involved’. That set the tone for my entire dealings with Rhys. At every single organisation he worked for, he contacted me and asked how they could help.”

Rhys had been frank about dealing with depression as a teenager and struggling to cope with tough career experiences including losing a substantial amount of money in a failed business venture. Fisk says, ” I look at so many who go through bad things and turn in on themselves or take it out on the world. But Rhys became kinder, he wanted to help more people.

“He came to our summer camp for the kids. By that stage he was very ill, he couldn’t stand for his speech. When he was asked what he regretted most, he said ‘I’m going to be OK, because I’m going to finish soon. My biggest regret is leaving my family behind because they will cope with this for the rest of their lives’.

“His message was to be kind. To live life to its fullest because you never know when you’re not going to be here. Don’t worry about the bullies or what people say because you will be OK. We’ve had many speakers, but he’s the only one to have ever received a standing ovation.”

Rhys’s closest friend and colleague was Robert Peaker, with whom he worked at Peter Blackshaw, Tuggeranong. They’d been longtime friends but became extremely close in the last two and a half years of Rhys’s life.

Peaker says his best mate was “infectious, whether people were 15 or 80, he could relate to them. He was also the most generous person I’ve ever met, speaking pro-bono and organising charity events. If he was down to his last $50, he’d give it to you.

“What he was going through was scary and daunting, but he faced it head-on and never once complained. He lived life to the max with the time that he had and was always thinking about others.”

That included organising the Resplendent Ball which was not only a highly successful fundraiser but also drew together people from an often highly competitive industry. Resplendent also became a personal motto for Rhys, who drew on its original meaning ” to shine brightly” as he faced his cancer battle.

Robert Peaker remembers his best mate as someone who did nothing by halves. A casual dinner would turn into six courses, shirts would be changed a dozen times before the effect was right, and Rhys was always interested in the future, in things that were happening to friends. “His positivity is the main thing I’ll miss,” Robert says. “He always looked on the bright side, even on his deathbed.”

Lennock Motors’ Peter Munday, who also worked with Rhys, remembers his good cheer and generosity too. “He reminded me of an English gentleman in his 50s, not a 23-year-old. He always opened the door for a lady, would always write a handwritten thank you note to people he’d met. He’d send a handwritten birthday card to all the customers to whom he’d sold a car.”

Munday says that Rhys was “a very caring person, a little bit unusual in that he was committed to being successful in life, to be good at whatever he did and that included a passion for the community. He was a gentleman well and truly beyond his years.”

Contributions can be made to https://www.acureforfreyja.com

Such an inspirational man who understood the value of contributing to the lives of others.

Went to school with him. Lovely man, we'll miss him.

If ever the expression of always be the best version of yourself everyday was true, it must be this incredible person. ? sadly missed by so many.

A sad but beautiful story. That someone can face such adversity, but still be so generous, and show such compassion and positivity is just wonderful, and really shows the best of humanity The world needs more people like Rhys.

Beautiful soul... may you remain forever in our hearts ❤️😘💕🙏

How wonderful s this man ,what an inspiration, to all fantastic human, living his dream with so much support as all deserve a chance 👍👍💕

My beautiful friend Rhys Summergreene, so loved and so missed was incredible, and was helping others out even at the end..... ❤️❤️❤️

Wow what an amazing young man. A pleasure to read about someone so special, who did make a difference.

Rhys Summergreene I miss you more than words , thankyou my resplendent friend xx

Met Rhys once briefly for a property matter and I can honestly say I believe everything this article has to say about him. RIP Rhys

He was truely an exceptional and amazing human, beautiful tribute.

Heartbreaking! A beautiful young man in every sense of the word.

What a beautiful tribute Tara ❤

@The_RiotACT @The_RiotACT
More than 1000 Canberrans across six suburbs have been given the opportunity to change the look of their streets as part of a pilot forestry program. What trees would you like to see planted? https://t.co/dP9eU2Q2hq (41 minutes ago)

@The_RiotACT @The_RiotACT
The eight-year legal saga involving Witness K, which shed light on Australia's bugging of Timor Leste in 2004, has come to an end with the former spy sentenced in Canberra yesterday https://t.co/yIT4TW8TlT (51 minutes ago)