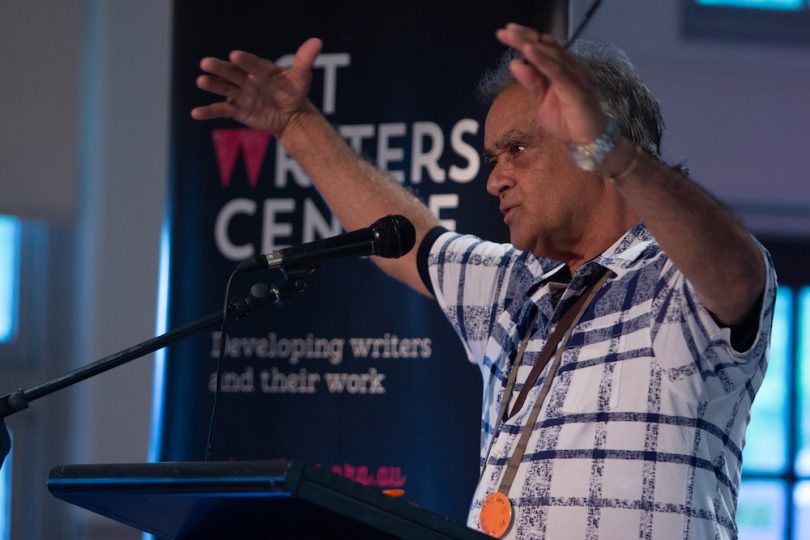 Canberra-based poet and Barkindji man, Paul Collis, has been awarded the ACT Book of the Year at the ACT Writers Centre Publishing and Awards Night for his work Dancing Home. Centred on a road trip to Wiradjuri country, Dancing Home is about Blackie who is out of prison, hungering for drugs and revenge but also to reconnect with his grandmother’s country.

There’s a stolen car, driven by a mate whose ‘whitefulla’ skin won’t attract attention, and at the end of the road, a cop in Dubbo who put Blackie in jail for something he didn’t do. It’s a speed-fuelled ride in every way and the funny, angry exploration of indigenous injustice has been dubbed Koori-noir.

Dancing Home won last year’s David Unaipon Award for an unpublished manuscript by an indigenous writer, and beneath the fast-paced yarn there is also an invitation to actively ‘take sides’ and to ‘think about poverty, power, privilege, suicide, and Aboriginal deaths in custody’.

Collis says he wrote the book as part of a creative PhD, never expecting it to be published. “My topic was Aboriginal masculinity in the 21st century, so this was not intended for any awards, but I think it reads well because it’s written in a storytelling voice.

“I grew up with good storytellers, Wongaburra and Barkindji people from Queensland. The storytelling humour which is in the novel had its genesis with those guys. I can still hear those voices and get the subtleties and I think that’s what’s moved people so much with the book”.

Collis spent much of his adult life as a teacher working with Aboriginal and white communities and has also worked on black deaths in custody. He says he is “alarmed and ashamed at how many people know nothing of the Stolen Generation, have no idea about the injustice we face, how ignorant people still are.

“Reading the book is a way they can engage. I find very little value in empathy without action, but it’s no good just hating. I want people to be moved on a personal level, so I’m asking the people in the middle to take sides, don’t just stand there doing nothing”.

Four other writers had been shortlisted for this year’s major ACT award: Merlinda Bobis for Accidents of Composition; Jackie French for Facing the Flame; Omar Musa for Millefiori and Rachel Sanderson for The Space Between.

The ACT Publishing Awards are administered by the ACT Writers Centre. Founded in 2004 to recognise, reward and promote writing by ACT region authors that have been published by small publishers or self-published in 2017.

The Fiction category prize went to Kirsty Budding for Paper Cuts and Robert Lehane won the Non-fiction category for Verity. The Children’s Literature Prize went to Maura Pierlot, for Trouble in Tune, and Paul Cliff won the poetry prize for A Constellation of Abnormalities.

The prize recipients, shortlist and judging panel were all announced simultaneously at the awards night, prompting questions from some in the Canberra writing community about the awards process. But newly appointed Writers Centre director Paul Bisset said that he is optimistic about the year ahead, and working with Canberra writers to develop their work, craft and professional practice.

Congratulations Paul! I wish I was there to hear you launch your book. I’ll certainly be getting a copy. You’re a legend. Love you brother.