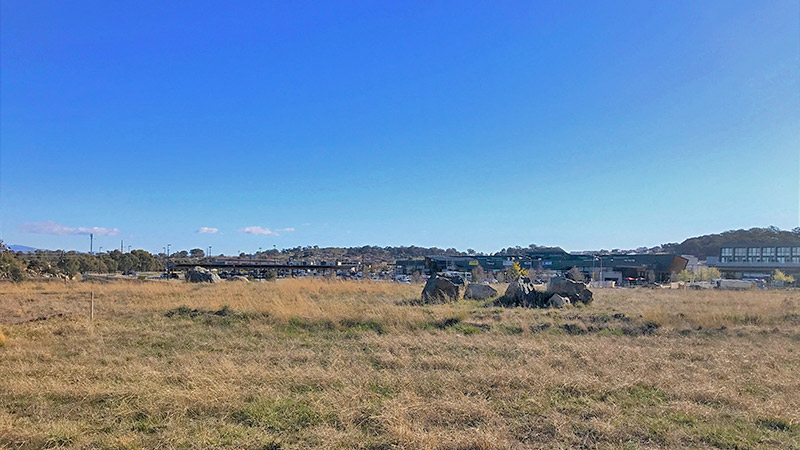 The vacant Casey land in question is due for release in 2021-22. Photo: ACT Government.

There are growing fears that long-expected community facilities to support the Casey Group Centre in Gungahlin will not eventuate, as the ACT Government continues to brush off calls for more certainty about upcoming land releases.

Gungahlin Community Council president Peter Elford says the planning directorate is refusing to be pinned down about the future of Blocks 12 and 13 Section 132 in Casey which the community has long viewed as sites for potential service and sporting facilities.

Currently zoned CZ1 Core Zone, the sites can be used for a mix of community, residential and commercial uses but the fear is that the financial imperatives and the demand for housing will eat up most of the space.

Mr Elford is calling for the Government to impose lease conditions on the land that would require a developer to provide certain facilities.

At present, EPSDD is considering 100 dwellings and 24,000 square metres of commercial space on the sites, something that puzzles Mr Elford.

“It would be a tragedy for more of it to go and part of this is that the Government tends to be unwilling to put in lease conditions or requirements in contracts for sale that seek to get a good community outcome.

“If they put out a CZ blockout without any requirements a stack of units will be built on it.”

Mr Elford said the 2018 Planning Strategy had also identified the area for densification and he is worried that the Government is including greenfield sites in its commitment for 70 per cent of new housing to be in infill areas.

“I have a sneaking suspicion this is an easier way for the Government to meet that commitment, than for example resuming a whole bunch of big blocks in Griffith or Red Hill,” he said.

There have been two previous studies into Casey’s needs, but the Government is awaiting the outcome of a wider study of community and recreation facilities across Gungahlin.

But Mr Elford has low expectations about what this consultation will actually deliver, calling it lightweight and disingenuous.

The two blocks in question were handed back to the government by the developer of the Casey Group Centre, and they originally had a requirement for a lawn bowls club, although demand for that particular use has waned in recent times.

“How much commitment is there from the Government to provide community facilities in that space consistent with the original intent around the bowling green?” Mr Elford asked.

He said the Government needed to be more proactive in putting better controls in place.

Mr Elford said there did not appear to be any strategic view of sporting and recreational needs in Gungahlin and it was every sport for itself lobbying for facilities.

“I know two or three sports that at different times were told or expected the Casey site will somehow be available for something – aquatots swimming, netball,” he said.

“Tennis ACT was mentioned as a possible tenant on the site before they got their place in at Amaroo.”

The owners of Casey Market Town have thrown their support behind the council’s push for more certainty around proposed community facilities.

“We would encourage the Government to deliver the community facilities as were intended in the original Casey Concept Plan.”

An ACT Government spokesperson said the Government continued to work on further refining the community and recreational facilities assessment currently being undertaken for the Gungahlin district, including work by SGS Economics and Planning and a YourSay survey.

The Government would soon release a listening report from the survey that SGS Economics would also consider as it finalises its report, which will guide the next steps for the Casey sites and the broader community and recreational needs for Gungahlin.

This may include rezoning land for community use, the spokesperson said.

A pool please! Especially now that Gungahlin and and AIS isn’t open for laps when things reopen!

I home it won’t end up with a place for more units.

Most of us have been patiently waiting for the promised amenities to actually be build. We all did our research on what had been promised when buying intro he suburb. It’s ridiculous that there is even consideration for these to be made residential. Casey is filled with families with kids that need to outdoor play areas and amenities. Kids need to be able to access these things easily, not rely on transport to other suburbs etc. When obesity and poor health is on the rise in young kids, it’s astounding these things aren’t prioritised, not just in Casey but all suburbs.

I have been asking the ACT Government to have a legitimate conversation with the Casey community on this and other matters for years. All I keep getting told is they are doing studies. Enough with the studies, have an actual conversation with us.

We want and need actual amenities for the community to support the existing people not more people where there is insufficient amenity. We want our previously committed play spaces for our children to be active outdoors.

Where are the Yerrabi MLAs on this topic? I thank the volunteer based Gungahlin Community Council for their ongoing support on this.