Finally Big Brother can talk to you

Simon Corbell brings the creepy to your Tuesday Morning with word he can now not only watch you from afar, but talk to you as well:

Mr Corbell said ACT Policing will use the speaker system alongside the current CCTV system, at the corner of Alinga and Mort streets at the Civic Bus Interchange.

“The speaker system will be an additional crime prevention tool around crime ‘hot spots’ in Civic, and will be trialled over three months from tomorrow, Thursday 12 September 2013,” Mr Corbell said.

“The speakers will broadcast a message to let people know that they are being ‘viewed’ and ‘recorded’ by ACT Policing.”

Signs will be installed to inform the community of the location of the speaker. The speaker will not have the capacity to listen to, or record, any audio, and is compliant with the ACT Government CCTV Code of Practice.

“People will be able to continue to enjoy time spent in Civic knowing that CCTV coverage will improve safety and security in the area,” Mr Corbell said.

“The Justice and Community Safety Directorate will evaluate the effectiveness of the CCTV speaker system once the trial finishes in November.” 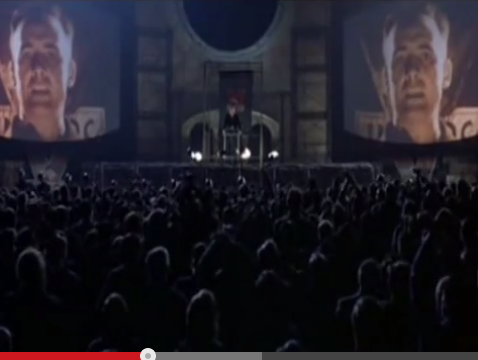 You there. Stop robbing that old woman or I shall be forced to resort to insults and sarcasm.

What a waste of money.
Why bother warning people, if they are doing the crime charge them.

Giving them a warning will just move the crime to somewhere that isn’t under video.

If it starts giving updates on government achievements or playing martial music I’ll begin to get worried.

I’m looking forward to the May Day celebrations.

The audio had me waiting for it to say THIS IS THE VOICE OF THE MYSTERONS. WE KNOW YOU CAN HEAR US, EARTH-MEN.

If it starts giving updates on government achievements or playing martial music I’ll begin to get worried.

Does the CCTV system work reliably now then? I seem to recall it failing once or twice in the past.

Ten points to the first person to upload a video of a drunk person arguing with the speaker.

Speakers are a bit old-school. I would have thought these days they could just call them on their mobile.

No doubt sales of hoodies will rocket.

Well that’ll really work…. Not. If I were doing something illegal in front of those CCTV’s which I would not as I would be street wise. And even If I was not street wise and heard a voice booming over one of these’s CCTV speakers, I would be out of there like a shot out of a gun.