Findings of the ACTEW review. Break it up! 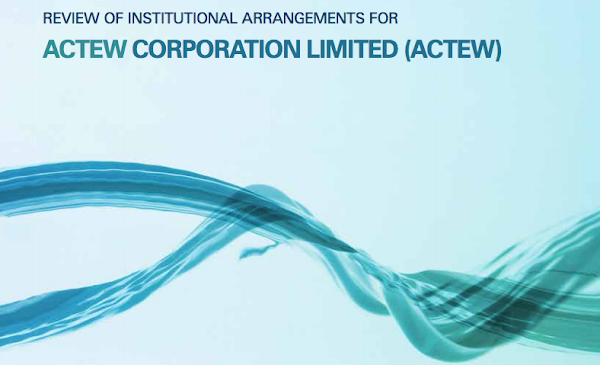 Andrew Barr has announced the outcomes of his review into ACTEW Corporation Limited (Aka “Power and Water”):

The key findings of the Review include:

— integrating responsibility for the complete delivery of water services, including stormwater services and secondary water projects through a single publicly owned entity;

— that the Government should consider establishing two separate entities, one for the responsibility for the water and sewerage business and the other to retain oversight of the Government’s 50 per cent interest in the ActewAGL Joint venture that supplies the electricity and gas services to the Territory;

— each year the Government outline the scope of activities it expects its publicly owned utilities to undertake and to ensure that the objects are reflected in and are consistent between the TOC Act and the ACTEW constitution;

— with regard to the water strategy “Water for the future: striking a balance” clearly specify responsibilities of participants with respect to supply augmentation decisions and allocate responsibility for the imposition of water restrictions to the relevant Minister responsible for water policy and enhance working relationships between ACTEW and relevant Government directorates with respect to land development activities in the ACT;

— making improvements to the regulatory framework;

— making changes to processes for ACTEW borrowings, major capital projects and dividend payments, and to various processes of interaction between ACTEW and the Government; and

— support ACTEW in its exploration of business opportunities in providing water and sewerage services to regions surrounding the ACT.

Minister Barr now intends to consult on these findings.

One Response to Findings of the ACTEW review. Break it up!
Filter
Showing only Website comments

“support ACTEW in its exploration of business opportunities in providing water and sewerage services to regions surrounding the ACT.” – didn’t think the “drought-proofing” from the big new dam would last long. What a shame Mr Barr’s land tax system won’t extend to the windfall gains from those whose NSW land holdings skyrocket in value when the get access to town water from Canberra. We need Jake Gittes on the case.

Capital Retro - 10 hours ago
I'm not interested in what the ACT government does with electricity because I don't use ActewAGL any more. View
phydeaux - 17 hours ago
Rather my point, JS9. “…without qualification”. With significantly different individual circumstances, to give an answe... View
Kathy Blunden - 18 hours ago
I was also totally shocked with my electricity bill. It is the highest bill I have ever received and I have solar panels!!!... View
News 7

Rob Quarmby - 10 hours ago
Most I’ve ever seen around my area this year hadn’t seen them for a long time before this... View
Daniel Palmer - 11 hours ago
Minus the fires, has me stumped why. View
The Garden, botanicus perfectus - 14 hours ago
Ann Gottaas View
Lifestyle 16

aussie2 - 15 hours ago
Here is another for the "shopping list". It is government responsibility to ensure its citizens have access to pools and othe... View
2902 - 17 hours ago
Imagine the money one could make building apartments on this site, right out the front of the proposed light rail track View
ChrisinTurner - 18 hours ago
There is not enough attention to maintaining services in areas with dense populations. The government seems to be working on... View
Opinion 75

Naimad Doowneerg - 15 hours ago
Bernard Miller not sure what you mean by "shear (sic) volume of adverse events and deaths". According to the TGA There have b... View
Garvin Francis - 15 hours ago
Nada Krstin So here’s totally what wrong with this whole anti vaxx, anti mask, anti lockdown argument. Its not about believ... View
Deborah Gale - 22 hours ago
Nada Krstin The vaccine gives protection and greatly reduce the likelihood of serious disease which is great. But children wh... View
Opinion 3