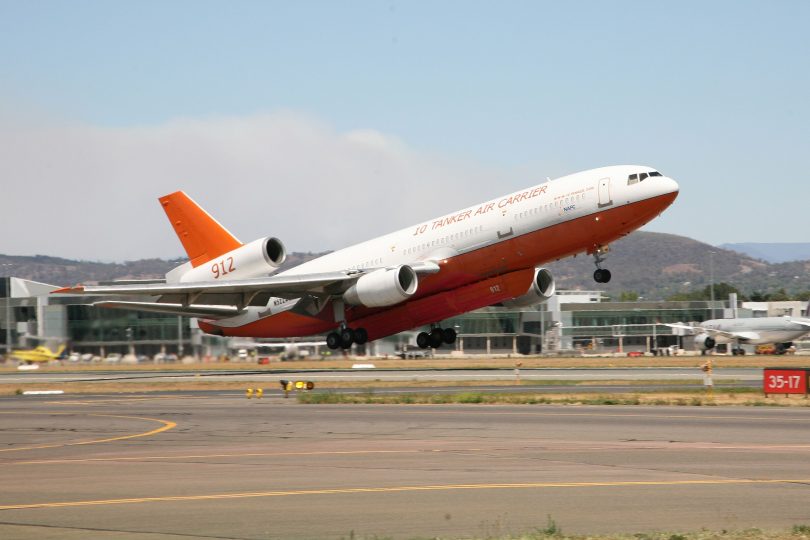 The very large air tanker (VLAT) that has been dropping pink fire retardant during the recent bushfire emergencies in NSW and the ACT will be undertaking a series of routine systems checks in the skies above Canberra and surrounding NSW this afternoon, including a water drop in Kowen Forest.

The ACT Emergency Services Agency (ESA) says Canberrans and those in surrounding areas will see the air tanker, known as ‘Bomber 912’, in the sky this afternoon between 12:30 pm and 1:30 pm, weather dependent.

“These planned system checks ensure the aircraft and its capabilities remain ready to respond to incidents,” an ESA spokesperson said.

The air tanker may be seen flying at a low level, approximately 500 feet above the ground and will have a white lead plane in front of it, a Citation Jet, known as ‘BirdDog 123’.

Since arriving in the ACT and becoming operational on 24 January, the VLAT has flown 29 missions delivering more than one million litres of retardant to fires in ACT and NSW.

Wayne Williams - 32 minutes ago
Lilly Walter tell that to the recently fatherless young fella in Brisbane, women commit family violence also View
Abbey Snell - 32 minutes ago
Samantha there is a non-gender specific sleepbus. I think this is a situation for equity. A large cause of homelessness for w... View
Monica Tiffen - 56 minutes ago
Great idea! View
News 2

paservank - 44 minutes ago
...or get rid of all the cars? (an equally stupid and self-centred idea) View
chewy14 - 5 hours ago
It's ridiculous that the government is deliberately creating situations that expose these vulnerable road users to harm yet t... View
News 15

Jamii Lee - 53 minutes ago
So you’d rather the building sit unused for a unspecified amount of time just so a few people (would love to know the figur... View
Breaking 1

ChrisinTurner - 55 minutes ago
Another great advantage of using unmarked Police cars. Why aren't they all unmarked? View
Property 4

chewy14 - 1 hour ago
This is a strange comment. Firstly, it assumes that the local ACT government is fully in control of house prices in the ACT w... View
Aneta Petreski - 1 hour ago
Isnt this most of Canberra?... View
Capital Retro - 2 hours ago
Glad to see the madness hasn't reached Tuggeranong suburbs yet. View
Lifestyle 13

@The_RiotACT @The_RiotACT
The ACT will receive up to 3000 more doses a week of the Pfizer COVID-19 vaccine and has begun accepting appointments for a second vaccination hub to be located in the airport precinct. The new centre will open Tuesday week https://t.co/X2SJ2ittyD (11 minutes ago)