This photo by Hasin: 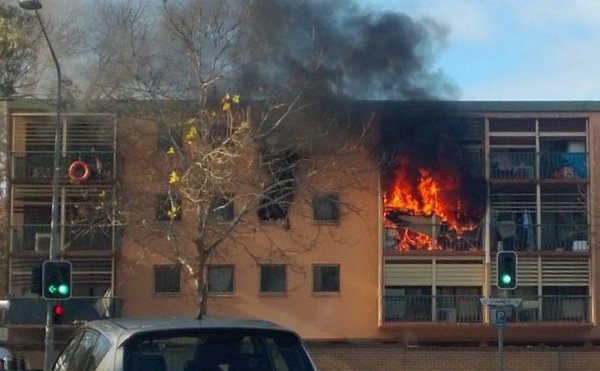 This coming in from the ESA:

ACT Fire & Rescue are continuing to extinguish the fire on the second and third floors.

ACT Ambulance Service intensive care paramedics are also on scene and have treated one female patient with burns to hands.

One male patient assessed for smoke inhalation, with two other patients also assessed.

Fire has been extinguished.

Extensive damage to two units on the second and third floors.

One female patient was treated for burns to her hands and smoke inhalation and was taken to The Canberra Hospital.

One male treated for smoke inhalation and will be taken to Calvary Hospital.

One other male patient was assessed and transport to hospital was not required. 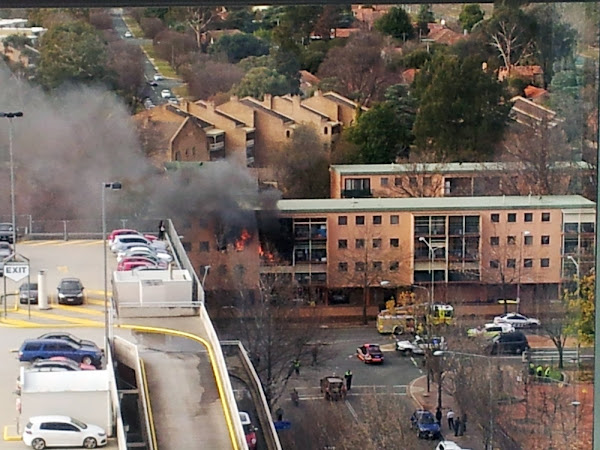 James has sent this pic in first.

More as it comes to hand.

If you have pictures or video send them in to images@the-riotact.com .

Deskmonkey sent this one in: 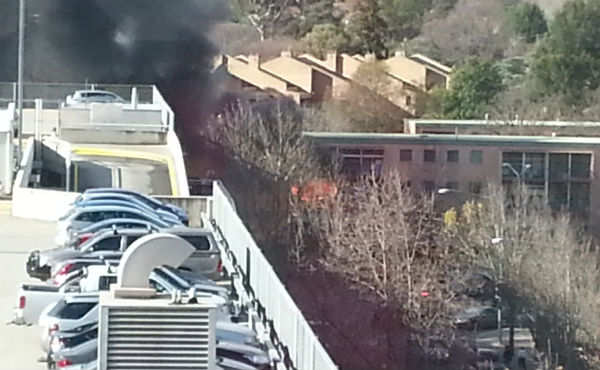 This in from Dominic from the Canberra Centre car park: 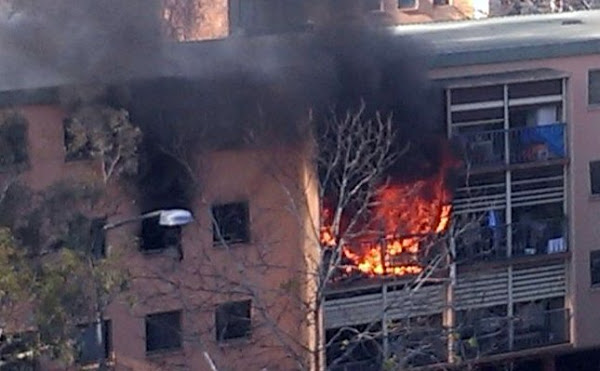 Barcham was down for the aftermath: 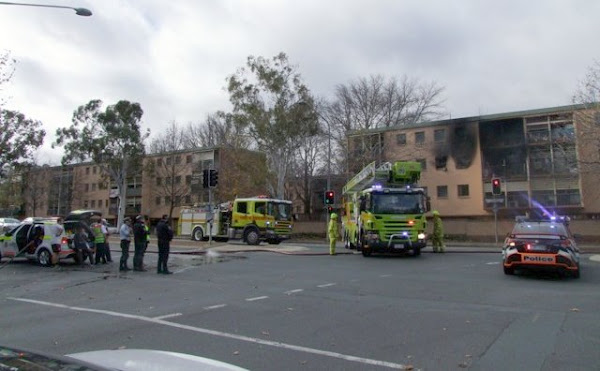 FURTHER UPDATE: We’re seeing reports of an explosion causing the fire. Will update as it comes to hand.

Police have put up the following release:

ACT Policing is investigating a suspicious fire at the Bega Court flats in Reid this afternoon (June 25).

About 2pm police attended Block 7 of the Bega Court flats after reports of a fire and explosion.

The fire was extinguished and initial assessment by fire investigators deemed the fire as suspicious.

AFP Forensic Services will work with ACT Criminal Investigations to determine the cause of the fire.

Police would urge anyone who may have witnessed suspicious activity in or around the Reid area to contact Crime Stoppers on 1800 333 000, or via the Crime Stoppers website on www.act.crimestoppers.com.au. Information to Crime Stoppers can be provided anonymously.

xtamatic sent in a big set including this one:

Took these today, some from before the fire and police got there. 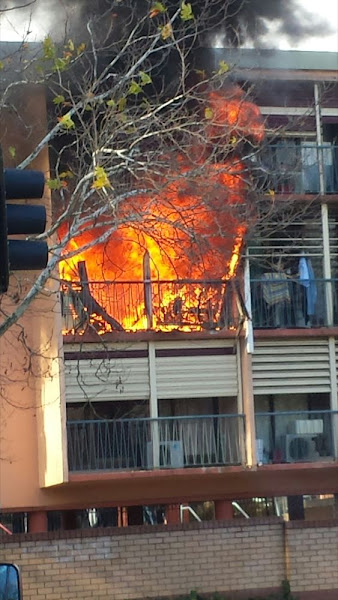 Here’s the full slideshow, send them in to images@the-riotact.com .

Was that the apartment that had the TV on 24/7 that you could see from the street? If it was a meth lab then some people will be sleeping easily tonight whether they want to or not.

It looks like the one that has a resident who likes to hoard things living inside – I enjoyed checking out what new crap was on the balcony when I have been waiting at the lights.

I doubt the fumes will be a concern for people who spend their day huffing paint and super glue.

Our fire fighting budget must be a little lean at the moment, considering the fire hose from the tanker in pic #5 has massive holes in it just near the traffic light. Quality.

Our fire fighting budget is pretty good compared to a lot of places. Although it costs a fair bit to replace a hose each time some numpty runs one over.

Was that the apartment that had the TV on 24/7 that you could see from the street? If it was a meth lab then some people will be sleeping easily tonight whether they want to or not.

So little sympathy because it’s public housing? I was in Civic at the time and the fumes were bad enough from there.

Very worrying if you live in the flats.

By chance I just happened to drive past this a few moments ago. A bit of excitement for the afternoon. There were certainly plenty of plods about for the wide ranging road closures.

Who reckons they should pour petrol on it

The smell of petrol would just attract the rest of the residents.

So, how much in compo, disability benefits and rebuilding is this going to cost taxpayers? Will we have to replace the meth lab equipment that was damaged too?

Too much Breaking Bad for some people 😛 I hope no one died or got severe burns, then I can have a good laugh about the meth / drug lab related jokes haha

Wow, looks like it’s contained to one apartment… damn asbestos.

Lovely to see so much compassion. Coz clearly anyone who needs government housing is scum. There couldn’t possibly be any decent people in there o.O

Our fire fighting budget must be a little lean at the moment, considering the fire hose from the tanker in pic #5 has massive holes in it just near the traffic light. Quality.

How many thousands worth of improvements I wonder

Well done RiotACT. Beat all the local media to the post with pictures. Great job.

The bigger well done to our keen eyed readers with great news sense who took the photos and got them into us!

Naturally. It’s not like smoke inhalation in the middle of the day is out of the norm for a resident of the Bega Flats.

More pix in and a slideshow.

I can hear developers cheering from here.

Who reckons they should pour petrol on it

Sophia Harris - 2 hours ago
Jimena Medway these wasps have nothing against Dad View
Karen Hardy - 4 hours ago
Helen Stafford WHAT DID I TELL YOU View
Acton - 13 hours ago
I use a trap which is effective in catching individual wasps and discourages nesting. The trap uses a European wasp attractan... View
Community 5

mickos - 6 hours ago
No such thing as pro-active policing ,only reactive policing thanx to the ACT 'government' that's never given a damn about la... View
Food & Wine 1

MERC600 - 7 hours ago
Always good to see a new industry opening up in the region, although I didn't have a clue where Capricorn park was. So did a... View
Lifestyle 2

bikhet - 8 hours ago
Nah. Got common grass skinks and marbled geckos though. Got another type of gecko too but haven't been able to identify it. View
DJA - 9 hours ago
Don't see any blueys in the backyard, but do see dragons (I think they are jacky dragons) and cunningham skinks. View
News 15

Michael Ilsley - 12 hours ago
How lucky are those children going to be being taught by such an incredible person. View
Rhonda Maxwell - 16 hours ago
Brad is an amazing young fella who is living a full life. His family and friends are s wonderful support as is his footy team... View
Pam Perkins - 16 hours ago
A very inspiring young man all the best in all your future endeavours and wonderful community support... View
Community 11

John Beagle - 13 hours ago
100% correct Gordon. The toilets are a disgrace. They appear to be the original 1999 edition, and the only illumination is on... View
Opinion 54

JC - 14 hours ago
It was a private facility unlike those in Kambah which you describe. The only fault of Government here is that they have let... View
Community 8

@The_RiotACT @The_RiotACT
RiotACT’s weekly newsletter brings you a regular dose of free local news so that you never miss out on the big Canberra stories and conversations https://t.co/tXZol5UP6u (2 hours ago)

@The_RiotACT @The_RiotACT
Local sport survives thanks to the dedication of volunteers. After decades with @NetballACT, including helping it survive insolvency in 2017-18 and then COVID-19, Louise Bilston has called time - although the passion remains https://t.co/uWx1fICLyo (4 hours ago)

@The_RiotACT @The_RiotACT
Documentary that tells the story of the Queanbeyan family behind Bell’s Amusements has been shortlisted for SBS’s Australia Uncovered series https://t.co/5wpvXyloYp (6 hours ago)