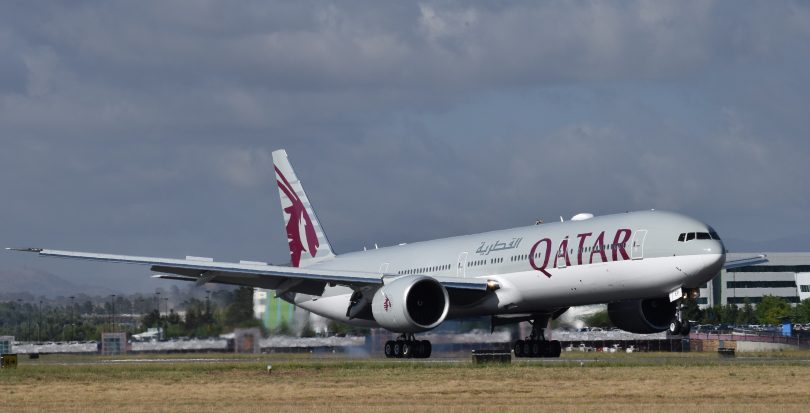 There are now two international airlines servicing Canberra with the arrival today of the first Qatar Airways flight to the national capital.

The Boeing B777-300 from Doha touched down at 9:25 am, with passengers treated to a water cannon salute soon after landing.

VIPs on the flight, the start of a daily service between Canberra and Doha, included CEO of Qatar Airways, Akbar Al Baker, and the Australian Ambassador to Qatar, Dr Axel Wabenhorst.

Qatar Airways joins Singapore Airlines, which recently announced that it would drop its direct Wellington link but introduce daily flights to Singapore from 1 May, in servicing Canberra.

After a fly-over of Canberra city, the flight was greeted by Canberra Airport’s Executive Chairman Terry Snow and Managing Director Stephen Byron, along with the ACT Chief Minister, Andrew Barr.

Chief Minister Andrew Barr said the arrival of Qatar Airways was a significant boost to capacity into the city and the Territory’s international tourism efforts. 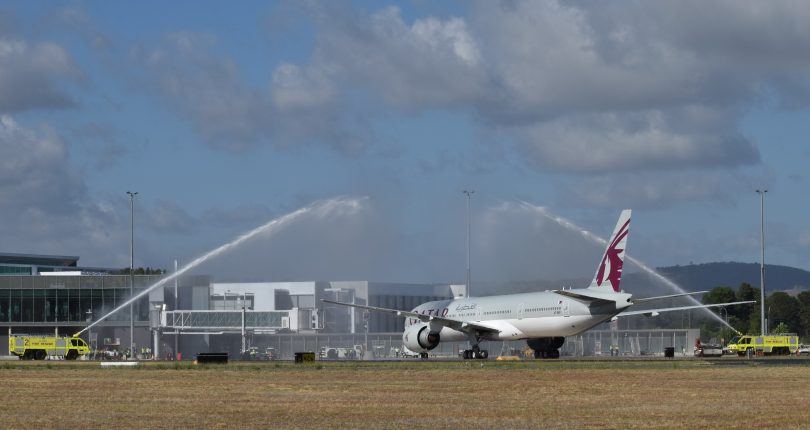 “A daily flight with an aircraft of more than 300 seats is going to add more than 120,000 seats [a year] into the Canberra market,” Mr Barr said. “From an outbound perspective, it gives Canberrans the opportunity to travel through Doha to numerous destinations. The European ones will be particularly popular but Qatar Airways’ network connects to hundreds of cities around the world in a quality product.”

Mr Barr said the new Qatar service provided confidence that this model could work for airlines. Although Singapore had axed its direct Wellington link, Mr Barr said the Government had not given up on the route.

Mr Akbar Al Baker said Qatar Airways was delighted to be expanding its reach in Australia, by launching its fifth gateway.

“In 2016, we launched flights to Sydney and Adelaide, clearly demonstrating our commitment to the people of Australia. We are extremely happy to be offering our loyal Australian passengers the chance to explore the newest and most exciting destinations we have added to our global network in the past year, including many European cities such as Dublin, Kyiv, Prague and St Petersburg. We are also confident that Australian travellers will be as excited as we are about our many upcoming new destinations set to launch this year, including Cardiff, United Kingdom; Malaga, Spain and Mykonos, Greece.”

Qatar said the inaugural flight’s Boeing B777 was retrofitted with the airline’s Qsuite, which includes the industry’s first fully lie-flat double bed, a revolutionary quad design offering passengers a private and fully adaptable space, in addition to movable TV monitors and privacy dividers, which transform the space into an area perfect for socialising.

Mr Snow said the airport appreciated Qatar Airways’ strong support for the nation’s capital. “An airline of this stature will further boost Canberra’s reputation as a leading tourist destination, on the back of record numbers of international visitors coming in 2017, and Lonely Planet nominating the city a top three destination for 2018,” he said.

Canberra Airport said the arrival of Qatar Airways gave Canberrans access to a global network of more than 150 destinations, of which more than 40 are in Europe.

The Boeing B777-300 aircraft carries 358 seats, including 42 seats in business class and 316 seats in economy, with business coming with fully-flat beds.

It was exciting being there to see the aircraft land, do an inspection and come home to check their great prices!

Welcome to the Capital Qatar!

Did the passengers get wet?

Hurry up and put Bali flights on.

Knocking $300+ or 3 hours bus time off international trips. Thanks Qatar! We’ve been waiting for you. 🙂

There’s still a “technical stop” of 1hr 30 mins in Sydney, its not a direct flight to Doha.

Lynne Audsley at least it’s priced as a direct flight!

I came across a flight that appeared to miss the Sydney stop and was direct.

not possible. All flights stop in Doha both ways.

Mark Scarborough it’s same flight number all the way via Sydney. Maybe that’s what you saw.

And Ainge assume you mean stop in Sydney both ways. They do of course stop in Doha too!

Canberra’s runway isn’t long enough to allow a takeoff with a plane full of passengers and enough fuel to make it across the Indian Ocean, hence the stop in Sydney, outbound. Inbound, the and has burned most fuel, and landings need less space anyway