Fithabitz: mornings by the lake 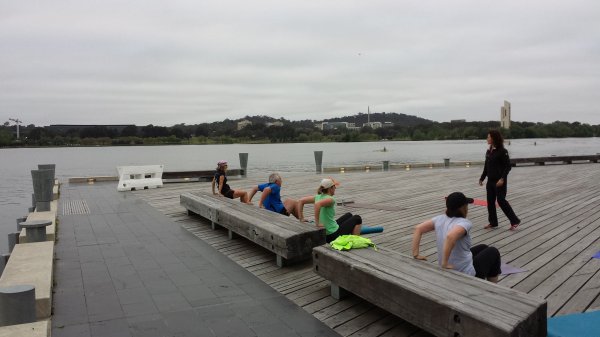 There are two things that are important to me from any exercise class or event. I want to get a good, safe workout, and I want to have a good time doing it – two things that may seem mutually exclusive, but are not, I promise.

Last week I found myself at Lake Burley Griffin at 6.15am on a Wednesday to try an outdoor circuit class run by Jane Livingstone, of Fithabitz. It was promising from the start, with friendly introductions and smiling faces despite the hour. I reckon there might have been maybe nine or ten of us there that morning. It seemed there was a good chance my ‘good time’ criteria might be met – for me the hard work is always abated when I have brothers-and-sisters-in-arms to suffer alongside, and to crack a few jokes with.

With LBG as our backdrop we settled into warming up – some jogging to start, with dynamic movement (think side-steps and knees-up). Then we moved into some strength work, using our bodyweight and some of LBG’s conveniently placed benches and so on – have I mentioned what a cracking place LBG is to be at that time of morning? There were rowers on the water, some super-fit teenagers doing some sort of martial art around the corner, another couple of exercise groups and some solo runners and walkers. Despite the activity, it’s beautifully serene and calm. Then again, perhaps the sound of my heavy breathing drowned out all other noises and it only felt calm.

My classmates varied in fitness levels (also age, gender, size and shape) – which must be a challenge for trainers. Instead of giving us 20 of these, 20 of those and 20 of the other, Jane gave us timed efforts – that is, say tricep dips for 30 seconds (and another 30 later, and another 30 even later), which meant that we were all working to our own capacity, and that we all finished the exercise at the same time – nobody was left standing around. We segued into the first of two cardio intervals, which were hard. Well, they certainly looked it but I confess I couldn’t say for sure. I have a knee injury which prevents me running at the moment so I was torn between jealousy and relief as I was left for dust as my classmates took off running for three rounds of timed effort alternating between hard, moderate and resting. Here I should mention that happily Jane obeyed what I think should be a cardinal rule for all trainers by asking the group about injuries and limitations at the start of the class – and modifying options for me on the hop posed no problem (if you’re wondering why on Earth I’d try to train with a knee injury, I say this: use it or lose it. It’s better to keep moving – safely and within your limits – than sit around feeling sorry for yourself). 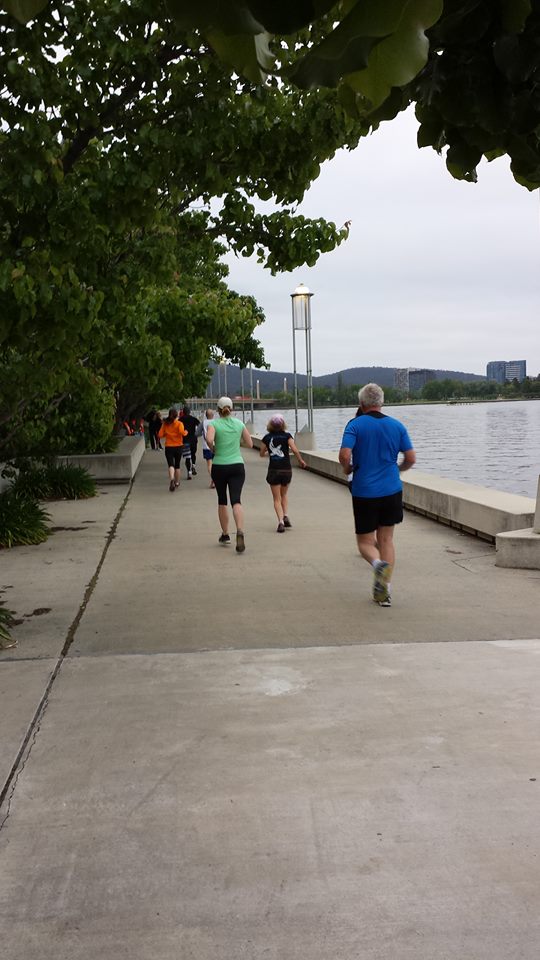 Running over (for the moment), we had more of the strength work to do, then another cardio bit, then some more strength and then stretching. It seems a lot for 45 minutes but it all went seamlessly from my perspective, and the time passed quickly. As a bonus, the 6.15 – 7am time frame means that it’s easier to get home and cleaned up and then to work at a normal time.

I had already been to one of Jane’s lunchtime classes, in Edison Park in Woden. This was a slightly smaller class size and a slightly rowdier bunch, but then again, most people are livelier at midday than at 6.15 am. The class itself was similar but different enough so that the LBG one still felt new. Likewise, the 45 minute time made it a manageable break in the work day. Edison Park is no LBG but is green and lovely nonetheless (manky under-maintenance duck pond notwithstanding).

Back to my twofold criteria for a moment though, and I have to say both were met. I worked hard enough for it to hurt the next day (in that good, slightly smug sort of way), and I enjoyed both the atmosphere of the location as well as the company of my classmates. Two thumbs up.

Speaking of thumbs, I did show my hand as a reviewer at the LBG class by seeking permission to take some photos (thanks to all who were there). As it turns out though, it’s your lucky day – if you are keen to try this class for yourself, Jane will run free trial classes on Monday 3 and Wednesday 5 November. Lakeside classes run from October until the end of April. See the website for further information: www.fithabitz.com.au

Jonathan Nicholl - 1 hour ago
Brian Day interesting article but it’s not accurate - the first fleet arrived in Sydney Cove on 26 January 1788. Indigenous... View
ghutch - 7 hours ago
A lot of good comments. Why don't we celebrate Oz Day on 1 Jan. Yeah I know you all still asleep from new year eve. But is th... View
Jenny McInnes - 8 hours ago
David Johnson it most likely was a public holiday there then View
Lifestyle 1

Colette Robinson - 2 hours ago
Adrian Fui Fui Moy but the path *is* being used for racing. Pedestrians and slower cyclists in either direction are merely ob... View
dolphin - 4 hours ago
despite your name you are neither rational or a very good observer. View
Dani Glatz - 6 hours ago
The simple answer Mark is there is no such thing as a cycle path in Canberra. Only Shared Paths. Would you choose a road with... View
Property 8

@The_RiotACT @The_RiotACT
Have the voices of post-Vietnam veterans been missed in the fight over the War Memorial expansion? Some veteran organisations say yes https://t.co/UC34DwlGFC (51 minutes ago)