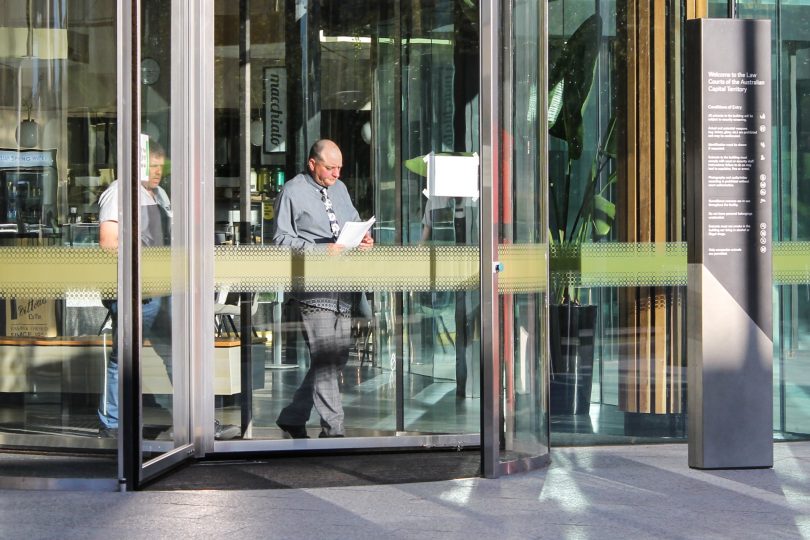 Mark Anthony Davis (right) exits the ACT Courthouse after being told he will not serve any more jail time for assaulting a woman and stabbing her dogs. Photo: Albert McKnight.

Three brothers kicking a football in a street were confronted by a man who would go on to violently assault a woman who came to defend them and stab her two dogs.

Despite Mark Anthony Davis, 45, admitting he was behind the violent rampage, he will spend no more time in jail after he was sentenced in the ACT Supreme Court on Thursday (15 April).

In the courtroom, Justice Richard Refshauge summarised the facts of the case.

On 3 July 2020, three brothers between the ages of 14 and 24 were playing football in a street in Charnwood when they were approached by Davis, who was drunk, speaking to himself and swearing.

He insulted the eldest brother, then went to a nearby house, grabbed a flip knife, and returned and told the young man: “I’m going to stab you, I’m going to kill you, I’ve had issues with you, why are you still here?”

A neighbour, who had heard the commotion, yelled at Davis to leave the brothers alone. He responded by saying he would kill her, then chased her into her house.

READ ALSO: Furniture worker awarded $5.6 million after being hit on the head by a 100 kg table

Davis forced his way into her home through a partly shut door before the woman’s two dogs moved towards him and he retreated to the porch.

When one of the dogs followed him, he stabbed the pet in the head.

Justice Refshauge said the woman attempted to protect herself and her dogs by grabbing a pole and hitting Davis with it, before he punched her in the face.

The second dog bit Davis, then the woman and her dogs escaped into her house. Davis left before returning and using a trolley to break two windows in her house.

When she came outside again, Davis took her to the ground, put his arm around her neck and dragged her from the porch into the garden bed as she struggled to breathe and believed she was going to die.

She bit one of his arms while her second dog bit his other arm before he stabbed the dog in the torso.

In the struggle, the woman managed to pull the knife off Davis and stab him twice in the lower leg, causing him to release his hold on her head, then she threw the knife in the garden out of his reach.

Other neighbours arrived to help the woman as she lay gasping for breath, upset about the injuries to her dogs.

Her pets were taken to the vet for emergency treatment, where both had their wounds stapled. They were given painkillers before being released so she could take them home.

Later that day, Davis was arrested after calling ambulance officers claiming he had been bitten on the leg by a dog.

Davis eventually pleaded guilty to a range of charges, including assault, animal cruelty, aggravated burglary, strangulation and possessing an offensive weapon with intent.

Justice Refshauge said there was no provocation by the victims and he described the assaults as “vicious and nasty” after seeing a video of the incident.

He said the woman, who had since died from unrelated circumstances, must have been very frightened by Davis and that the dogs were “understandably” reacting to a threat to their owner.

Justice Refshauge said Davis had been run over by a car when he was six years old and dragged for about 30 metres, resulting in him suffering an acquired brain injury.

He said Davis started drinking alcohol when he was 10 years old. By his late 20s he was consuming 20 to 30 drinks a day.

Justice Refshauge said alcohol dependence was Davis’s main problem and that he was “heavily intoxicated” during the assaults.

But he said the smash repairer and former abattoir worker was now abstinent, had expressed regret and said he knows he should not hit a woman.

Justice Refshauge took into account the 202 days Davis had spent in custody when sentencing him to three years and eight months’ jail.

But he suspended the jail sentence for an 18-month Drug and Alcohol Treatment Order followed by a 19-month good behaviour order, which meant Davis was able to walk free from the court.

Jeez, what do people have to do in this city before they spend some serious time in the pokey? These lowlifes seem to be able to cause extreme trauma to multiple victims, and face no commensurate penalty.

Got off easy I reckon