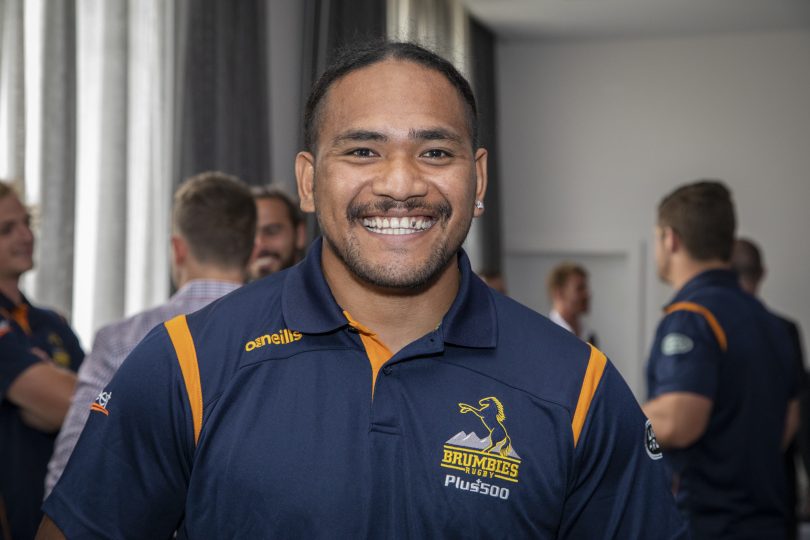 “It is what I was looking for. I love the team atmosphere here at the Brumbies, the boys welcomed me straight away,” says Brumbies new recruit Solomone Kata. Photo: Michelle Kroll, Region Media.

Solomone Kata’s talk to his teammates during the impromptu training camp in Newcastle resonated with Brumbies coach Dan McKellar.

Kata, a former schoolboy rugby union star in Auckland, had joined the Brumbies in the off-season after seven years in the NRL, first with the New Zealand Warriors, then with the Melbourne Storm.

Brumbies recruit Solomone Kata has told his fellow players that trust, strong relationships and feeling like a family build the best team culture.

Posted by The Sporting Capital on Wednesday, January 29, 2020

The essence of his talk to his Brumbies teammates wasn’t so much about football but more about family, effectively likening the culture at his new club to the one he had experienced at the Storm.

It was music to McKellar’s ears, having spent time in the Melbourne set-up observing firsthand the importance coach Craig Bellamy placed on a family-orientated culture where everybody looks after each other.

Says McKellar, “Solomone spoke about it at the camp. He spoke about the Brumbies being a special place. It says a lot about our club.”

Kata draws strength from a family environment, growing up with nine brothers and three sisters in Tonga before moving to Auckland in 2011 on a rugby scholarship. He switched to rugby league in 2013.

Now as a father to a two-year-old daughter, that environment has taken on added importance.

“The players and the club have been great. They are really family-focused,” says Kata. “It is what I was looking for. I love the team atmosphere here at the Brumbies, the boys welcomed me straight away.”

The importance of players feeling part of a family in terms of culture, and the relationship it has to athletic performance in a team structure can’t be underestimated. And it is why the successful clubs in any sport have it as a central theme.

Given the feeling of acceptance by his teammates, Kata says he is ready to repay on the field.

“I want to do my best. At the moment I don’t care where I play – wing or centre.”

He is looking to capture the form that saw him named in the NRL Nines team of the tournament in 2015, and become a destructive force for the Warriors playing in six tests for Tonga and five Internationals for New Zealand.

At 177 centimetres in height and weighing in at over 100kg he is built like the proverbial battleship with aggression developed through seven seasons of NRL.

Kata has shown enough in training and trials with the Brumbies to convince McKellar that he will make an impact this season.

“He brings a point of difference, he’s very powerful. He will certainly challenge a few defences,” McKellar said.

Given his contentment off the field and a strong desire to perform on it, there is plenty to indicate that he will become a crowd favourite at GIO Stadium this season.