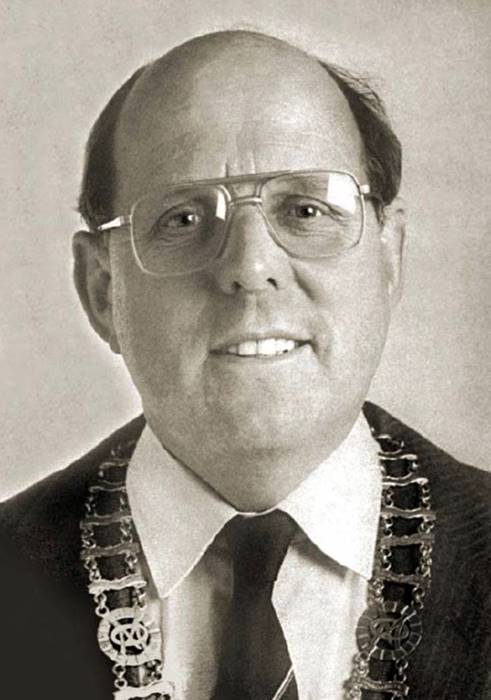 Also a long-serving local doctor, Dr Madew is being remembered for his significant commitment and contribution to the Queanbeyan community at a time of considerable growth. His vision for the town was to connect it with the nation’s capital as an eastern suburb of Canberra while retaining the integrity of the old town.

Queanbeyan-Palerang Regional Council Mayor Cr Tim Overall said he was saddened to hear of the death of Dr Madew, who served as mayor for 11 years.

“Dr Madew made a significant contribution to the Queanbeyan community during his life, both as an elected representative and through his Queanbeyan-based medical practice,” Cr Overall said.

Dr Madew served as an alderman with the Queanbeyan council from 1969-1991 and became the first popularly elected mayor in 1980 before retiring from the role in 1991.

When elected to the position of mayor as an independent, Dr Madew was reported as saying he wanted to concentrate on local issues.

“I considered that Queanbeyan had reached a stage of its development that we needed to stop and look at what had been accomplished,” he said during his campaign.

“Generally, we need to tidy the city up, to develop and encourage community pride. The local environment was the important issue.”

Cr Overall said Dr Madew guided Queanbeyan through a significant period of the town’s growth into a regional centre.

“During his term as mayor, Queanbeyan went through a boom period of considerable growth which included the opening of the Riverside Plaza with over 40 specialised shops, Grace Brothers and Coles department stores, the Airport International Motor Inn and Convention Centre and the Queanbeyan Tigers permanent clubhouse.

“This period of boom was followed by austere financial times, exacerbated by very high-interest rates which soared to more than 17 per cent and a recession in 1990-91.

“Mayor David Madew helped steer the Queanbeyan Council through these very difficult times with the implementation of sound financial policies and measures.”

Other achievements included the support he gave to the licensing of the local community radio which took much time and effort.

“David Madew was most supportive of community groups and made personal appearances on demand despite his very busy medical practice.

He lived much of his life near the Queanbeyan racecourse with his first wife Barbara, now deceased, and five children.

Queanbeyan-Palerang Regional Council will consider an official notice of condolence at its next meeting on 22 April.

RIP David you will be missed

He was a great doctor and mayor, remember well how he helped us when we had a problem. RIP Dr Madew

Great memory of him, he set the standard for a compassionate and caring GP

Karen Coleman that is very sad news. Sending my condolences to his family

He worked tirelessly for Queanbeyan hospital and his practice,condolences to his son David and family.

Condolences to his family. A lovely man.

I remember Dr Madew became the Mayor after the dark and depressing day of Fred Land as Mayor. Suddenly Queanbeyan started to develop under his guidance. Condolences to his family!

RIP our family Dr all those years ago

Hans Van de Zandt - 6 hours ago
Agree how stupid can they get They can’t plan a possum in a brewery Bizar that they can even think about it? View
chewy14 - 8 hours ago
Who cares if it does change. You could triple it and it still wouldn't be an issue. You were the one saying this would cause... View
Ashley Wright - 9 hours ago
Julie Macklin there is already a recycling facility in Fyshwick too small bang next to this proposal. View
Breaking 51

Acton - 8 hours ago
If I had told you a year ago that Australians were capable of such vindictive nastiness to each other, and governments of suc... View
Margaret Ford - 11 hours ago
Gosh Anne, the combination of Rod's heroic volunteer medical service in NE Victoria and your willingness to self quarantine s... View
Rosemary Brooker - 13 hours ago
Anne Cahill Lambert hope you get a solution. View
Community 4

JC - 14 hours ago
Indeed. Really makes you wonder what gets some peoples jaws flapping. This site derelict but people like Paul tries to make i... View
Opinion 5

John Hutch - 15 hours ago
The sneering goes both ways with narrow minded views from some of the arts community that somehow "mundane" jobs or infrastru... View
Sport 12

Maria Hawke - 16 hours ago
I will. Perhaps I should get him to join Facebook 😮. View
News 2

James75 - 16 hours ago
With the extensive drug trafficking in a single public housing complex, the ACT is losing 70 units because they are not safe... View
show more show less
*Results are based on activity within last 7 days

Canberrans with valid travel permits have been stranded at the Victorian border after NSW authorities changed their access requirements at...
Sport 12

Allan Hawke grew up in Queanbeyan over the road from the Raiders founders, the McIntyres. Allan’s brother, Phil, taught and...
Breaking 1

The $2.5 million proposal to demolish the Chisholm Tavern to make way for a McDonald's restaurant, which was submitted to...
Food & Wine 21

Canberrans are being prepared for the prospect of wearing a face mask out in public after ACT Chief Minister Andrew...
*Results are based on activity within last 7 days

Canberrans are being prepared for the prospect of wearing a face mask out in public after ACT Chief Minister Andrew...
News 28

Inner south community groups and the Fyshwick Business Association are joining forces to declare war on waste processing proposals for...

@The_RiotACT @The_RiotACT
Think you've got the perfect pooch? A fine feline or bonzer budgie? Prove it by entering them in the Domestic Violence Crisis Service 2021 Pets of Canberra Calendar! https://t.co/WTPBd6EQg9 (10 hours ago)

@The_RiotACT @The_RiotACT
Amber Nichols and Hayley Jensen have been 'besties' since they were 16 and have sung together on stages in Canberra and beyond. They have both moved on from TV talent show The Voice and catch-up regularly at a cafe between Canberra and Sydney https://t.co/3uzeA0aWSg (11 hours ago)