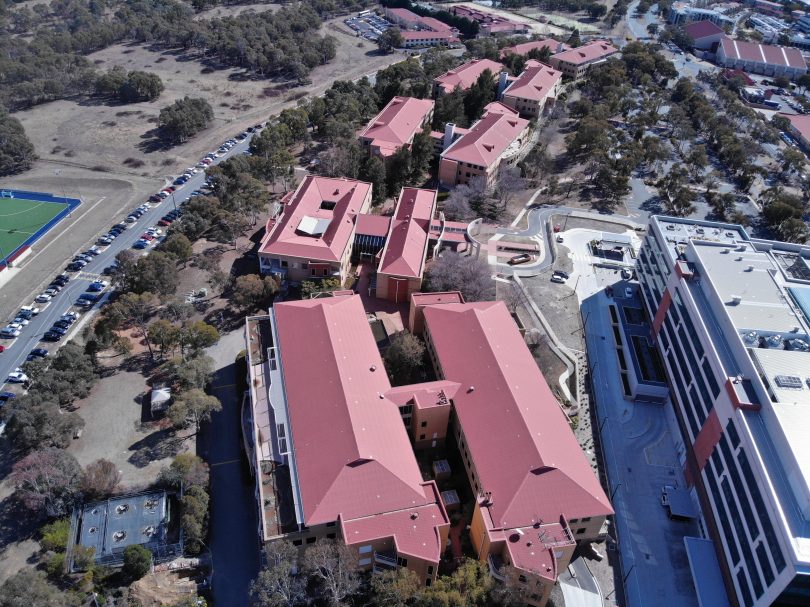 The former Tuggeranong Office Park is being converted into a retirement and aged village. Photos: Supplied.

The first project in a new model for retirement and aged care is taking shape in Tuggeranong, with the former Department of Social Services complex being transformed from the inside out in a $200 million redevelopment that will eventually be home to 500 residents by 2020.

The five-block site is being converted into a village with 380 apartments, ranging from one to three bedrooms, care facilities and services including retail, a library, bar, chapel and town hall. 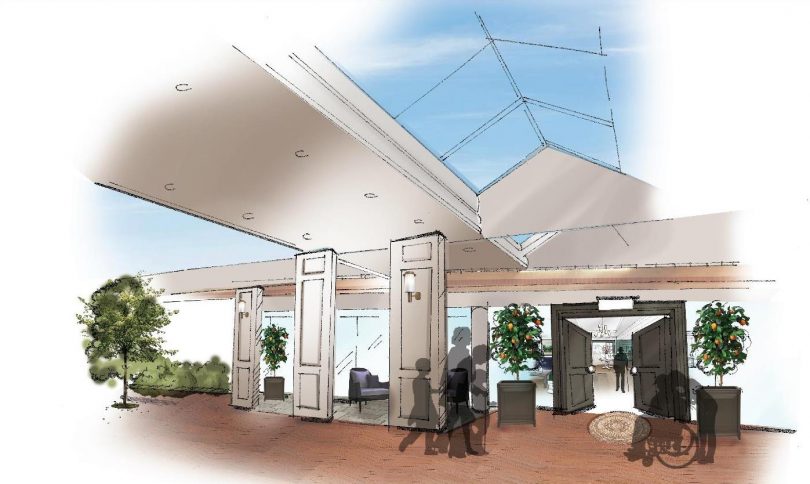 An artist’s impression of the front entrance.

Blocks B and C have been fully stripped and the internal demolition of Block A is well under way. Block B with 11 apartments and much of the communal areas are expected to be complete by July 2019 with Block C to follow a couple of months later. Stage One will comprise 93 apartments.

It is spending millions on the latest technology including sensors, voice recognition and predictive technologies. 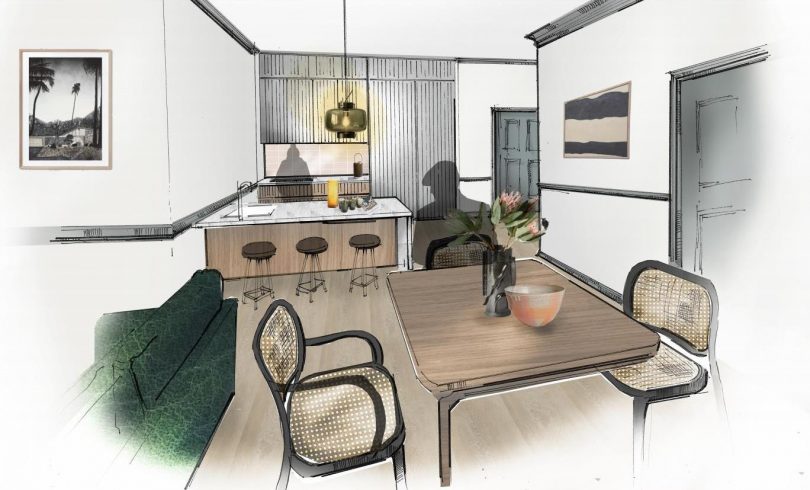 CEO Byron Cannon said the Tuggeranong project would be the first in a rollout of similar projects across Australia, with the site considered to be perfect for the company’s needs.

“They (Cromwell) approached us last year to look at the building. That building is absolutely perfectly built for repurposing to a residential feel,” he said.

“What’s been left behind in that building by DSS is an absolute blessing for us, including a 140-seat auditorium.”

Mr Cannon said LDK wanted the development to have a homely feel and be a vibrant community. 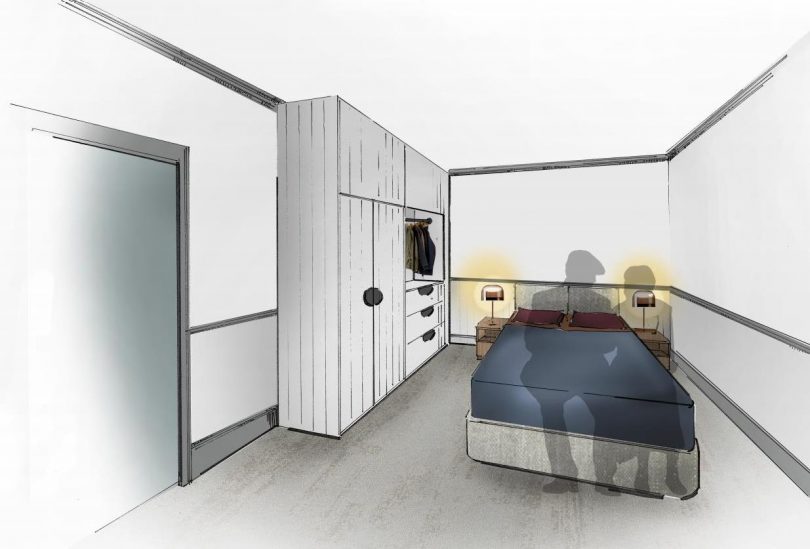 He said there was also big demand for seniors living in Canberra, where a lack of investment meant there was a large under-supply of that type of accommodation.

LDK (Love Decency Kindness) is promising a genuine alternative to retirement living and aged care with its one-move, integrated model.

Mr Cannon said the sector was very siloed with retirement living at one end of the spectrum and aged care at the other, with not many operators doing both.

“We’ve developed a model where we have a one-move promise. Once a resident moves in they’ll receive all the care they need through their ageing journey, without having to move,” he said.

“It’s a big promise that we make, and we’ll make sure we have all the care and quality of care that people need to age in place,” he said. 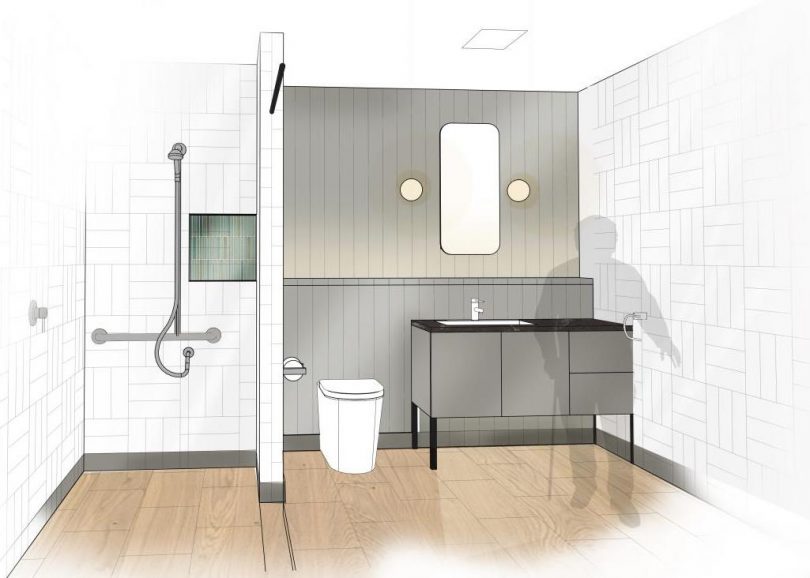 He said residents, or Village members, would have transparent costs up-front that were fixed for life, with no extra charges to move to higher levels of care.

The company is banking on free community memberships to anyone aged over 70 to embed it in the community and win business.

“Instead of marketing we decide to invest money in a community membership program to genuinely support people who want to stay at home for as long as possible because that’s what people want to do,” Mr Cannon said.

Mr Cannon said the company would be in a position to start signing up people early next month, which is earlier than expected due to the demand.

LDK is conducting forums at Town Centre Vikings with the next on Thursday 20 September at 10 am and Wednesday 26 September at 3 pm.

I think it is targeting retirement not residential

Retirement home - so no change really...😂

Very few windows by the look of the drawings.

Debby, should be about ready for when you retire...

I worked there a few times over the years from soon after it opened when it was the DSS National Office, well before Centrewhatever was dreamt up. Also attended the soft opening of F block. Actually at various times, on reflection, I worked in every block. But as another writer said, F block was the favourite and the gate behind E block was well used of a Friday afternoon.

It was the most expensive lease on a square metre basis the Commonwealth held at one stage, but for anyone working there it was luxury. The views are fantastic, and more than one staff member got to see their pride and joy being taken from the free car park by some local.

You knew you had done ok when a Secretary invited you for drinks and you got to see the private balcony. One Secretary used to practise his ornithology out there while another used to have beers out there while showing foreign dignatories his kangaroo herd.

I was always told it would be repurposed as an apartment complex or retirement facility one day. Guess they were right.

Worked here for a number of years when DSS split into FaCS and CSDA (to be changed to Centrelink) then FaCS changed to FaCSIA ... change change ... Wow imagine retirement here! Yes the Auditorium was pretty flash at the time! 🤔😳

Wow, that will be massive. A well suited building.

Simon loxton-should we book in now then????

Denise O'Connor did you know about this one?

I knew about it but I dont want to go!!

Denise O'Connor ha ha no ofcourse not but if it is a new model it sounds different to other plans.

Nikki Dee time for us to start service planning for 2020!

Wow is it going to be government funded?

Steven Broad you should have saved your spot.

Geoff not bad at all

You won’t have to go very far David Lander.

Paul Russell thank good- will see u there hey

We’re are they all going to park?

There was parking underneath....

Can I have my old room back?

“We’re putting the band back together”

Loved working in this building, little creek river ran through it, trees everywhere, Kangaroos on the lawn. Delightful. I'm glad it will be used and not demolished for more high rise

Yvon Nemchinov - 28 minutes ago
Well considering you have probably never lived under totalitarian rule, I expect you to lack understanding, Matthew. All of t... View
Carly Maree - 1 hour ago
I wonder if the people doing this use computers or phones? SMH. 🤦🏼‍♀️ View
Matthew Davies - 2 hours ago
Yvon Nemchinov sounds like you should talk to someone who has to watch people die of COVID who could have been saved. Freedom... View
News 77

@The_RiotACT @The_RiotACT
From building #WodenPlaza to making movie sets in #Hollywood and back again - this is carpenter Maury Cooper's epic journey https://t.co/Y2xFL2YN7A (27 minutes ago)